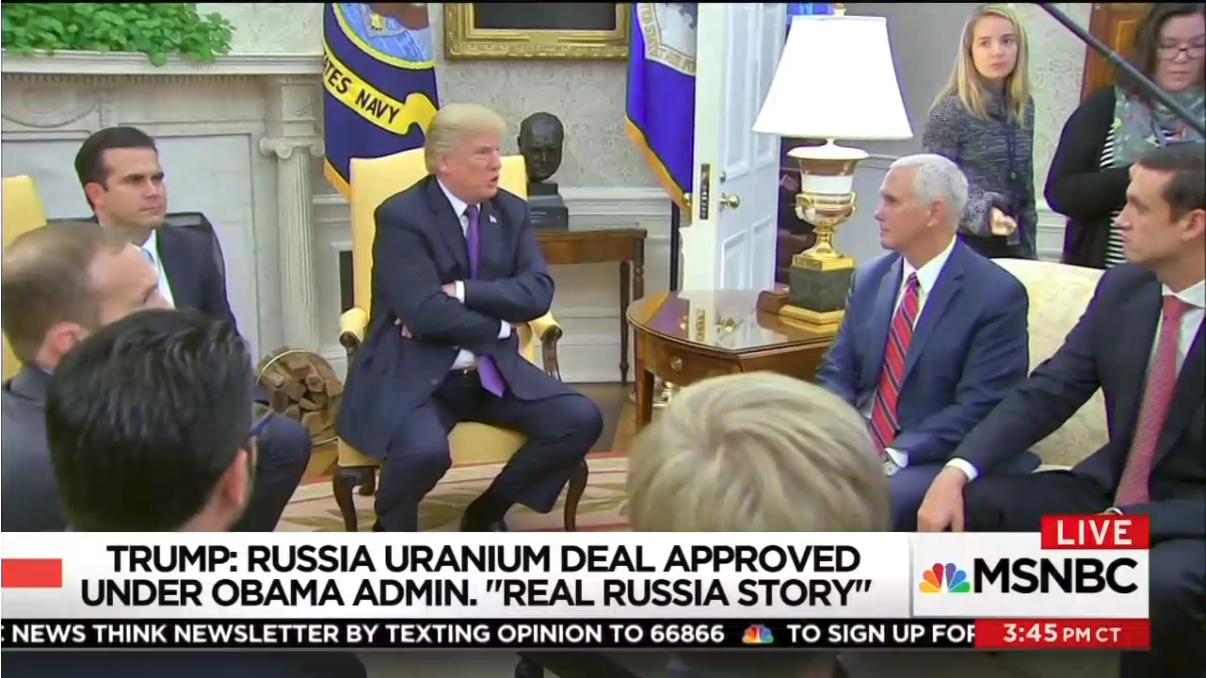 In a statement to the press on Thursday, President Trump scolded the liberal media for going out of their way to protect Hillary Clinton and not report on the new development in the Uranium/Clinton/Russia scandal recently revived by The Hill. But despite the President’s shaming and claims that the media didn’t have a choice when covering stuff Trump was talking about, the Big Three Networks (ABC, CBS, and NBC) all ignored the scandal.

“The problem is that the mainstream media does not want to cover that story. Because that affects people that they protect. So they don't like covering that story,” Trump said in frustration. “But the big story is uranium and how Russia got 20 percent of our uranium. Frankly, it's a disgrace.” But the new details revealed by The Hill were worth dedicating significant time to.

In an appearance on Fox News Channel’s The Story on Thursday, Peter Schweizer, the man who exposed the Uranium One deal in his book Clinton Cash, recalled how his original findings were collaborated. “The book came out in 2015, The New York Times, to its credit, ran a 4000-word front-page investigative piece confirming all the facts.”

“But it has been completely radio silences as far as the mainstream media is concerned and there has been no movement in the government, as far as I know, to really investigate this in a serious way,” Schweizer lamented. But he was excited by The Hill’s latest findings:

Well, as this deal was being approved in 2010, the FBI was, in fact, investigating this Russian company and was finding evidence of all sorts of nefarious activity, and it appears at this point that that information was never given to the CVS committee to even evaluate. The question becomes: “Why was the committee never even made aware?”

While NBC may not have reported it on NBC Nightly News, the story did show up on their cable news arm MSNBC. But there, they were doing everything in their power to downplay and discredit the story. “But Donald Trump apparently wants more airtime for the argument he tweeted about this morning,” mocked failed presidential campaign strategist Nicolle Wallace during Deadline: White House. “Quote: ‘Uranium deal to Russia with Clinton help and Obama administration knowledge is the biggest story that fake media doesn't want to follow.’”

NBC Reporter Ken Dilanian also chimed in to mislead and downplay the scandal. “It's a story that was brought to you by the mainstream media. It was first exposed on the front page of The New York Times in 2015,” he claimed, when in reality it was Schweizer who came along before the Times.

Dilanian downplayed the suspicious connections between Russian and Canadian entities and donations to the Clinton Foundation, along with Bill Clinton’s $500,000 speech in Moscow. “But there's no evidence that Hillary Clinton played any role in this decision, which ultimately went through the U.S. government approved it,” he falsely asserted, since someone from her office had to sign off on the deal.

“So Trump has a point, but at the bottom line is there's no evidence of wrongdoing by Clinton and there’s really not that much to cover. It's been covered,” Dilanian huffed. But according to the Times:

Whether the donations played any role in the approval of the uranium deal is unknown. But the episode underscores the special ethical challenges presented by the Clinton Foundation, headed by a former president who relied heavily on foreign cash to accumulate $250 million in assets even as his wife helped steer American foreign policy as secretary of state, presiding over decisions with the potential to benefit the foundation’s donors.

It's clear the Big Three Networks want to stay as far away from the uranium/Clinton/Russian scandal as possible. Instead of covering it, CBS actually did a report on the health benefits of walking; ABC reported on another neo-Nazi rally; NBC raved about the “sports equinox” where all major U.S. sports play on the same day.

MARTHA MACCALLUM: The Fusion GPS tale is not the only Russia headline in the news. There are still questions tonight about a 2010 deal that sent U.S. uranium to Russia. A tangled web that could include the Obama White House, the Clinton State Department, and the Holder Justice Department. Today in the Oval Office, President Trump accused the media of not paying attention to this big story.

PETER SCHWEIZER: I've said from the beginning when it pertains to Russia that there should be an investigation of any Russian attempts to manipulate the election, and we’ve had that, and there has been, no evidence, it's fair to say, of any collusion involving the Trump administration. 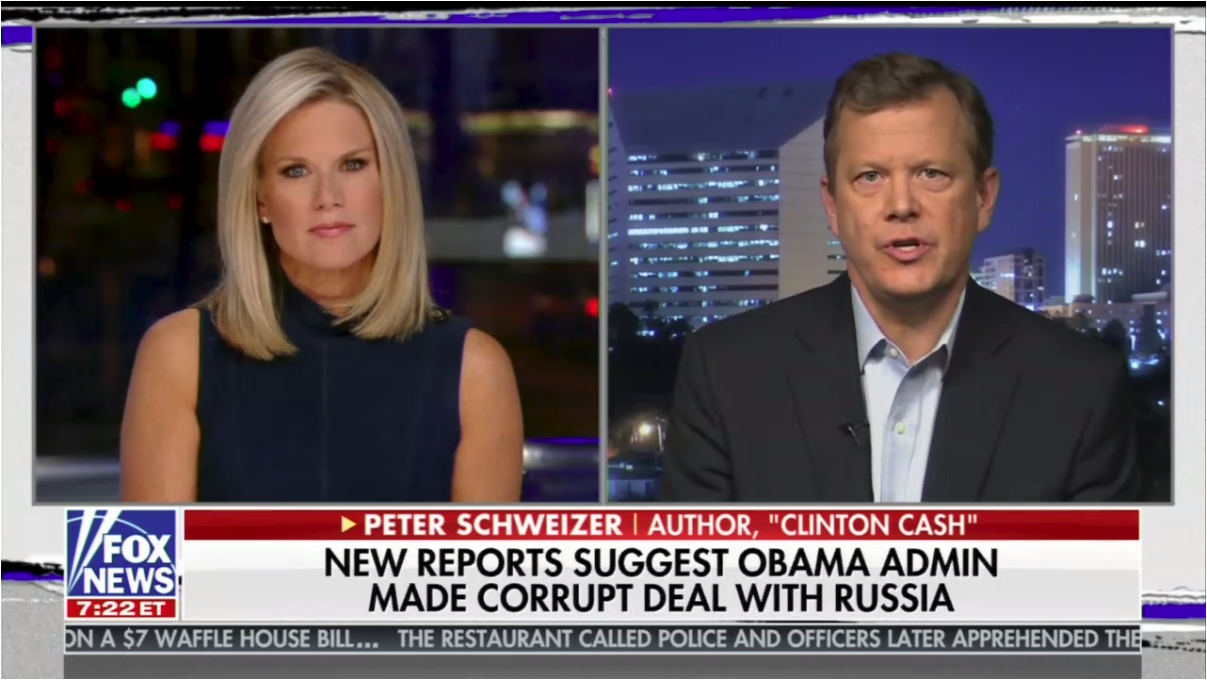 But I also said, look, if you're going to be consistent, you have to investigate all of it, and that includes collusion or cooperation between the Clinton State Department and the Russian government. You know, there has been very little interest in investigating this. The book came out in 2015, The New York Times, to its credit, ran a 4000-word front page investigative piece confirming all the facts, but it has been completely radio silences as far as the mainstream media is concerned and there has been no movement in the government, as far as I know, to really investigate this in a serious way.

MACCALLUM: So, you know, when you covered this story, and you did an exhaustive bit of work on it, you did not -- you weren't aware of what The Hill just found when they did some investigating that there was an ongoing FBI investigating and an informant who is tracking the connections between the Clintons, between Russia, between this uranium mining sale, and Hillary Clinton and Eric Holder were on the committee that signed off on the sale, that has to say it is okay for us to sell this resource to the Russians. Were you shocked when he read that story and saw that new connection?

SCHWEIZER: I was very shocked, Martha. Here's the thing to put into context. It can all get very complicated, but anytime there is a strategic company that needs to be sold and a foreign government entity wants to buy make it, it has to be approved by this committee. And one of the purposes of this committee is to make sure that the company buying it doesn't have hostile intent, but also that it's not corrupt, it’s not involved in terrorism, it's not involved in any other illicit activity.

Well, as this deal was being approved in 2010, the FBI was, in fact, investigating this Russian company and was finding evidence of all sorts of nefarious activity, and it appears at this point that that information was never given to the CVS committee to even evaluate. The question becomes: “Why was the committee never even made aware?”

SCHWEIZER: I think there’s only two possible explanations. One is just bureaucratic incompetence. They just never raised it. Or the second possibility is something more nefarious, which is either for political reasons or commercial reasons they did not want this deal stopped.