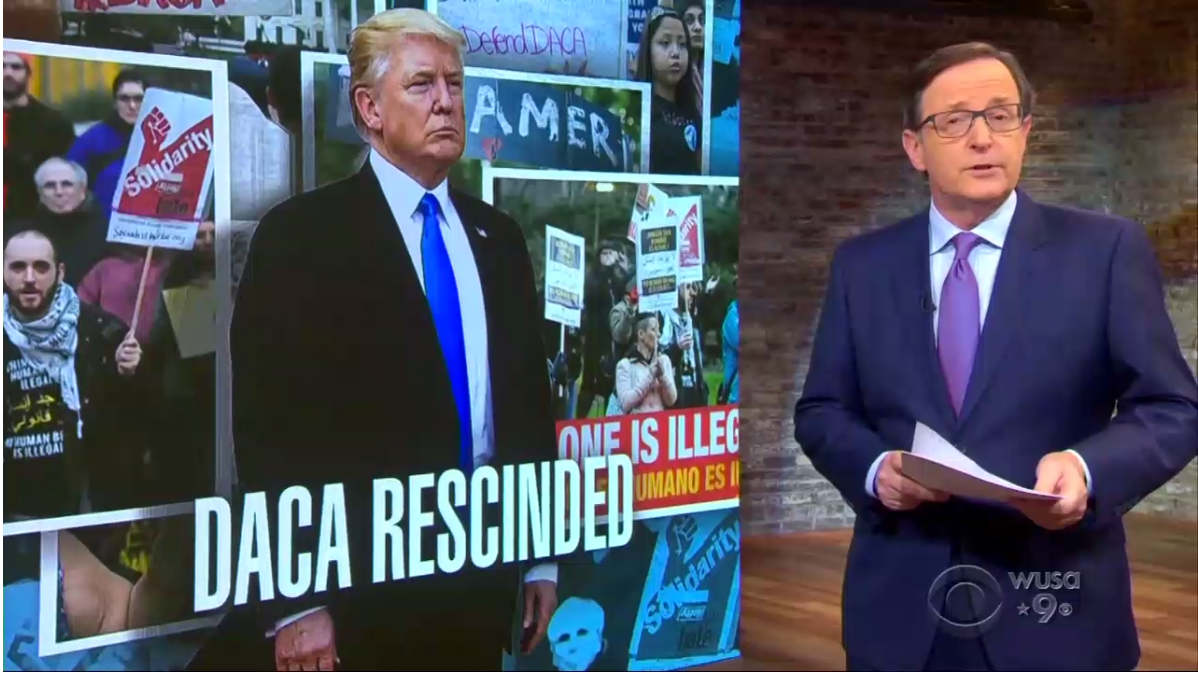 Liberal journalists were out in force on Tuesday in the wake of President Trump’s decision to rescind Obama-era executive action on immigration known as the Deferred Action for Childhood Arrivals (DACA). In fact, after decrying Trump’s decision to put Congress in charge of codifying Obama’s order during their morning broadcasts, the Big Three Networks (ABC, CBS, and NBC) spent 99 percent of their evening broadcasts railing against it with scant coverage of those who supported the move.

In all, the networks spent 17 minutes and 44 seconds of airtime lambasting Trump and his decision while only giving 11 seconds to those who supported him or thought he didn’t go far enough. The time totals don’t include commercials or network teasers for the stories.

CBS Evening News spent the most airtime reporting on DACA’s rescindment with nine minutes and nine seconds dedicated to the pro-DACA side. That time was spread over four stories and none of their coverage shared the opinion of Trump’s supporters or any other opponents to DACA. They led the evening off with it and pushed back their coverage of Hurricane Irma, which was approaching Florida.

When teasing the story, CBS anchor Anthony Mason described the situation as “shattered dreams,” playing off the term “Dreamers” the phrase used to describe those who receive DACA protections. “A promise kept by President Trump is a dream lost for thousands of undocumented immigrants brought to the United States as children,” he bemoaned.

CBS reporter John Blackstone touted the nationwide protests by citing those which occurred in large cities. He also hyped an interview with a rather defiant Dreamer who told him that “I know I'm vulnerable. That's valid. I know I can be deported tomorrow. But I'm not going to go down and give this Trump, or Sessions, the luxury of seeing me defeated.”

ABC’s World News Tonight came in second with four minutes and 48 seconds of pro-DACA bias and only two seconds for those who opposed it. In leading off the bias, White House Correspondent Cecilia Vega seemed to relish the intense backlash against the President. “Tonight protests from the White House to Trump Tower to Denver, Colorado. Students marching out of class,” she began her report.

As with all the networks, Vega and Anchor David Muir championed the condemnation of Trump from former President Barack Obama. “David, he said he would only weigh in on this administration when he felt like our core values are as a country are at stake,” she praised. “Well today, he said the move to rescind DACA is cruel, wrong, and self-defeating. David. He said ultimately this is about basic decency.”

ABC’s Mary Bruce was the only one reporter for the network to find any time to mention those who opposed DACA. But all she could muster was a literal two-seconds-long blurb, nothing that “but many conservatives disagree.”

NBC Nightly News dedicated three minutes and 47 seconds to pro-DACA coverage while giving the DACA opposition a staggering nine seconds. “Tonight the President is taking heat from the left and right. Immigration advocates say his move to end DACA is cold hearted but his base is accusing Mr. Trump of punting on a core campaign promise,” reported Kristen Welker.

“The President's own party is deeply divided. Members of his base say DACA should end now but more moderate Republicans believe Dreamers should be protected,” she added.

It’s only natural that the liberal networks would defend DACA, especially considering they pushed for it to begin with.