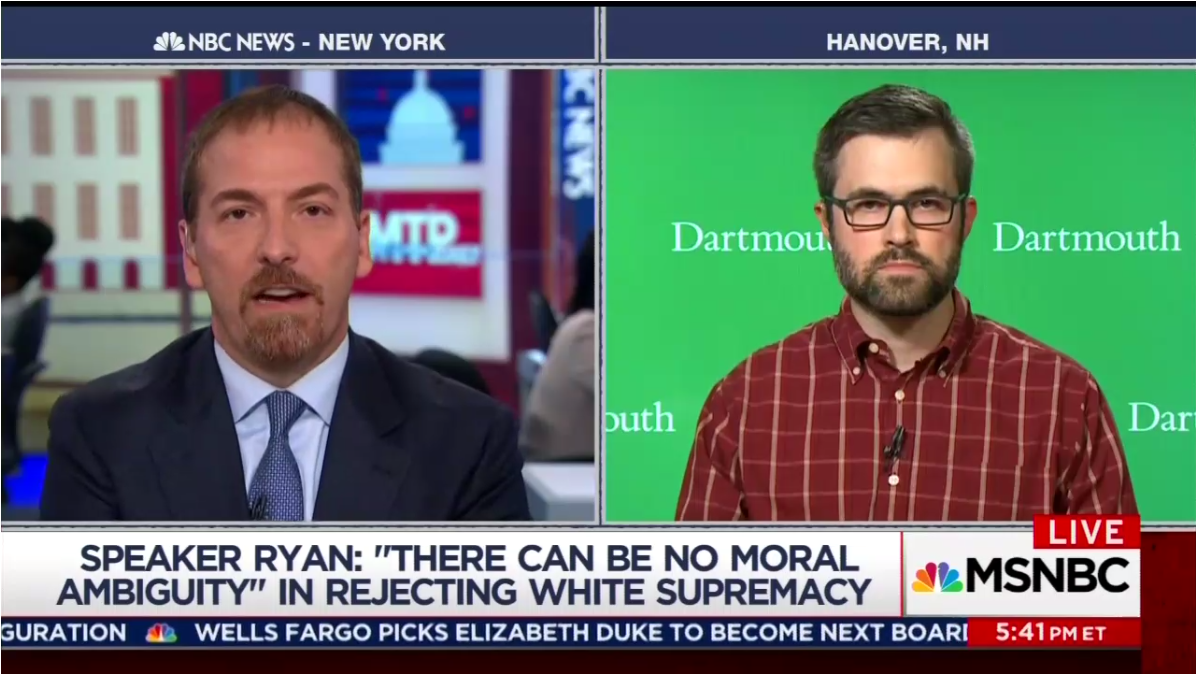 It was two weeks ago Wednesday when NBC News Moderator Chuck Todd first elevated the radical and violent left-wing group known as Antifa on MTP Daily following the violent clashes in Charlottesville. And since then, Antifa was reported to have thrown bottles of urine at Boston police, assaulted an older woman, and beaten peaceful Trump supporters in Berkeley. And despite the fact that Democratic leaders and liberal newspapers have been condemning the group Todd has remained silent.

In two separate appearances, first on MTP Daily and then on Meet the Press, Todd spoke with Dartmouth University Professor Mark Bray, an avid supporter on Antifa who had authored a book touting their leftist extremism.

During the first appearance, Bray was allowed to freely rewrite history to paint Antifa as a force for good and justice, with almost no push back or check on what he was asserting. Todd seemed so excited by Bray’s false claims about Antifa that he was making the arguments for them and was actually pushing back on the guest who was promoting freedom of speech.

There was also no mention from Todd of Antifa fanatical support for communism nor how their definition of “fascist” includes pretty much anyone to the right of Bernie Sanders.

A few days later on Meet the Press, Todd held a so-called “debate” between Bray and the same guest who was promoting free speech. And when describing Antifa, Todd downplayed their brutal violence, claiming they were “a far-left political movement that argues it's necessary to confront hate groups sometimes with force.” Again, there was little to no push back from Todd even when Bray suggested they were acting in self-defense.

Since appearing with Todd to promote violence, Bray has been disavowed by the Dartmouth University President for his support for the radical group. In an official statement made on August 21 (the day after his Meet the Press appearance), University President Philip Hanlon said:

Recent statements made by Lecturer in History Mark Bray supporting violent protest do not represent the views of Dartmouth. As an institution, we condemn anything but civil discourse in the exchange of opinions and ideas. Dartmouth embraces free speech and open inquiry in all matters, and all on our campus enjoy the freedom to speak, write, listen and debate in pursuit of better learning and understanding; however, the endorsement of violence in any form is contrary to Dartmouth values.

This denouncement of Bray by his employer was never mentioned by Todd on any of his shows.

“Our democracy has no room for inciting violence or endangering the public, no matter the ideology of those who commit such acts,” she said in a press release. “The violent actions of people calling themselves antifa in Berkeley this weekend deserve unequivocal condemnation, and the perpetrators should be arrested and prosecuted.”

Even the liberal LA Times admits that the Antifa brutality seen at Berkley had spurred “soul-searching within leftist activist community.”

So despite the bipartisan condemnation of Antifa, the petition to get the group labeled a terrorist organization (which is how the State of New Jersey sees them), and Dartmouth’s disavowal of Bray, NBC’s Chuck Todd still has not said anything about Antifa or his promotion of them.