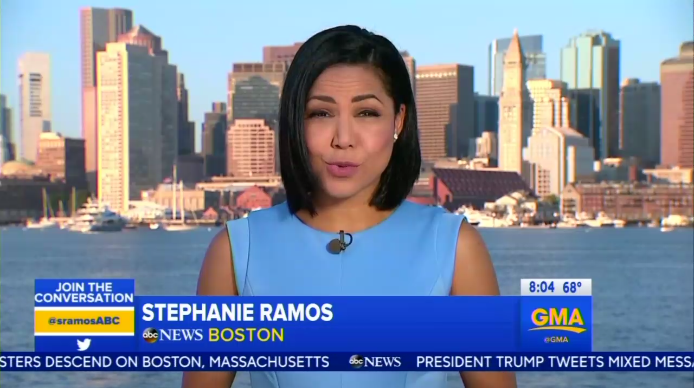 On Saturday, counter-protesters descended on Boston, Massachusetts to try and stop a gathering billed as a “free-speech rally,” which was attended by some white nationalists. It didn’t take long for the radical leftist element known as Antifa to bring the chaos as they violently assaulted innocent people and the police. But come Sunday, both ABC’s Good Morning America and NBC’s Sunday Today downplayed the violence Antifa brought with them.

During the introduction to ABC’s report on the Boston rally, reporter Stephanie Ramos touted the protesters claiming “people who showed up to counter protest were passionate, few were rowdy, but similar scenes played out across the country.”

When it came to reporting the facts of the violence by leftist extremists, Ramos’ report was sorely lacking. All she had to show of the violence was a clip of police dispatch asking they needed gas masks and briefly mentioning that 33 were arrested.

That’s despite the fact that the police commissioner told reporters that his officers were assaulted with bottles of urine, which were thrown at them.

But Ramos did manage to tout how counter protesters chased a man as they shouted: “run Nazi, run.” “This man chased out of the park, running toward police as crowds chant after him,” she claimed without ever verifying what his political beliefs actually were.

Anchor Willie Geist started off NBC’s Sunday Today by asserting that “there were some arrests, but were largely peaceful and a far cry from what we saw last weekend.” And despite the fact that six officers were injured in the violent clashes, reporter Morgan Radford callously described the protest as “really what you would call the calm after the storm.”

What they didn’t show a lot of was Antifa’s brutal clashes with the police. France24 White House Correspondent Philip Crowder tweeted out his footage of the radicals battling with the police. In his video, an agitator can be heard berating a black police officer saying: “You stupid ass black bitch! You're supposed to be on our side!”

There was no mention by any of the network news reporters of the older woman who was assaulted and dragged across the ground by an Antifa thug for waving an American flag. But Radford did claim the protests were a part of “a heated debate over the difference between free speech and hate speech.”

Again, there was no mention that the Supreme Court and the liberal ACLU have said that hate speech was protected as free speech under the Constitution of the United States.

The blind eye ABC and NBC have turned to Antifa comes after the State of New Jersey had formally added the group to their list of known terrorist organizations.

PAULA FARIS: But we’re going to start here, with a day protests across much of the country. One week after the deadly violence at the white nationalist rally in Charlottesville, Virginia.

DAN HARRIS: The largest gathering this weekend in Boston, where tens of thousands of counter protestors utterly overwhelmed what was billed as a free speech rally. Where at least one far right figure was expected to speak.

FARIS: Some incredible images. But there were clashes with police. Stephanie Ramos was right there. Good morning, Stephanie.

STEPHANIE RAMOS: Paula, Dan, good morning. The free speech rally demonstrators were totally outnumbered by counter protesters. But the police commissioner tells me his department was ready for this. People who showed up to counter protest were passionate, few were rowdy, but similar scenes played out across the country.

Across the country, tensions running high as protesters and police swarmed the streets.

UNIDENTIFIED POLICE OFFICER: Tonight's rally protest has concluded. At this time, you are being asked to leave.

RAMOS: In Dallas, people gathering against white supremacy. Police on the scene in riot gear and on horseback.

RAMOS: And in Boston, at least 40,000 people streaming through the streets. According to police. Trying to stop this free speech rally, out of concern that it would be a platform for white supremacists. Despite denials from the group's organizers. That rally featured at least one white supremacist speaker. But it ended quickly. And that's when things got heated.

RAMOS: This man chased out of the park, running toward police as crowds chant after him.

UNIDENTIFIED PROTESTER: I wanted to come out and confront them head on and I didn't want to miss this chance.

RAMOS: This, just a week after the death of Heather Heyer in Charlottesville when violent protests between white nationalist groups and counter protesters turned deadly. 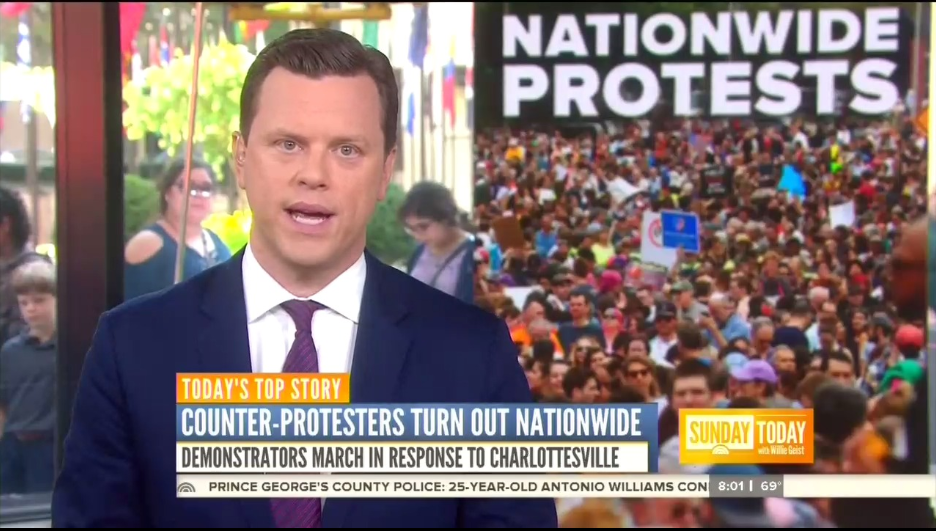 WILLIE GEIST: Let's begin this morning with the protest held on Saturday in cities across the country. There were some arrests, but were largely peaceful and a far cry from what we saw last weekend. Morgan Radford was in the middle of the biggest rally in Boston, on Saturday. Morgan, good morning.

MORGAN RADFORD: Willie, good morning. Protests erupting from coast to coast. This is really what you would call the calm after the storm. The largest protest was here in Boston where more than 40,000 people took to the streets, far more than authorities expected.

Protests breaking out across the country. Police fending off protesters in Boston. Skirmishes at a confederate rally in Hot Springs, Arkansas. A March for diversity in Venice, California. And solidarity marchers flooding the streets of Dallas. A heated debate over the difference between free speech and hate speech.

UNIDENTIFIED WOMAN: Resist. Resist. We've got to resist. We can't allow this stuff to come into the city of Boston.

RADFORD: In Boston about a hundred activists gathered under a small rotunda separated by police, affirming their right to express their views. Many distanced themes from the white supremacists and neo-Nazis who were part of last weekend's violent protest.

RADFORD: As they huddled, thousands of counter protesters surrounded them, telling them their views had no place in Boston.

RADFORD: Out of tens of thousands of protesters, over 30 were arrested and half a dozen police officers injured. The end of a rally marking the beginning of a tough conversation.

RADFORD: This morning the city is grappling with how to move forward. The mayor came out and thanked everyone who showed love and not hate. This, as four more rallies are expected throughout the country today.