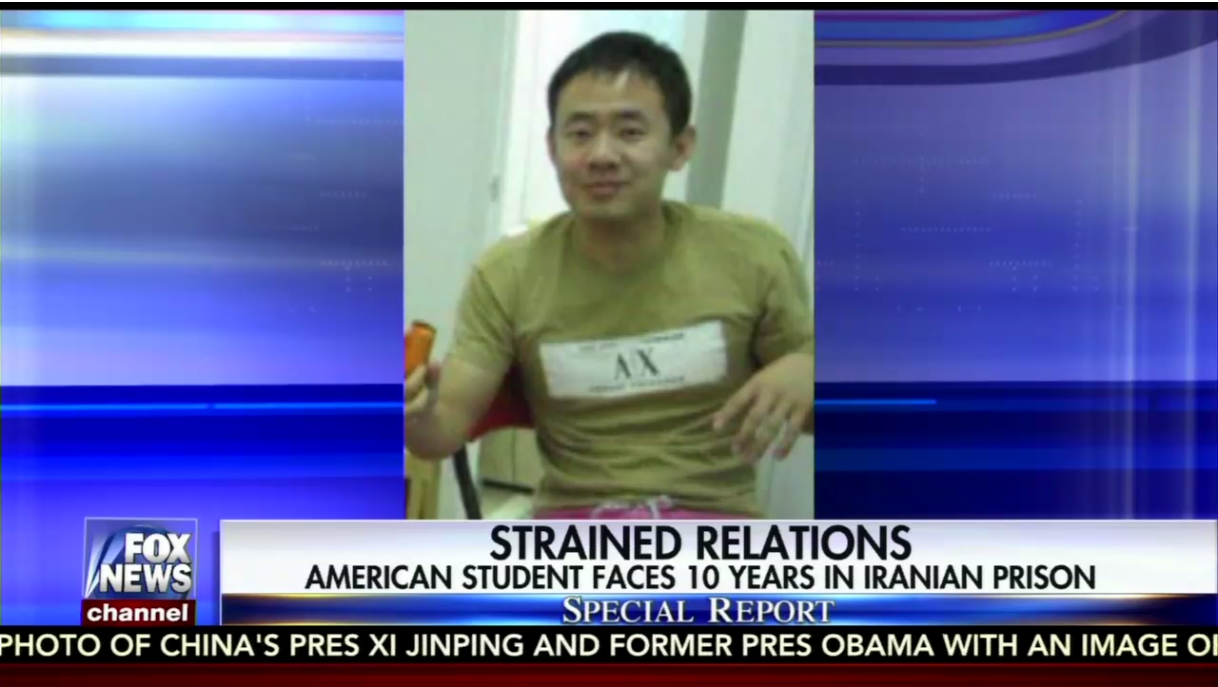 On Monday, Iranian government officials handed down their twisted form of justice by sentencing an American graduate student to ten years in prison for spying allegations. “That sentence comes on the day President Trump is supposed to decide on a key matter concerning the nuclear deal with the Islamic republic,” announced Anchor Bret Baier on Fox News Channel’s Special Report. The Big Three Networks (ABC, CBS, and NBC) completely ignored the story, but they went gaga for a dog and a baby deer.

In all, the Big Three Networks spent 107 seconds (ABC 62, CBS 23, and NBC 22 respectively) on a golden retriever named Storm rescuing a drowning fawn. While combined, they gave a whopping zero seconds to the American student destined to spend 10 years in an Iranian prison. ABC ran the deer story as a full report during its “America Strong” segment at the end of World News Tonight.

The student has been identified as Xiyue Wang, a 37-year-old Chinese-American who was arrested last summer. “Princeton University says, that student was in Iran conducting research for his Ph.D.,” reported Fox News Correspondent Rich Edson. “Iran says he assumed the role of a student so that he could infiltrate their archives and send sensitive information back to the west.”

The sentencing was arguably a taunt against the United States since it came on a day that the U.S. was supposed to announce an update on Iran’s compliance with the nuclear deal. “Congress requires the administration to certify every 90 days whether Iran is complying with that agreement. The latest deadline is today,” noted Edson. And as of the airing of Edson’s segment, the State Department had not issued its report on Iran.

And according to a report by CNN, the State Department was putting pressure on Iran:

A U.S. State Department official told CNN they "are aware of reports regarding" Wang. Citing privacy reasons, the official declined to go into detail about specific consular cases.

The State Department is calling for the immediate release of all citizens held unjustly in Iran, the official said.

The Big Three Networks have a long history of proving their sympathies the tyrannical rogue country. In late April of this year, the networks blacked out yet another incident of harassment by the Iranians against the U.S. Navy.

On CBS in May, the network imitated Iranian state TV and complained President Trump dashed the ‘hopes’ of moderates while pleasing their ‘hardliners’ with a speech on the Middle East. “The view from here is that Donald Trump came to Saudi Arabia mainly as a sales rep for American arms manufacturers,” sneered Elizabeth Palmer at the time.

NBC’s Andrea Mitchell, who has a real soft spot for dictatorial rulers, spent days lobbying the public to keep the Iran deal. “President Trump is instead focusing on Iran’s terror ties, which six world powers did not consider at the time because they thought it was more important to stop Iran from getting a bomb ... the new administration appears to be ready to rip up the deal,” she whined back in April.

What makes the lack of coverage of Wang’s sentencing even more outrageous is the fact that it came only a few weeks after the murder of another American student: Otto Warmbier. In a similar incident, Warmbier was arrested by the North Korean regime and brutalized in captivity. He sustained severe brain trauma, which eventually led to his death.

But by all means, please cover the dog and the deer.

BRET BAIER: We start with news that Iran has sentenced a Chinese-American graduate student in prison for spying. That graduate student from a top American university is looking at ten years in an Iranian prison tonight. That sentence comes on the day President Trump is supposed to decide on a key matter concerning the nuclear deal with the Islamic republic, a decision that could come at any minute. Correspondent Rich Edson is at the State Department tonight. Good evening, Rich.

RICH EDSON: Good evening Bret. And we expect that official decision shortly. This is as Princeton University says, that student was in Iran conducting research for his Ph.D. Iran says he assumed the role of a student so that he could infiltrate their archives and send sensitive information back to the west. Iran arrested the student, a 37-year-old graduate student last summer, Xiyue Wang. That’s according to the university.

It is this provocative behavior the U.S. says continues two years after the previous administration signed a nuclear deal with Iran and several other countries. Congress requires the administration to certify every 90 days whether Iran is complying with that agreement. The latest deadline is today. The State Department says the U.S. will continue complying with the nuclear agreement while he reviews the entire U.S. policy towards Iran.

President Trump opposes the Iran deal, though Iran has already received tens of billions of dollars in unfrozen assets as part of the agreement and restoring international sanctions against Iran could be difficult. White House says the State Department will release the decision today. State refuses to say when it will do so. It is also unclear when the Trump administration will conclude his full policy review of the Iran policy that the U.S. has.