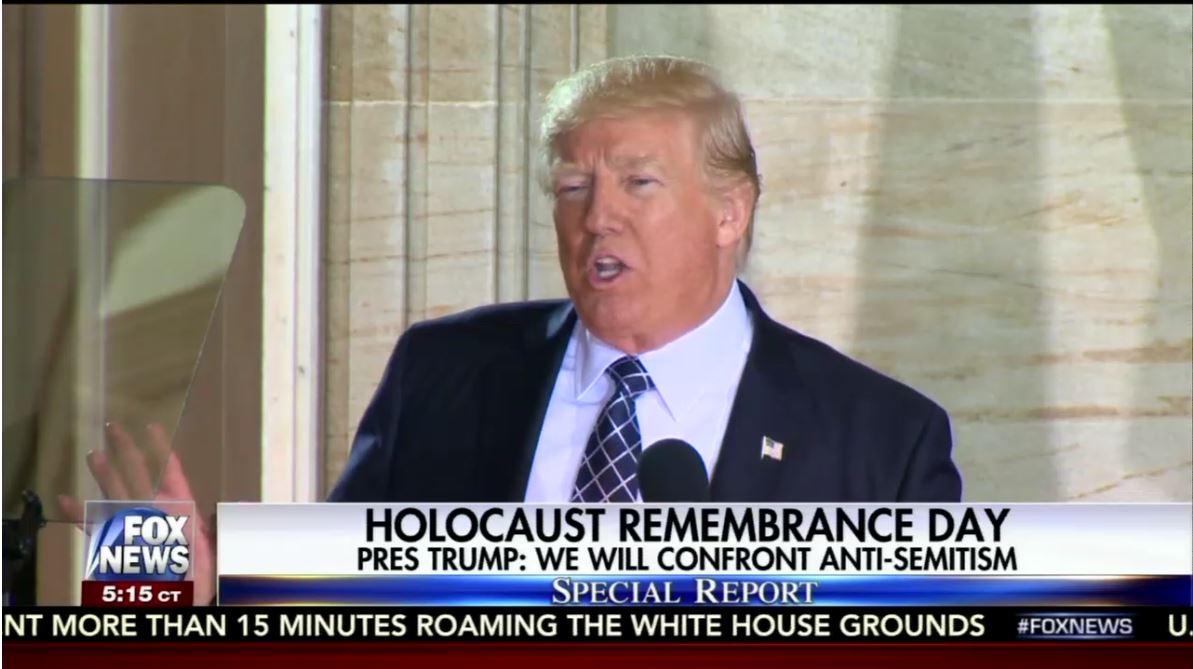 On Tuesday, President Donald Trump paid his respects for Holocaust Remembrance Day with a visit to the National Holocaust Museum just a few blocks away from the White House. There he denounced anti-Semitic attacks saying: “It has been on display in the most sinister manner when terrorists attack Jewish communities or when aggressors threaten Israel with total and complete destruction. This is my pledge to you: We will confront anti-Semitism.” Yet all of the Big Three networks (ABC, CBS, and NBC) omitted his remarks from their evening reports.

After scouring the networks’ websites using the keyword “holocaust,” I discovered that ABC News was the only network to have any reporter publish an article about the President’s visit.

“President Trump today vowed to crack down on anti-Semitism during a speech on Capitol Hill as part of the U.S. Holocaust Memorial Museum’s National Days of Remembrance,” wrote ABC’s Meghan Keneally. “He told the story of Holocaust survivor and political activist Elie Wiesel, who died last year, and slammed Holocaust deniers.”

But it’s easy to understand why they didn’t want to give his memorial speech any airtime. All three networks of have a long history of trying to tie the Trump administration to deep-seated anti-Semitism.

From this day forward, it’s going to be only America first … It carries with it overtones from the 1930s when an anti-Semitic movement saying, ‘We don't want to get involved in Europe's war. It's the Jews fault in Germany!

During the height of the bomb threats to Jewish Community Centers earlier this year, the networks tried to paint the Trump administration as the motivating factor. “Southern Poverty Law Center said that the number of anti-Muslim groups in the U.S. has tripled between 2015 and 2016 — during the time of the campaign,” CBS Correspondent Margaret Brennan told Press Secretary Sean Spicer during a briefing.

When it was discovered that the bomb threats were called in by a Jewish teen in Israel, the networks failed to apologize for asserting Trump created the anti-Semitic atmosphere here at home. And they reluctantly had to report on Vice President Mike Pence’s efforts to help clean up a Jewish cemetery desecrated by vandals.

NBC’s cable channel MSNBC routinely allows its guests to smear the Trump and members of his cabinet as “avowed anti-Semites” despite an utter lack of direct evidence. MSNBC also gave Trump’s address wall-to-wall coverage while he was speaking. It means that NBC had people there and still chose not to submit a report about it.

Both CBS and NBC have relied on the hyperbolic ramblings of the Steven Goldstein, the executive director of the Anne Frank Center for Mutual Respect in order to smear the administration as hateful to Jews. CBS actually hyped the center’s claims that Spicer was a “Holocaust denier” and should be fired after his Hitler blunder. But according to The Atlantic, the organization is a fraud.

“It may not have leaders with a scholarly background, a mass membership, or institutional standing among Jewish groups and Holocaust museums,” Emma Green wrote on April 24. “But because it talks a big game and wields the name of Anne Frank, the media has awarded it authority it never earned.”

This blackout of the President’s visit is the latest in a series of obvious attempts to make sure the Trump administration is as unappealing as possible. By reporting that Trump paid respects to victims of the Holocaust it flies right in the face of the narrative they’re trying to push.

BRET BAIER: Today, the President participated in a Capitol Hill ceremony marking Holocaust Remembrance Day. President Trump says people who deny that 6 million Jews were killed in the Holocaust are accomplices to horrible evil and purveyors of anti-Semitism.

DONALD TRUMP: It has been on display in the most sinister manner when terrorists attack Jewish communities or when aggressors threaten Israel with total and complete destruction. This is my pledge to you. We will confront anti-Semitism.

BAIER: The President promised to always stand by with the Jewish people and the state Israel.