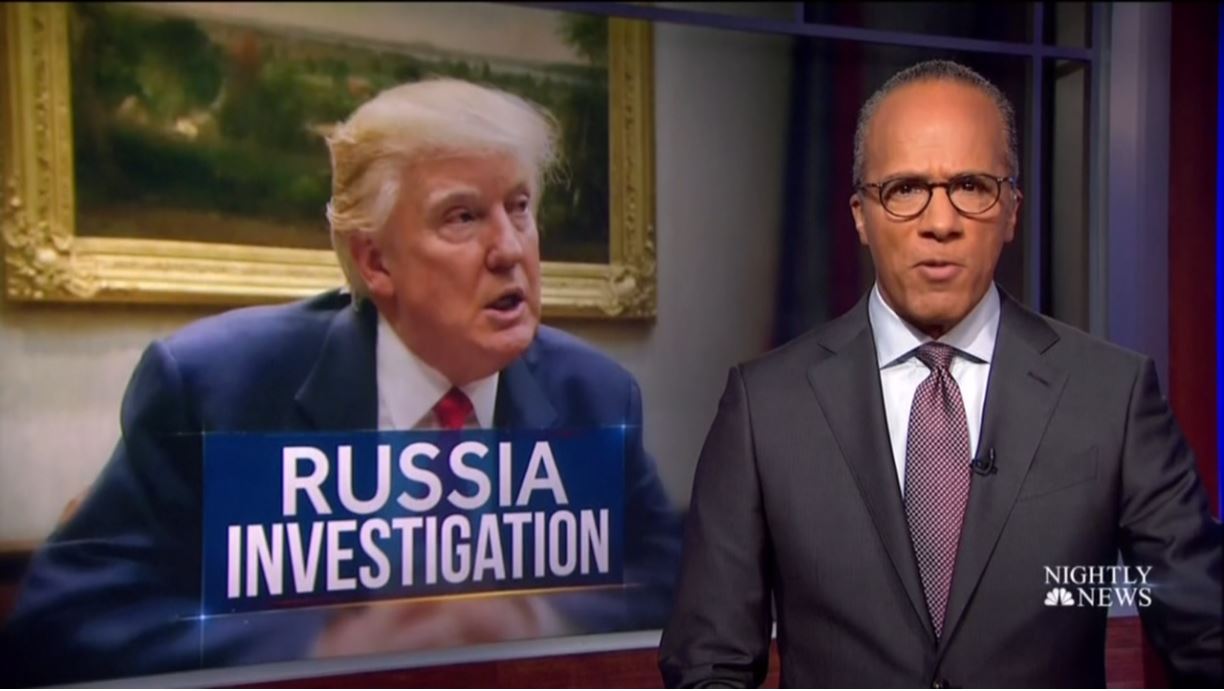 Both ABC and NBC were desperately backing calls from partisan Democrats, Monday night, to have a special prosecutor investigate the Donald Trump’s campaign for evidence of collusion with Russia. But, took a liking to a call from one particular Republican. “In Washington tonight, pressure is intensifying for an independent investigation on Russia, including a call from a leading Republican,” announced anchor Lester Holt during NBC Nightly News, “There's also new resistance to those calls by the White House.”

The Republican Holt referred to (and ABC praised as well) was Representative Darrell Issa of California. “But now a prominent House Republican is calling for an independent investigation saying Attorney General Jeff sessions shouldn't be involved because of the prominent role he played in the Trump campaign,” reported ABC’s Jon Karl on World News Tonight.

But their respect for Issa’s opinion is a new phenomenon for these two liberal news outlets. In the past, they wanted nothing to with his active investigations and probes when it was Barack Obama’s administration that was under the microscope.

In 2014, they ignored the findings of Issa’s House Oversight Committee when they exposed the fact that the Obama administration covered up the motivation behind the Benghazi attack that killed four Americans. NBC didn’t think much of his investigation into the IRS’s targeting of Tea Party organizations neither, while ABC completely ignored it for months. Nor did they like it when another one of Issa’s probe’s discovered an “idiotic” ATF policy that got a Border Patrol agent killed.

But that hypocrisy didn’t stop them from using him to discredit the Trump administration. “Tonight, mounting scrutiny over Russia after top Republican congressman Darrell Issa breaking ranks with the President, calling for a special prosecutor to look into potential ties between Trump campaign aides and Russian officials,” Kristen Welker declared. She also leaned on an interview her colleague Matt Lauer conducted with former President George W. Bush where he tried to get the former president to trash Trump.

“The White House insisted today there's nothing left to investigate even though key questions remain unanswered,” Karl warned in the middle of his report. But he never expressed what those questions were. He only insinuated that there were dark secrets as he played highlights of his sparring with Press Secretary Spicer from the press briefing earlier in the day.

He brushed off Spicer’s argument of “how many people have to say that there's nothing there before you realize there's nothing there?” He’s comeback was that the FBI and Congressional investigations were still going on. He never mentioned that leaks from the FBI investigation (which is how they know anything about it) have said that there has been no evidence found of Russia collusion with the campaign, and that media reports were overstating the facts.

LESTER HOLT: In Washington tonight, pressure is intensifying for an independent investigation on Russia, including a call from a leading Republican. There's also new resistance to those calls by the White House. And now former President George W. Bush, who has rarely spoken out on politics since leaving office, is weighing in exclusively with NBC News. Our White House correspondent Kristen Welker has details.

DARRELL ISSA: You're going to need to use the special prosecutor's statute and office.

WELKER: The president declining to directly weigh in today.

UNIDENTIFIED REPORTER: Do you support a special prosecutor on Russia?

WELKER: But as the press was hustled out, whispering he hasn't spoken to Russia in years.

WELKER: That contradicts Mr. Trump's own public statements. This 2014 speech one of many in which he's touted his ties to Russian President Vladimir Putin.

TRUMP: As an example I own the miss universe, I was in Moscow recently. And I spoke indirectly and directly with President Putin, who could not have been nicer. 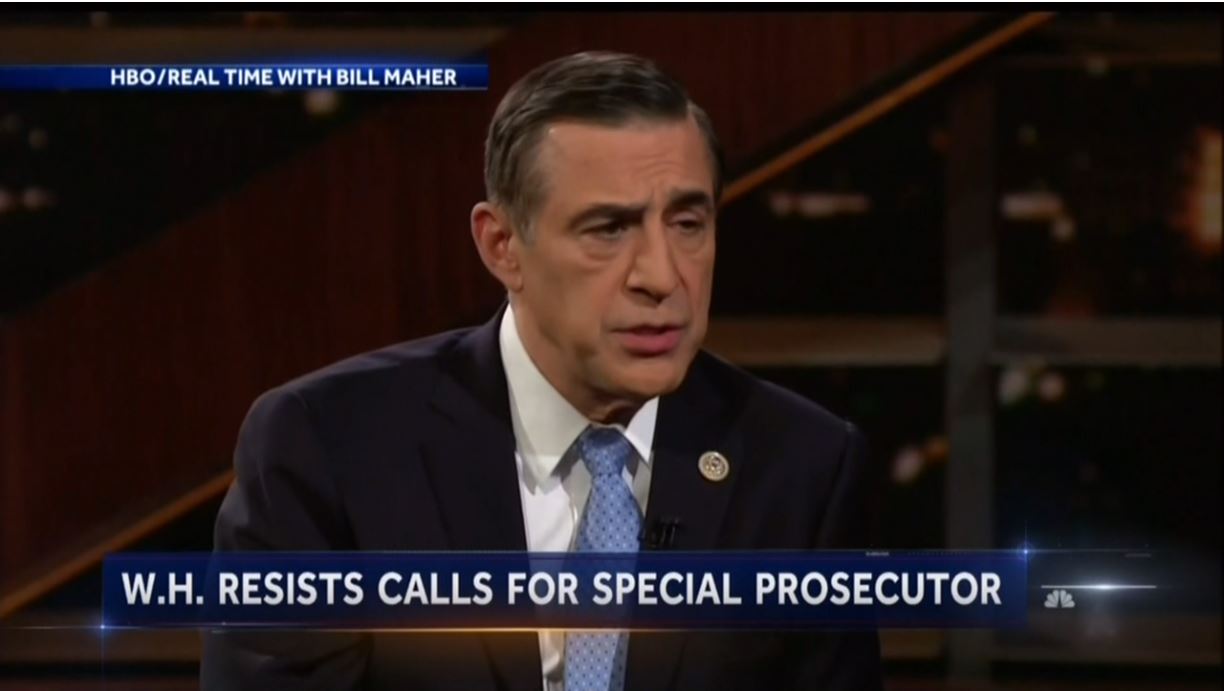 WELKER: But even former President George W. Bush insisted more information is needed in an exclusive interview with Matt Lauer on Today.

GEORGE W. BUSH: I think we all need answers. Whether or not a special prosecutor's the right way to go, you're talking to the wrong guy. I am sure, though, that that question needs to be answered.

WELKER: Today the White House tried to knock down the controversy.

SEAN SPICER: I guess my question would be, a prosecutor for what? We have for six months heard story after story come out about unnamed sources, say the same thing over and over again. And nothing's come of it.

WELKER: Tonight the fight is heating up on Capitol Hill.

DEVIN NUNES: We still have not seen any evidence of anyone from the Trump campaign or any other campaign, for that matter, that's communicated with the Russian government.

MICHAEL MCFAUL: I think the President himself would do well to get all the facts out. Nobody's talking about rerunning the election. But we do need to know what happened during the elections.

WELKER: Tonight Darrell Issa called an independent investigation critical for transparency. All looming as the President prepares to give his first joint address to congress tomorrow night. Lester?

HOLT: Kristen Welker at the White House, thank you.

DAVID MUIR: In the meantime, tonight, the White House is pushing back against the idea from Democrats, and at least one top Republican now, calling for a special prosecutor to investigate any possible ties between the president's campaign and Russia. ABC's chief White House correspondent, Jonathan Karl at the White House tonight.

SEAN SPICER: And I guess my question would be a special prosecutor for what?

SPICER: We have now for six months heard story after story come out about unnamed sources saying the same thing over and over again. And nothing's come of it.

KARL: But now a prominent House Republican is calling for an independent investigation saying Attorney General Jeff sessions shouldn't be involved because of the prominent role he played in the Trump campaign.

DARRELL ISSA: You cannot have somebody, a friend of mine, Jeff sessions who was on the campaign and who was an appointee. You're going to need to use the special prosecutor's statute in office.

KARL: The White House insisted today there's nothing left to investigate even though key questions remain unanswered. Do you now categorically deny there were no contacts between the Russians and anybody on the campaign? That's what the investigation would look at. 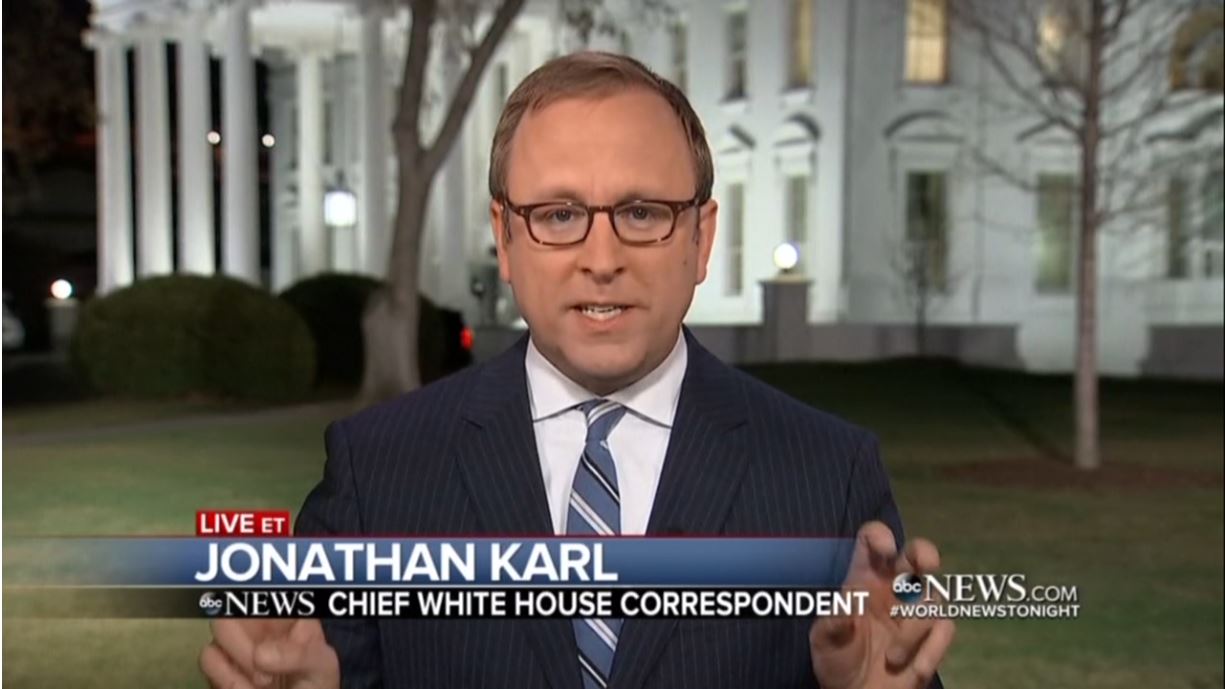 KARL: That's what the investigation would look at.

SPICER: Right, and I guess my point is -- is that you've had the intelligence community look at Russia's involvement in the election. You had the House and the Senate both do the same. And so, what I'm trying to ascertain is at what point -- how many people have to say that there's nothing there before you realize there's nothing there?

KARL: But the FBI is still investigating and the House and Senate intelligence committees have only just begun to investigate Russian interference in the campaign.

ADAM SCHIFF: We have, I think, reached in conclusion nor could we in terms issues of collusion because we haven't called in a single witness or reviewed a single document.

MUIR: All right. Let's get to Jon Karl live at the White House tonight. And Jon, you pressed Sean Spicer today on reports he called the head of the CIA, and asked him to publicly refute a news story that some of the president's campaign aides were in contact with the Russians. How did he respond?

KARL: He Sean did not directly deny or confirm that he made the call to the CIA director and connected him to reporters on that question. But he said there is nothing wrong, when I asked him directly about this. There is nothing wrong with connecting what he called “subject matter experts” with reporters to correct an inaccurate story.