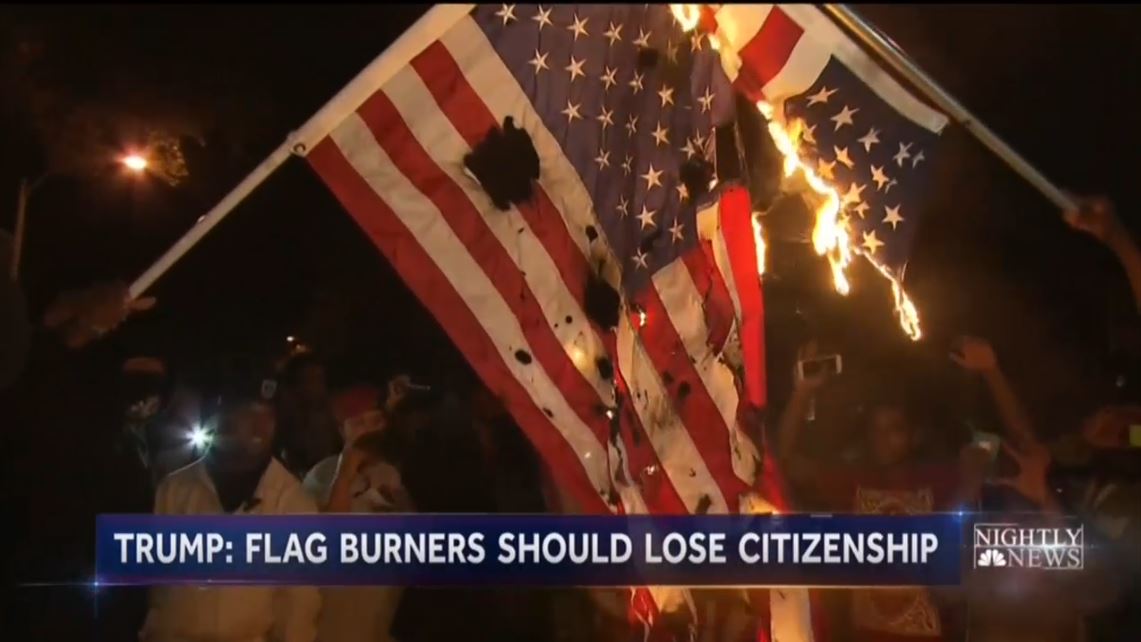 President-Elect Donald Trump apparently triggered the liberal media Tuesday morning with a tweet expressing his disapproval of people burning the American flag. He also argued that there should be a punishment for the act, but of course that would be unconstitutional. But while the Big Three networks (ABC, CBS, and NBC) hyped Trump’s position they downplayed, if not flat out ignored, Hillary Clinton’s own support for such a ban.

“The president-elect is overshadowing his own cabinet picks with his threat today about jailing or perhaps revoking citizenship for people who burn American flags in protest,” announced Anchor Lester Holt on NBC Nightly News leading into an over two minute long report on the tweet.

“Not long after this [Fox News] segment about a college protest in which an American flag was burned, a Trump tweet,” reported NBC’s Hallie Jackson, “But burning the flag is a form of free speech under the first amendment, upheld twice by the Supreme Court.”

She argued that most Americans disapprove of flag burning, saying, “In fact, before those court rulings, 48 of 50 states had laws banning it.” She also noted that a most unlikely Democratic presidential candidate supported such bans. “In 2005, Hillary Clinton backed a bill that would jail flag-burners,” she stated. But that is all she had to say about Clinton’s backing of the ban.

According to the Washington Examiner, not only did Clinton introduce legislation in 2005 to criminalize flag burning but she also backed another bill in 2006. Clinton’s bill would’ve had flag burners jailed for a year, just like what Trump called for. The Examiner also noted that, “Although one of the flag-burning measures Clinton supported failed in the Senate in June 2006, the bill earned 36 votes, mostly from Democrats in the minority.”

The fact that Clinton backed two flag burning bans went completely unreported by both ABC and CBS, which is noteworthy since NBC thought it was important enough to bring up. ABC's Tom Llamas instead chose to browbeat Trump, during World News Tonight, with the memory of conservative icon Justice Antonin Scalia, who defended flag burning as a form of freedom of speech.

CBS’s Major Garrett gave the tweet very little time, merely tacking it onto the end of his report about Trump’s latest cabinet picks. He mentioned that the punishing flag burners was unconstitutional, but failed to mention Clinton’s own history of supporting such punishments.

LESTER HOLT: But first, the president-elect is overshadowing his own cabinet picks with his threat today about jailing or perhaps revoking citizenship for people who burn American flags in protest. That, experts say, would be unconstitutional. We get details on this new firestorm from NBC's Hallie Jackson.

HALLIE JACKSON: The president-elect, today proposing punishment for a form of protest that's protected, though not popular.

FOX NEWS ANCHOR: One flag was set on fire. One was –

JACKSON: Not long after this segment about a college protest in which an American flag was burned, a Trump tweet. Quote, “Nobody should be allowed to burn the American flag. If they do, there must be consequences, perhaps loss of citizenship, or year in jail.” But burning the flag is a form of free speech under the first amendment, upheld twice by the Supreme Court.

MITCH MCCONNELL: In this country, we have a long tradition of respecting unpleasant speech. I happen to support the Supreme Court’s decision on that matter.

JACKSON: It's not that Americans like flag-burning. In fact, before those court rulings, 48 of 50 states had laws banning it. In 2005, Hillary Clinton backed a bill that would jail flag-burners. Still to some, more troubling than Trump's threat to imprison protesters who burn the flag, is his suggestion of stripping citizenship. That would also be unconstitutional.

PETE WILLIAMS: The Supreme Court has ruled that taking someone's citizenship away can't be used as a punishment. That citizenship isn't a license that expires when someone commits a crime.

JACKSON: Now even Newt Gingrich, a high profile Trump ally says he's got his own concerns about certain Trump tweets, like a recent one on voter fraud, pointing to the different weight of a president's words, versus a candidate's.

NEWT GINGRICH: Presidents of the United States can't randomly tweet without having somebody check it out.

JACKSON: The president-elect also on Twitter to promote what he's calling his thank you tour, kicking off Thursday in Cincinnati. He seemed to enjoy the energy of those campaign rallies as candidate. Now as president-elect, Lester, packing his bags to get back on the road.