The Tuesday evening following the first 2016 presidential debate, CBS Evening News was eager to share the opinions of people at debate watch parties from all across the country, including Los Angles, Philadelphia, and Dallas. Of the three watch parties they covered, CBS chose to lead with Los Angles where the makeup of the room was highly biased. “This group of Latino debate watchers gathered early,” reported CBS’s John Blackstone, “None here support Donald Trump, but Ana Reyes came looking for more reasons why Hillary Clinton deserved her vote.”

Reyes told Blackstone that she was hoping to hear more about Clinton’s plans for immigration reform. From there, the CBS reporter turned a rather surprising figure, “Pedro Trujillo is an undocumented immigrant who can't vote. His interest is in convincing others.” “I can knock on doors, call voters, remind them to go out and vote and to think of my family and think of me when they go out and cast their ballot in November,” Trujillo told Blackstone.

Blackstone noted that immigration was never brought up as a topic for discussion, neither by moderator Lester Holt nor the candidates themselves. But that didn’t stop Blackstone from showcasing the debate watchers’ disdain for Trump:

REYES: Donald Trump, again, you know, attacked the immigrants even though he didn't really say it, you know, too bluntly, as he usually does. But he, you know, still made a comment that the reason why a lot of, you know, crimes are still happening is because immigrants have guns.

TRUJILLO: Associating immigrants as gang members, right, like something horrible to say when he doesn't know the community.

CBS’s coverage from Philadelphia and Dallas was more balanced, with both Trump and Clinton supporter represented. They even highlighted a Trump supporter in Philly who poked fun and Clinton’s characterization of him. “I'm a deplorable, very deplorable. I'm a big Trump supporter,” John Sudzina joked with reporter Jericka Duncan.

SCOTT PELLEY: So, who won? Well, that's in the eye of the beholder. And today, we talked to voters in Pennsylvania, where Clinton has lost a substantial lead; and voters in California and Texas. We're going to start tonight with John Blackstone.

DONALD TRUMP: I’m saying is, we can stop them from leaving. 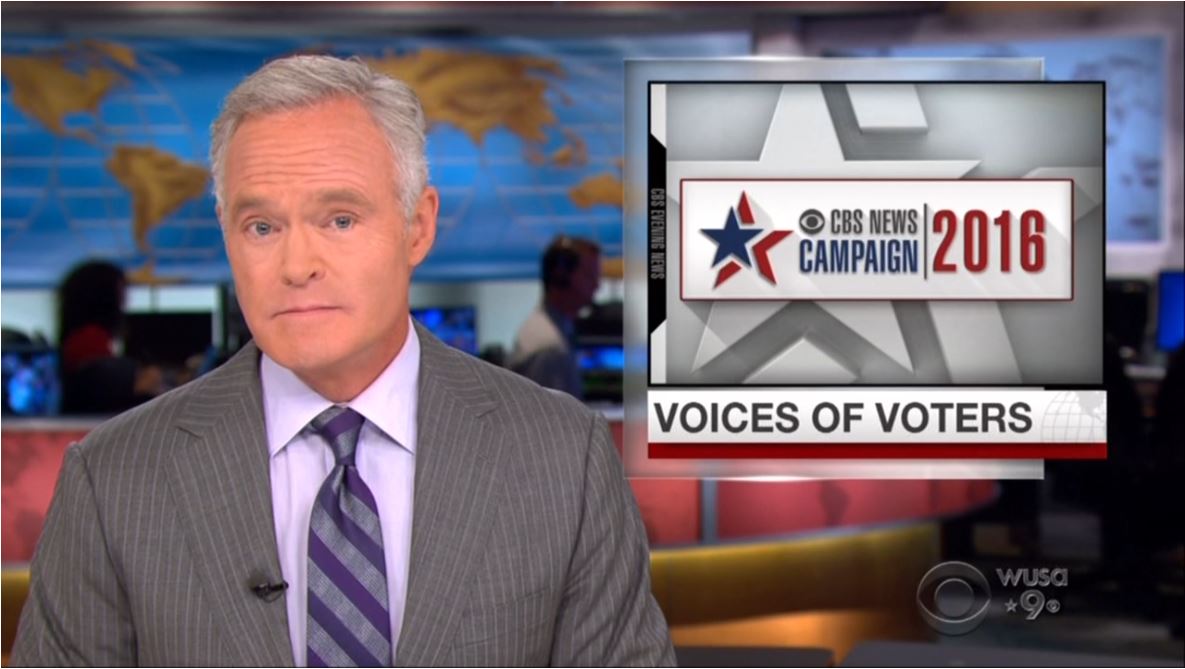 ANA REYES: I'm hoping to hear more of her promises that she's going to commit through with her, you know, 100 days immigration reform.

BLACKSTONE: Pedro Trujillo is an undocumented immigrant who can't vote. His interest is in convincing others.

PEDRO TRUJILLO: I can knock on doors, call voters, remind them to go out and vote and to think of my family and think of me when they go out and cast their ballot in November.

BLACKSTONE: During the debate, immigration reform did not come up, but economic growth, prison reform, law and order, were all issues that resonated. And then, there was Trump's portrayal of inner-city life.

TRUMP: Our inner cities, African Americans, Hispanics, are living in hell. Because it's so dangerous. You walk down the street. You get shot. We have gangs roaming the street, and in many cases, they're illegally here, illegal immigrants, and they have guns, and they shoot people.

REYES: Donald Trump, again, you know, attacked the immigrants even though he didn't really say it, you know, too bluntly, as he usually does. But he, you know, still made a comment that the reason why a lot of, you know, crimes are still happening is because immigrants have guns.

TRUJILLO: Associating immigrants as gang members, right, like something horrible to say when he doesn't know the community.

BLACKSTONE: Martha Barios took notes throughout the debate, disappointed that immigration was never discussed. Is there anything from this debate you can go out and tell people, "Here's why you should vote?"

MARTHA BARIOS: Yeah, because if we go back in time or what he-- you know, Donald Trump has said about, you know, different issues. Even though they didn't talk about that, I would tell them just remember what he was saying months ago. That's what I would tell them to, you know, think about twice.

UNIDENTIFIED VOICE: How many of you this is your first debate watch party?

DUNCAN: John Sudzina found himself at home last night in a sea of Trump supporters at this watch party.

SUDZINA: I feel like our economy's a mess. I think he's the only candidate who’s really talked about these things in a manner that appeals to me.

DUNCAN: But sprinkled amongst the GOP supporters, we found die-hard Democrat Jean Kendrick.

Is there any way this debate could sway you in a different direction?

JEAN KENDRICK: No. Hillary is awesome.

HEATHER CAPUANO: I'm definitely on the fence. I have to see-- because I like a little bit of everything. I'm hoping this debate will, like, answer all the questions I have.

DUNCAN: 90 minutes later, some answers, and a different outlook.

SUDZINA: Trump did not look crazy or like a madman. I think Hillary got some good licks on him. So that's why I would maybe call it a draw.

CAPUANO: He had no facts. There was no plans, no facts, no plans. And Hillary delivered, and that's someone that, you know, would get my vote.

VILLAFRANCA: After the first debate, undecided voter Chaib Salih still hasn't made up his mind. Did you hear what you wanted to hear?

CHAIB SALIH: Yes, it was good to see them from both side to side. You know, Mr. Trump spent more time on trying to defend himself. But Hillary Clinton was very clear on certain policies that I was interested in.

SUZANNE TUCKEY: I was really listening to each of them, and, you know, Hillary was definitely speaking from more substance, and I would listen to what she said and then what he said. It was the same several points over and over and over from him, and a lot of the attacks on her. So he's very good at that. That's what he's the best at doing.

VILLAFRANCA: Benji Gershon is a conservative and overall, liked Trump's performance at the debate.

BENJI GERSHON: There were a few times where she got under his skin, I could tell, but ultimately, I think that, you know, if you're a Trump supporter you’re going to stick with Trump, and if you're a Hillary supporter you're sticking with Hillary. I don’t think a lot came out of this debate as far as switching people's minds.

PELLEY: John, Jericka, and Omar with voters from across the country.