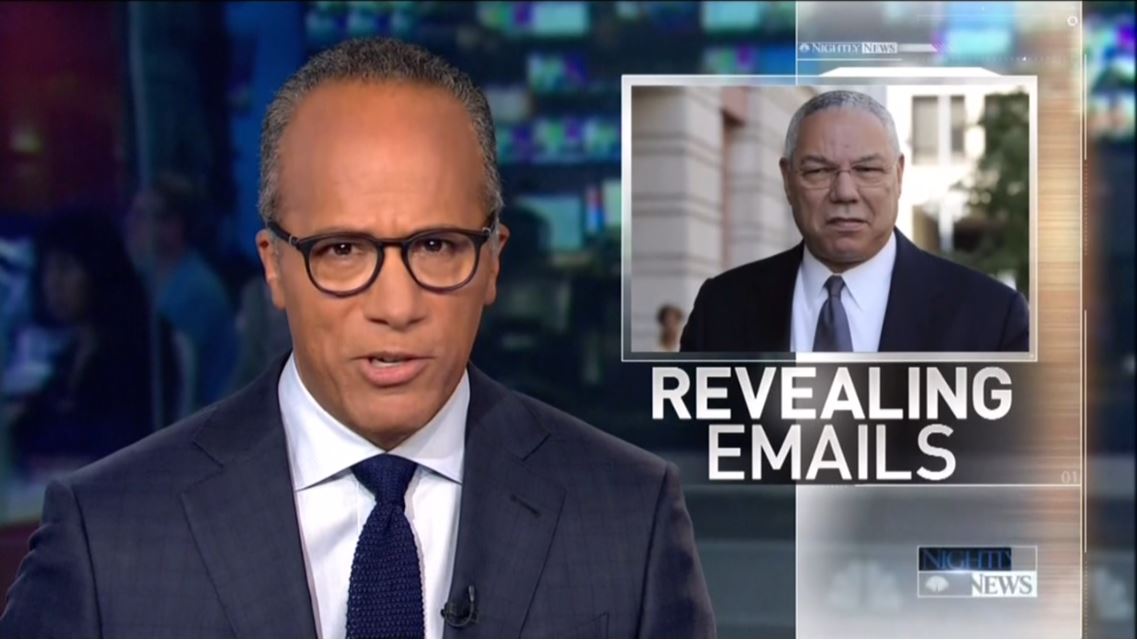 Just as they did Wednesday morning, the liberal “Big Three” networks steered clear of any of the more deeply personal attack against the Clintons in former Secretary of State Colin Powell’s e-mails, while continuing to rail against Donald Trump that evening. “Calling Donald Trump in e-mail, quote, “a national disgrace,” and Trump's birther movement, quote, “racist,”” announced a critical David Muir on ABC’s World News Tonight, while playing down attacks on Clinton. ABC, CBS, and NBC all ignored how Powell accused former President Bill Clinton of “dicking bimbos at home.”

“He is one of the most famous faces in the GOP, serving under three Republican presidents, but in his hacked e-mails, Colin Powell calls his own party's nominee "A national disgrace" and an "International pariah,"” ABC’s Cecilia Vega began her report. She went on to hype Powell’s criticism of the Congressional investigation into Benghazi as “a stupid witch hunt.”

Vega did read from the e-mail where Powell attacked Bill Clinton, but omitted the critical details of his sexual exploits. “But in 2014, he wrote, "I would rather not have to vote for her, although she is a friend I respect,"” Vega read, “He says Clinton has "Unbridled ambition" and calls her "Greedy, not transformational."”

The content of that e-mail from Powell reads as such: “I would rather not have to vote for her, although she is a friend I respect. A 70-year person with a long track record, unbridled ambition, greedy, not transformational, with a husband still dicking bimbos at home (according to the NYP).”

Reporter Pete Williams, on NBC Nightly News, gave little time to Powell’s thoughts on the candidates and focused mostly on hacking attacks at-large in the 2016 election. But he did report about how Powell believed the birther issue was racist, and Powell’s thoughts on Clinton’s e-mail woes. The only critical thing Williams reported Powell said in regards to Clinton was, “Referring to her speaking fees, Powell calls her, “the gift that keeps taking.””

It was the same on the Spanish-language networks Wednesday evening. Telemundo quoted Powell calling Trump a “national disgrace.” They only mentioned Powell criticized Clinton, but didn’t quote anything. On Univision, they mentioned how Powell is upset with the Clinton campaign over her e-mail scandal, but touted an e-mail where Powell hammered Trump, saying, “He said that Trump's wish of attracting the black vote is a "schizophrenic fantasy."”

DAVID MUIR: And to the other major development this evening, former Secretary of State Colin Powell, hacked. Calling Donald Trump in e-mail, quote, “a national disgrace,” and Trump's birther movement, quote, “racist.” But he also expressed his displeasure with the Clinton campaign, and ABC's Cecilia Vega on what the e-mails reveal.

CECILIA VEGA: He is one of the most famous faces in the GOP, serving under three Republican presidents, but in his hacked e-mails, Colin Powell calls his own party's nominee "A national disgrace" and an "International pariah." The former secretary of state also said Donald Trump has no sense of shame. Powell's e-mails were hacked in what could be Russia's latest attempt to influence this election. In those e-mails, he does not hold back, saying Trump "Appeals to the worst angels of the GOP nature and poor white folks." And about Trump's birther crusade against president Obama? 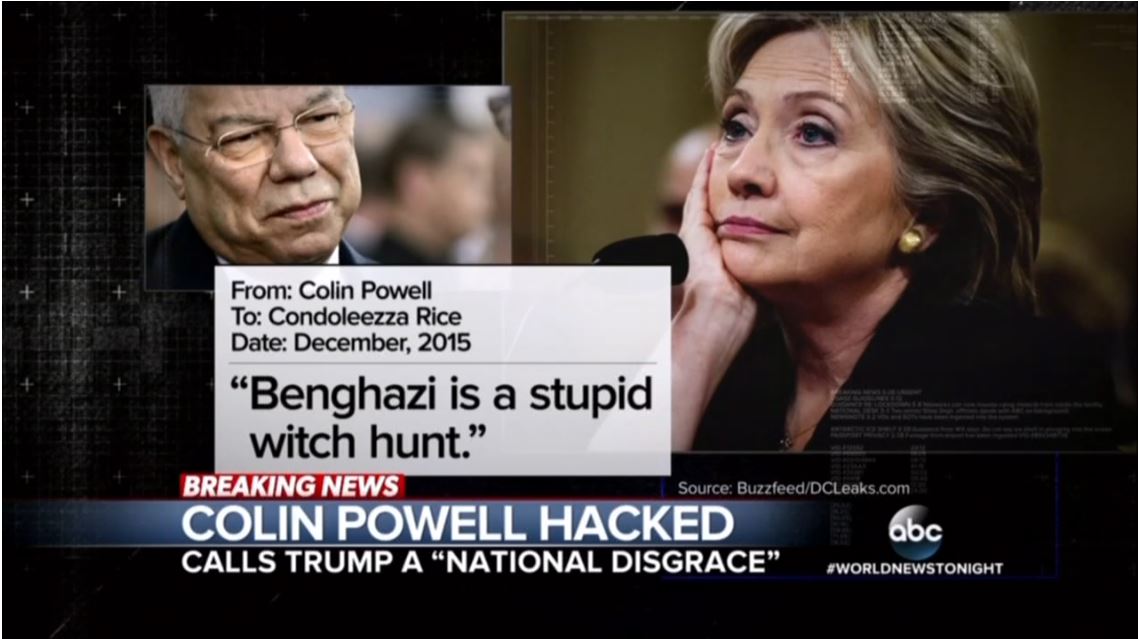 DONALD TRUMP: If he wasn't born in this country, which is a real possibility, then he has pulled one of the great cons in the history of politics.

VEGA: Powell writing, "Yup, the whole birther movement was racist." Powell also seems to defend Hillary Clinton in an e-mail to former secretary of state Condoleezza Rice, saying "Benghazi is a stupid witch hunt." But the niceties end there. Powell told a democratic donor that Clinton "doesn't look good. She is working herself to death." And just last month, Powell seemed frustrated after Clinton publicly suggested he was the reason she decided to use private e-mail as secretary of state. Writing that Clinton, quote, "Could have killed this two years ago by merely telling everyone honestly what she had done and not tie me into it. I told her staff three times not to try that gambit." Powell has not said who he's endorsing in this race.

COLIN POWELL: In due course, I will, you know, express my opinion about this, but I want to wait a little longer.

VEGA: But in 2014, he wrote, "I would rather not have to vote for her, although she is a friend I respect." He says Clinton has "Unbridled ambition" and calls her "Greedy, not transformational."

MUIR: So, let's get right to Cecilia Vega, live tonight as well. And Cecilia, any response from either campaign tonight after Secretary Powell's e-mails were revealed?

VEGA: Well, perhaps not surprising, David, no comment from either said. The Clinton campaign certainly wants to shift the focus, why she is still here, tonight, recovering Chappaqua at her home. She's back out on the campaign trail tomorrow. She's got two stops, North Carolina and Washington

SCOTT PELLEY: Former Secretary of State Colin Powell took a healthy swing at both candidates in e-mails that were stolen and posted by a web site called can DC Leaks. We don't know who hacked Powell's Gmail account, but here, again, is Nancy Cordes.

NANCY CORDES: “They are making a mistake trying to drag me in.” That was one of several e-mails Powell wrote expressing frustration with Clinton for likening her e-mail use to his.

HILLARY CLINTON: My predecessors did the same thing.

CORDES: He told a friend last month, "I told her staff three times not to try that gambit." Adding, "Sad thing is that Clinton could have killed this two years ago by merely telling everyone honestly what she had done." Powell's hacked e-mails reveal a complicated relationship with Clinton. On one hand he called her "A friend I respect." On the other he said, "Everything Clinton touches she kind of screws up with hubris." 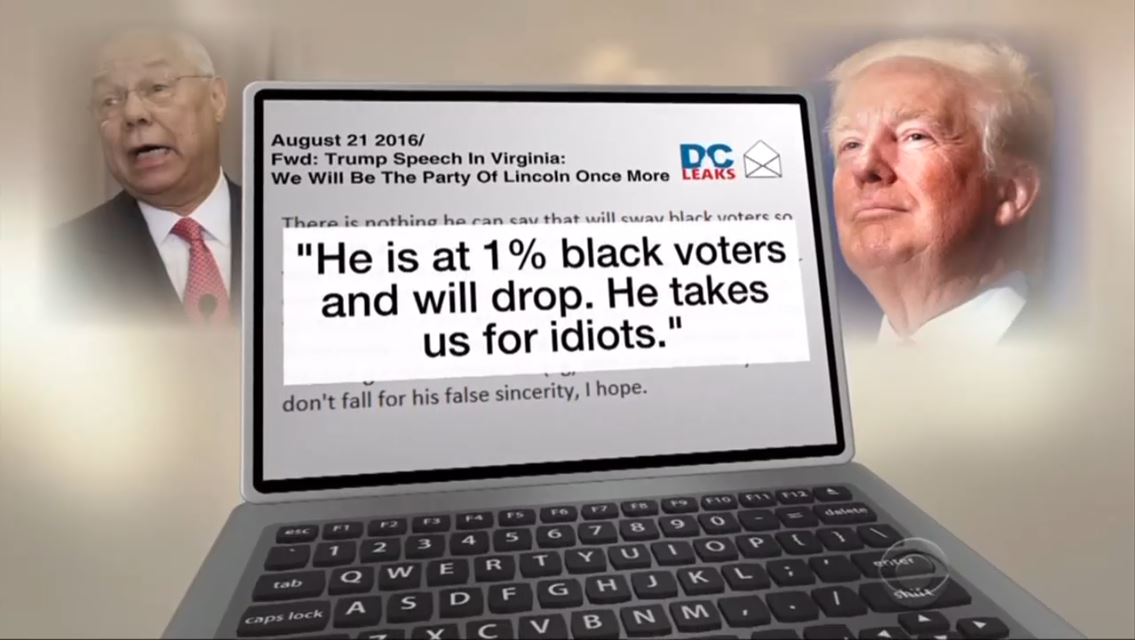 His comments about Donald Trump were even more scathing. "Trump is a national disgrace and an international pariah," he wrote in June. And last month, he said Trump "Is at one percent with black voters and will drop. He takes us for idiots. He can never overcome what he did to Obama with the search for the birth certificate."

A Powell aide confirmed today that Powell did write those e-mails, but beyond that, had no comment. Notably, Scott, neither did trump or Clinton.

LESTER HOLT: A website with suspected ties to Russia has released private emails from Colin Powell that strongly criticized both candidates for president and there could be more. Democratic officials are warning of possible cyberattacks at the state level. We get more on this tonight from our justice correspondent, Pete Williams.

PETE WILLIAMS: In newly leaked private emails that Colin Powell confirms are real, he calls Donald Trump quote, “a national disgrace and an international pariah.” As for Trump's questions about President Obama's birthplace, Powell says, “The whole birther movement was racist, that's what the 99 percent believe.”

Writing about Hillary Clinton, saying his advice was part of the reason she used a private email server. Powell says, “Her minions are making a mistake trying to drag me in.” And referring to her speaking fees, Powell calls her, “the gift that keeps taking.” 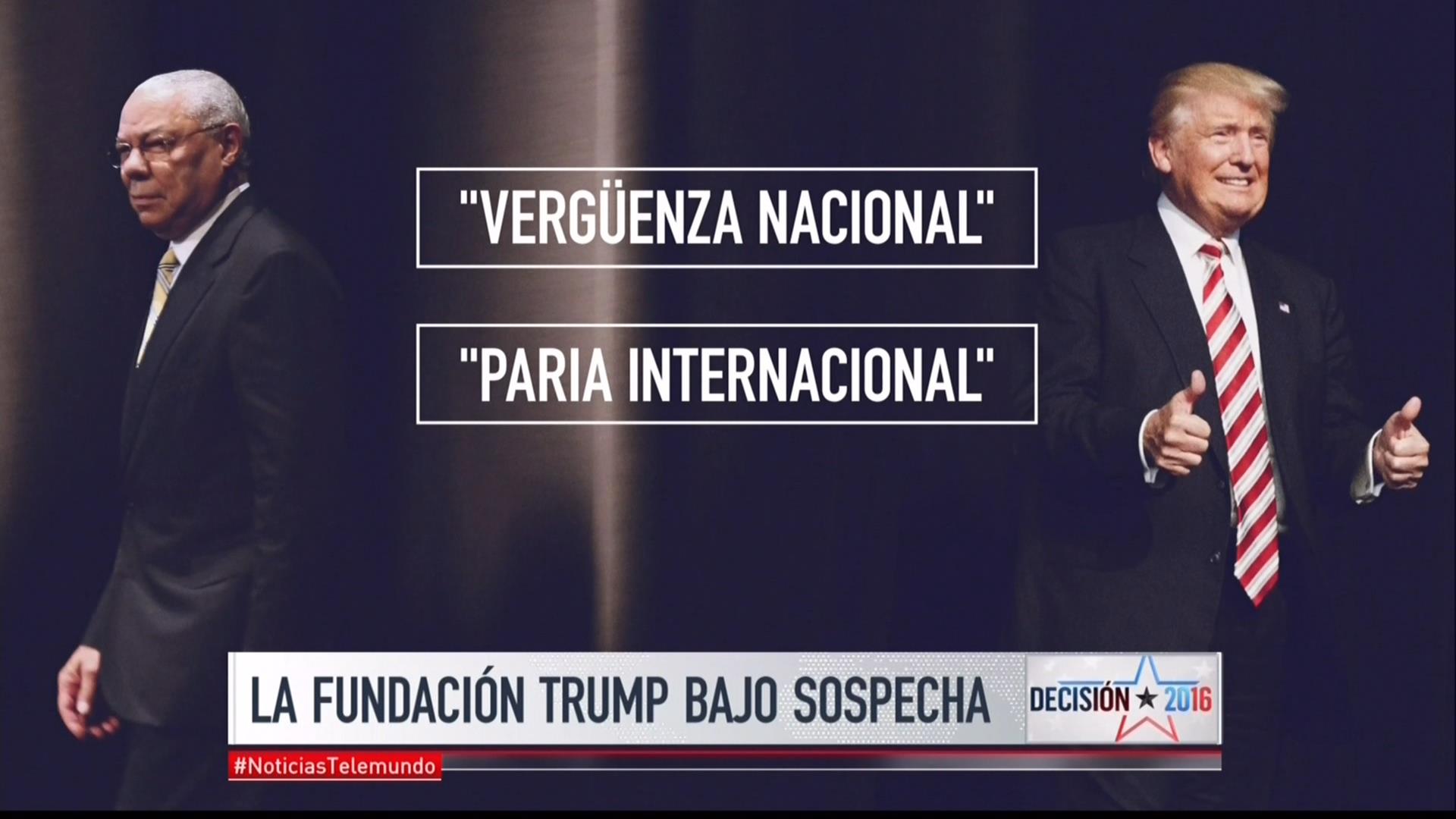 ANGIE SANDOVAL, CORRESPONDENT, TELEMUNDO: Today blows also came from his [Trump's] own party. Private correspondence reveals that retired colonel Colin Powell called Trump a "national embarrassment" and an "international pariah", that is to say, an outcast.

HELEN AGUIRRE-FERRÉ, DIRECTOR OF HISPANIC COMMUNICATIONS, RNC: I don't think it's surprising that he [Powell] is not supporting the Republican candidate in this instance, but he also said pretty negative things about Hillary Clinton.

MARIA ELENA SALINAS, ANCHOR, UNIVISION: "National disgrace" and "international pariah", that is what ex-Secretary of State Colin Powell called Donald Trump in leaked e-mails. In them, he also uses harsh words about the Hillary Clinton campaign. Lourdes Meluzá tells us about how Colin Powell today became the protagonist of the presidential campaign.

LOURDES MELUZÁ, CORRESPONDENT, UNIVISION: According to stolen personal e-mails that were leaked, ex-Secretary of State Colin Powell complained that the "Clinton mafia" was trying to involve him in the Democrat candidate's private e-mails scandal. "Everything that HRC touches she loses with her arrogance", he said referring to Clinton. He also lashes out harshly at Donald Trump, saying to an ex-assistant that Trump is "a national embarrassment and an international pariah", "he appeals to the GOP's worst angels and poor white people". He said that Trump's wish of attracting the black vote is a "schizophrenic fantasy". Before assuming her post as Secretary of State, Clinton consulted with Powell about how to use private e-mails. 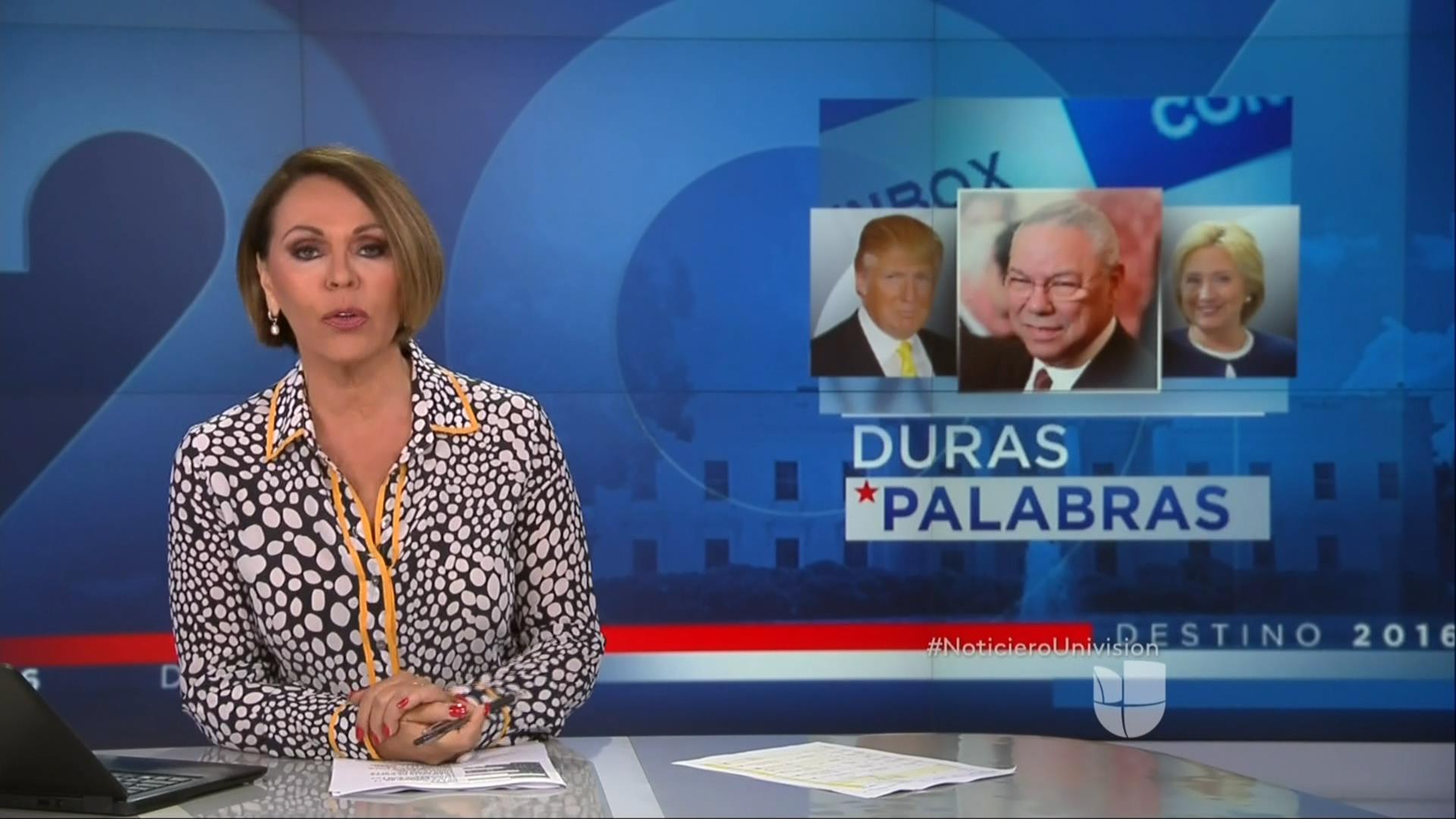 REP. XAVIER BECERRA (D-CA): For me, what Secretary Powell says, what other say, it doesn't matter anymore. The important last word came from the FBI, who investigated this.

LOURDES MELUZÁ, CORRESPONDENT, UNIVISION: Powell did not confirm its truthfulness, but an assistant did. Powell made his career with Republican presidents, but he supported Barack Obama, he says.

SERGIO DE LA PEÑA, RETIRED COLONEL, REPUBLICAN: Ungrateful of the support he got from the Republican Party, now he's surprised that Democrats are using as someone they can throw under the bus.

LOURDES MELUZÁ, CORRESPONDENT, UNIVISION: Some 30,000 of Powell's emails were intercepted and sent to DCLeaks.com. Experts believe that Russian intelligence sources are intervening and leaking these e-mails with the goal of intervening in the electoral process of the United States, and they don't doubt that they [Russians] will try to sabotage the election. In Washington, Lourdes Meluzá, Univision.