In a rather surprising move, both ABC’s World News Tonight and NBC’s Nightly News reported on Hillary and Bill Clinton’s astronomical speaking fees Wednesday. Unfortunately, both dedicated less than 20 seconds to the topic during each of their respective reports.  “A total of almost $1.5 million in just three months,” reported NBC’s Andrea Mitchell, a known Clinton fan.

“New financial records show Clinton raking in nearly $1.5 million for six speeches last year,” reported ABC’s Cecilia Vega, “Her husband, Bill? 22 speeches for over $5 million.” According to Mitchell’s report, Clinton was making that $1.5 million in the weeks prior to her announcing she would be running for president.

In both of their reports, the Clinton revelation was a mere blurb during their much longer segments about the state of the Democratic race for president. Before either one of the reporters reached this troubling news about Clinton, they spent a significant about of time railing against Bernie Sanders and his supporters for dividing the party.

“Defiance from [Sanders’] supporters now has some Democratic Party leaders worried it's their convention that could take a violent turn,” stated Vega, stoking Democratic fears of a party in chaos because of Bernie. “It's the growing split among Democrats that's raising big questions about how they'll ever unite to defeat Donald Trump,” fretted Mitchell.

Even though Clinton is willing to release how much money she has made from speaking engagements, she has yet to release the transcripts from any of them.

DAVID MUIR: And next to the Democrats here. The Clinton camp well aware of that new national poll tonight. Trump and Clinton trading places amid a Democratic Party fighting each other. Hillary Clinton, declaring victory in Kentucky overnight. Though ABC news is not calling it, too close. Sanders winning Oregon. Essentially sharing delegates, which means the math is nearly impossible for him, but he's vowing to fight until the end. As Trump begins his fight against Clinton already. Here's ABC’s Cecilia Vega. 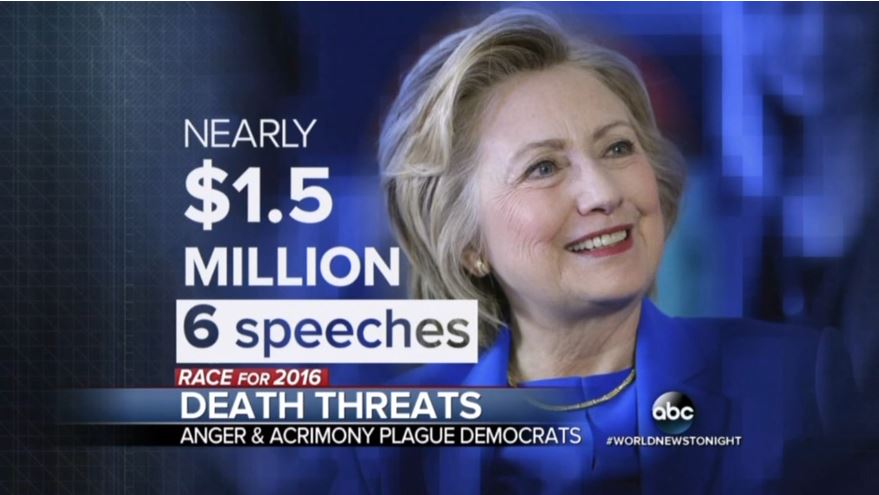 CECILIA VEGA: These images of angry Bernie Sanders supporters fighting over delegates, in Nevada, tonight coming to represent a nasty feud shaking up the Democratic Party. It got so bad, the state party chair received death threats. Sanders, denouncing the violence.

VOICEMAIL: You should be hung in the middle of town till dead, you are a disgrace to the American people.

VEGA: Sanders denouncing the violence, but after another hard-fought primary night, he's still vowing to stay in the race.

BERNIE SANDERS: We are in until the last ballot is cast. We have the possibility of going to Philadelphia with a majority of the pledged delegates.

VEGA: But the reality is, that's nearly impossible. To take the lead among pledged delegate, Sanders needs to win 67 percent of those still up for grabs. And that defiance from his supporters now has some Democratic Party leaders worried it's their convention that could take a violent turn.

DIANNE FEINSTEIN: It worries me a great deal. I don't want to go back to the '68 convention. Because I worry about what it does to the electorate as a whole, and he should, too.

VEGA: As this plays out, Hillary Clinton in the spotlight once again for those controversial speaking fees. New financial records show Clinton raking in nearly $1.5 million for six speeches last year. Her husband, Bill? 22 speeches for over $5 million.

MUIR: And Cecilia Vega joins us as well tonight. Cecilia, as much as Hillary Clinton wants to put the primary behind her, there's now talk of another democratic debate?

VEGA: There is David, and it would be the final debate. It would take place before California’s primary in June. Bernie Sanders says he welcomes it. No comment so for from Hillary Clinton. But, David. Tonight, Democratic Party leaders tell us they're skeptical this debate will ever happen.

LESTER HOLT: As Trump makes moves to unite his party as the presumptive nominee, the Democratic Party is fraying at the seams. In a new national poll, shows Trump leading Hillary Clinton by three points. Clinton will almost certainly be the nominee to face Trump, but Bernie Sanders keeps racking up wins, and ratcheting up the rhetoric as he accuses the party of treating him unfairly NBC's Andrea Mitchell on the Democrats' civil war.

ANDREA MITCHELL: In California, Bernie Sanders continuing his revolution against the Democratic Party and its leaders.

BERNIE SANDERS: State after state, the people have stood up and helped defeat the establishment.

MITCHELL: This after Sanders' big win in Oregon, and Hillary Clinton's apparent razor-thin victory in Kentucky. A split decision in Tuesday night's primaries. But it's the growing split among Democrats that's raising big questions about how they'll ever unite to defeat Donald Trump.

SANDERS: A word to the leadership of the Democratic Party. Open the doors! Let the people in!

MITCHELL: Clinton supporters want Sanders to ratchet down his rhetoric.

CLAIRE MCCASKILL: Bernie has to focus on the issues that matter. And making sure that Donald Trump never sets foot in the oval office. 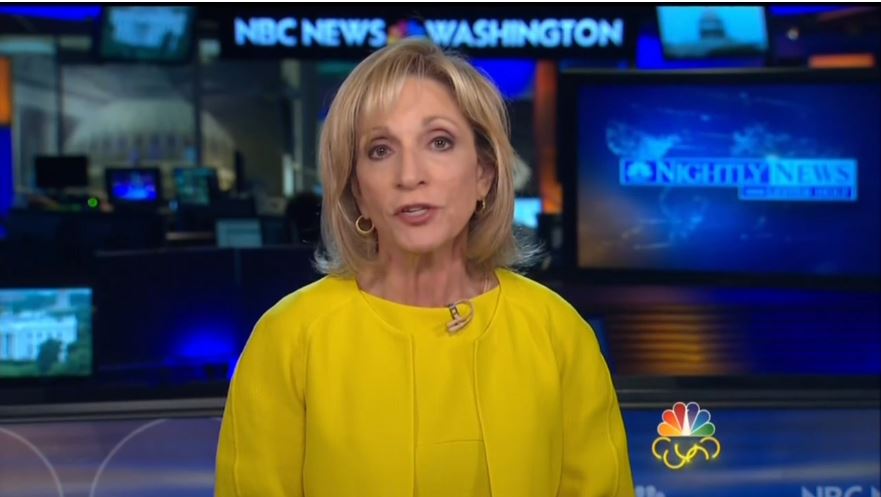 MITCHELL: Hoping he'll fall in line once the primaries are over as Clinton did in 2008. But tonight Sanders' campaign manager telling Chuck Todd they're fighting all the way to Philadelphia.

JEFF WEAVER: The Senator has been very clear that we're going to go through the process, and then he's going to the convention.

MITCHELL: But Vice president Biden downplaying talk of strains in the party.

JOE BIDEN: I'm confident that Bernie will be supportive if Hillary wins, which the numbers indicate will happen. And so I'm not worried. There's no fundamental split or anything in the Democratic Party.

MITCHELL: But Clinton revealed last night that only weeks before she announced she was running last year, she was still making speeches for hundreds of thousands of dollars. A total of almost $1.5 million in just three months. One reason she's having trouble winning over Sanders supporters. Lester.