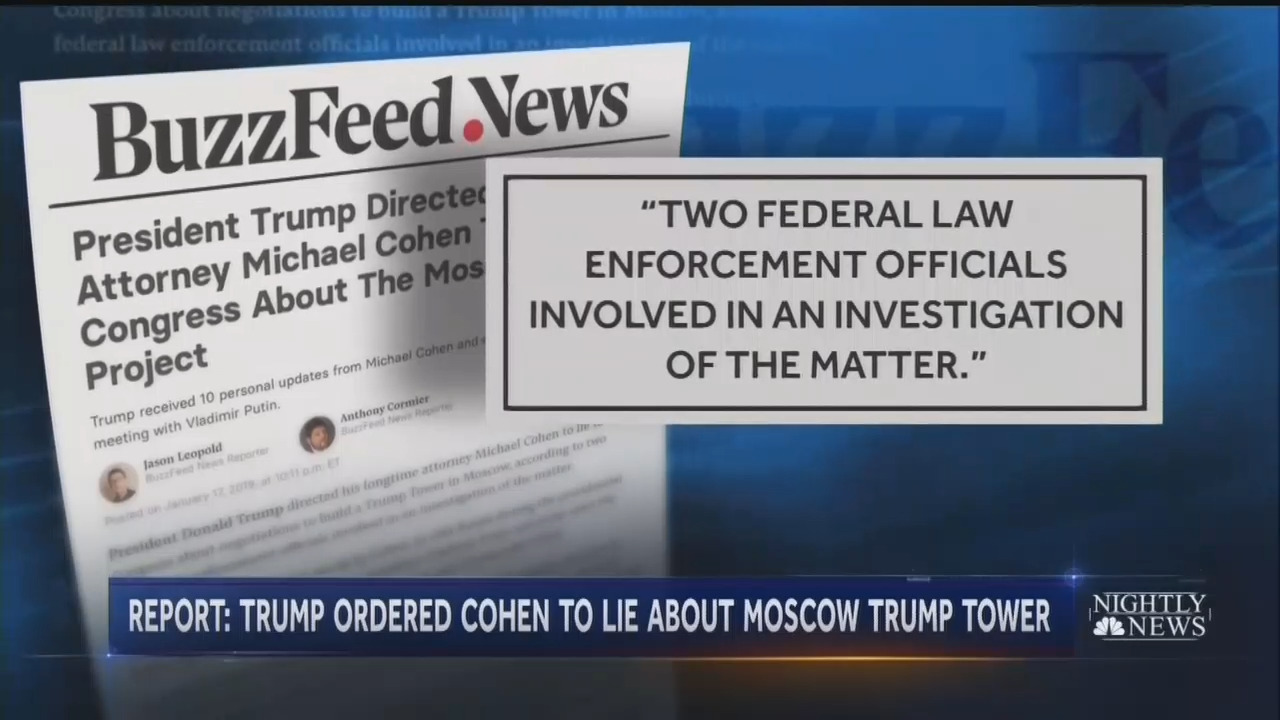 RESTON, VA — On Thursday, Media Research Center Founder and President Brent Bozell released an open letter to NBCUniversal President Jeff Wachtel calling on NBCUniversal to divest itself of BuzzFeed following a pattern of biased and factually inaccurate reporting, including its embarrassing Thursday night story about Michael Cohen and President Trump that was debunked nearly 24 hours later by the Office of the Special Counsel.

In the letter, Bozell asserted that “[t]his was not just a fake story” but instead “a fake story designed to bring down a presidential administration.”

If not, Bozell emphasized that the MRC “will refer to your news divisions as ‘NBC/BuzzFeed’ and ‘MSNBC/BuzzFeed’ to remind the public about how disreputable this association is, and we will encourage others to do the same.”

Below is the open letter in full:

This week Fox News reported that NBCUniversal has already invested $400 million in BuzzFeed and that the two companies have been operating in a “strategic partnership.” The events of the past week raise serious concerns about this ongoing partnership and its impact on your reputation as a news organization.

NBC and MSNBC provided wall-to-wall coverage of BuzzFeed’s discredited Michael Cohen story on January 18th. The story falsely alleged that the Special Prosecutor’s office had proof that President Trump directed Cohen to lie to Congress. It turns out the reporting was so bad that Robert Mueller took the unusual step of debunking it.

The need for additional verification is even more imperative in light of BuzzFeed’s record. One of the BuzzFeed “reporters” who broke the Cohen “story” has a checkered past when it comes to the accuracy of his reporting. In 2006, Jason Leopold broke the false story that Karl Rove told President Bush he was about to be indicted. Even before Mueller refuted the story, CNN reported that Leopold had been involved in fake news stories dating back to 2002.

And according to this Fox News piece, in two separate instances, BuzzFeed founder Jonah Peretti assumed the online identities of Jeff Goldblatt and John Lott in an effort to destroy a business competitor and derail legislation by spreading false information.

Yet on Friday, MSNBC forged ahead with the unvetted Cohen story anyway. This cable network alone mentioned “impeachment” a whopping 97 times. Your partner organization’s fake story prompted CNN to use the same term 82 times.

Also on Friday, NBC spent 10 minutes and 5 seconds covering the story on its network newscasts. In all, the three major networks devoted a remarkable total of 27 minutes and 33 seconds to the debunked BuzzFeed story on that single day.

And at no point during the coverage did NBC or MSNBC disclose the relationship between the two organizations when covering the debunked story.

This was not just a fake story. It was a fake story designed to bring down a presidential administration. And what does running them say about NBC as a news organization? Do you really think adding an online tabloid like BuzzFeed to your portfolio is going to help the situation?

Is it any wonder that media personalities from Anderson Cooper to Chuck Todd to Whoopi Goldberg are bemoaning the fact that the mishandling of this story reinforces every bad stereotype people have about the profession?

There are many more examples of Buzzfeed’s questionable “reporting.”  From mocking the Pope of the Catholic Church, to hit pieces on public personalities it disagrees with, Buzzfeed has always been a dubious “outlet” as even your own Chris Matthews has pointed out.  Acquiring Buzzfeed was precisely the opposite direction your company should have been taking if it wants to strengthen its brand.

NBCUniversal should take a step toward restoring its reputation as a legitimate news organization by divesting itself of BuzzFeed. As long as this close association exists, journalistic ethics demand NBC news divisions disclose the relationship every time they report on a BuzzFeed story. Moving forward, our organization will refer to your news divisions as “NBC/BuzzFeed” and “MSNBC/BuzzFeed” to remind the public about how disreputable this association is, and we will encourage others to do the same.

I welcome the opportunity to discuss this with you further and look forward to your reply.