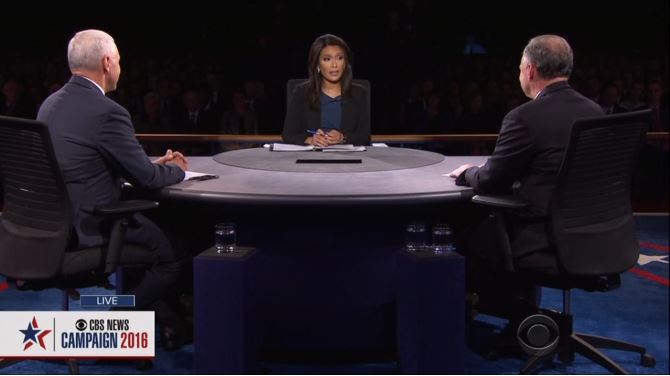 Elaine Quijano is given the honor of a lifetime and she can only muster one tough question for Sen. Tim Kaine, the Democrat? Miraculously, she was able to craft EIGHT challenging questions to Gov. Pike Pence, the Republican.

Once again, it's one standard for the Democrat, a different one for the Republican. This is a broken record. Softballs for Democrats, curve balls for Republicans.

Did no one inform Elaine Quijano that the role of a moderator is to ask questions and take a step back while the candidates DEBATE? Quijano and Virginia’s over-caffeinated senator repeatedly challenged and interrupted Gov. Pence. By the looks of it, he didn't mind the 2-1 disadvantage.

When are Republicans going to learn that the network media are just Democratic Party operatives with press credentials?