If the networks were governed by the FDA, they would have recalled the word "news" from these guys.

The NewsBusters publisher went on to note that CBS devoted just 31 words to McCain's Iraq trip, and that McCain failed to get a traveling correspondent, much less an evening newscast anchor, to shadow him on his foreign trips:

Just think about this. Think about this. John McCain, presumptive Republican nominee wrapped up the nomination and went to Europe and the Middle East for a week. The networks didn't send a single anchor. CBS didn't send a single correspondent. The total number of stories for the entire week was four for the networks. The total number of words dedicated to him, words, 31, by CBS. Now Barack Obama goes to the Middle East, and every anchor is a accompanying him. These guys are traveling press releases for the campaign.

All you have to do is be fair and balanced. You give one kind of coverage to one candidate, give it to the other, it's not rocket science. 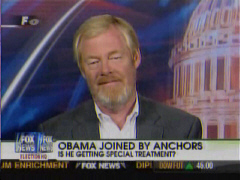 As the MRC noted yesterday in a press release, the media all but ignored Sen. McCain's foreign trips this year:

ALEXANDRIA, VA - In yet another example of slavish adoration, all three network evening news anchors, Brian Williams, Charlie Gibson and Katie Couric, will accompany Illinois Senator Barack Obama on his trip to Europe and the Middle East in August, and deliver their daily broadcasts live from each of the locales along the way.

How outrageous is this? Arizona Senator John McCain has made three trips overseas since March. No anchor has travelled with him on any of them and they provided little if any coverage of any of them.

Sen. McCain went to Europe and the Middle East for a week in March, and the Big Three evening news programs had a total of only four full stories on the trip; one, by NBC's Kelly O'Donnell, was dedicated to McCain mistakenly saying Iran is aiding al-Qaeda in Iraq. CBS did not even send a correspondent along, and offered only one report consisting of only thirty-one words the entire week Sen. McCain was abroad.