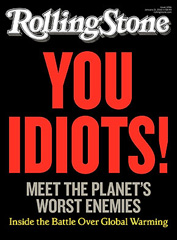 Rolling Stone, a music magazine in the same sense that MTV is a music-video channel, was featured on this morning's edition of Morning Joe.  Their cover story is not about the latest escapades of Kanye West or Lady Gaga; instead, they have chosen to write about global warming.  Before anyone asks, none of the above recording artists (to my knowledge) have recorded a song which would have spawned this article.

"As the World Burns," is the eyes-bleeding hyperbolic title of the article.  Contents: The 17 people whom Rolling Stone calls "climate killers."  And the first target of the article: Billionaire investor and ardent Obama supporter, Warren Buffett:

JOE SCARBOROUGH: You put Warren Buffett on that list, I thought he was an Obama supporter?

ERIC BATES: Warren Buffett has not only trashed climate change legislation calling it a huge tax saying it will cost jobs, he's also been investing heavily in its failure. He bought $26 billion railroad, the biggest acquisition in his career, a railroad that basically hauls coal. It hauls enough coal to power 10% of the country's homes. A big polluter. He's also added another million shares of Exxon Mobil which is the biggest carbon polluter in the country.

SCARBOROUGH: What do you expect him to invest in? Windmills?

BATES: If you think that climate change legislation is going to pass you might start moving towards greener energy and start moving away from some of the dirtier energies. Because, as a sound investor, you'd think that doesn't have much of a future.  He clearly thinks it has a big future.

Warren Buffett isn't the only one who called cap-and-trade a huge tax - Congressman John Dingell, no conservative he, also called it a tax.  "A great big one."

The biggest load of bovine scatology, however, came from Melissa Harris-Lacewell, another wise professor from Princeton.  This lovely person has a doctorate in political science.  While that certainly qualifies her to speak with some authority on things of politics, the premise of this statement is far beyond her area of expertise:

MELISSA HARRIS-LACEWELL (Professor, Princeton University): This ties in to the segment just before that part of what we are dealing with here is a fundamental problem with how government is operating. Responsiveness versus responsibility. The question of climate change is a long-term issue. When you have people like Senator Landrieu making choices in a place that was just devastated by Hurricane Katrina! I lived half my life in New Orleans. It is my house is going to be under water down there because she's making these short-term decisions instead of saying, look, we have to, in a non-partisan way, move forward in a way that's responsible even if it doesn't get us the short-term, two-year, six-year turn-around on re-election.

And that premise is the most deadly of all - that anthropocentric global warming has been proven beyond all reasonable doubt.  The Russian, Chinese and Indian governments would all disagree - as would anybody who read the collection of emails leaked in the ClimateGate scandal.

This gang of “Jersey Shore” journalists, with the backing of an unqualified Princeton-issued propagandist, are advocating that we should radically reshape the foundation of the global economy - at a cost still unknown - based on an idea that has not yet been proven.  It's a wonder they aren't working for the New York Times.
Economy Environment Hurricane Katrina Media Bias Debate Global Warming Covert Liberal Activists Business Coverage Weather Hurricanes Coal Industry MSNBC Rolling Stone Morning Joe Melissa Harris-Lacewell Eric Bates