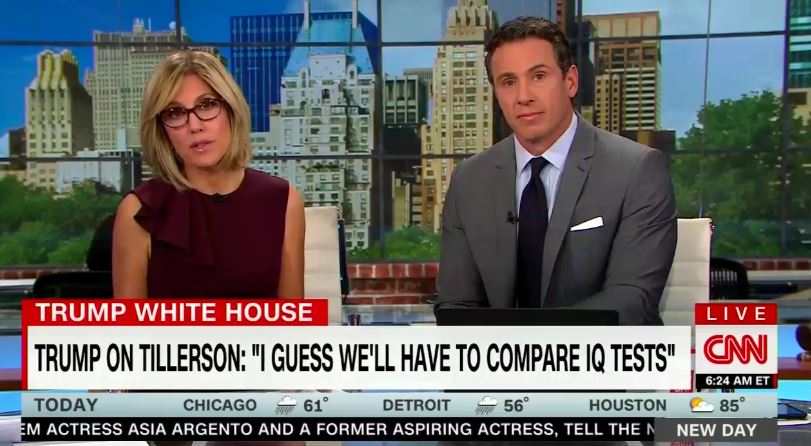 The prosecution rested on October 11 in the corruption trial of New Jersey Senator Bob Menendez. Yet, with a whole day of reporting to work with, CNN has only mentioned this story for a total of five minutes on two shows.

On October 11, The Lead With Jake Tapper gave the story 3 minutes and 9 seconds of coverage. Tapper was the only anchor to cover the story the day that the prosecution rested, with CNN Newsroom covering it for 2 minutes and 2 seconds the following morning.

That same day, October 11, CNN spent 14 minutes and 33 seconds debating whether or not President Trump was serious about challenging Secretary of State Rex Tillerson to an IQ test. Anchor Chris Cuomo introduced this speculative segment on CNN’s New Day by saying “let’s talk about something else that deserves some energy.” However, Cuomo did not seem willing to give the Menendez update “some energy” the following morning (so far, New Day has only mentioned the Menendez trial once: back on September 7).

Since the trial began on September 6, CNN has given it a mere 23 minutes, 4 seconds of coverage, with most shows failing to cover it at all. Sixty-one percent of this coverage (14 minutes, 5 seconds) has been from one anchor, JakeTapper, on his weekday show The Lead With Jake Tapper and his Sunday show State of the Union. CNN’s prime time shows (Erin Burnett OutFront, Anderson Cooper 360 and CNN Tonight with Don Lemon) have failed to cover the Menendez story at all during this time period.