The twin disasters of Hurricanes Harvey and Irma showcased once again the media's reflex to use such tragedies to push for liberal climate change policies.

In their pursuit of this agenda, the broadcast networks' have heavily criticized the Trump administration's policies on the environment. From January 20 through August 31, MRC analysts tallied 75 stories discussing the President and climate change, totaling 73 minutes, 43 seconds of network airtime.

The commentary in these stories was as one-sided as the rest of Trump's coverage has been, with 88 percent of evaluative statements criticizing the President, vs. a mere 12 percent that praised him.

Using these criteria, MRC analysts tallied 121 evaluative statements about the Trump administration’s approach to the environment from January 20 to August 31, 2017, of which 106 (88%) were negative vs. a mere 15 (12%) which were positive. 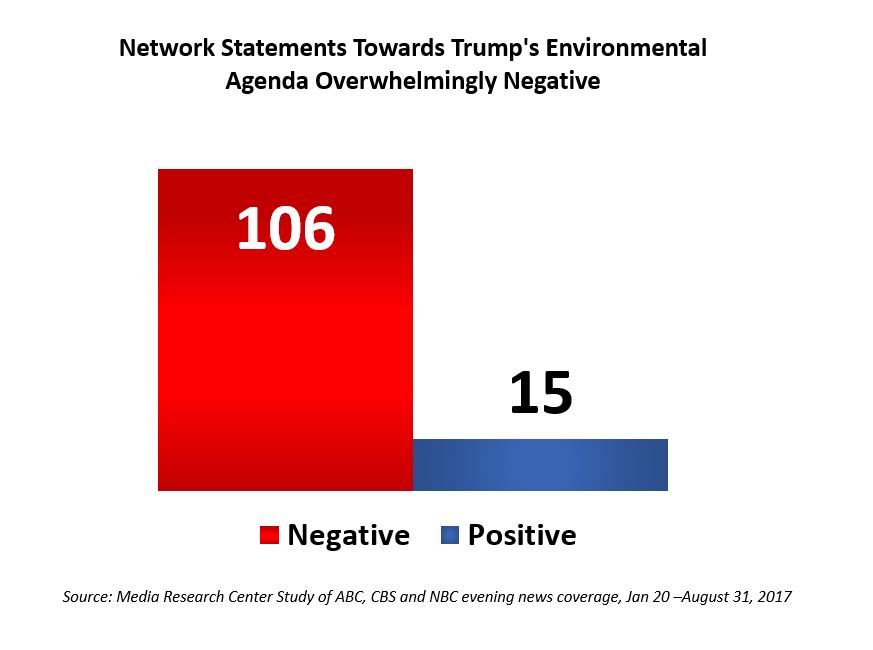 This study does not look at all climate change-related stories during this time frame. Instead, it covers specifically the coverage of President Trump’s environmental agenda on ABC World News Tonight, CBS Evening News and NBC Nightly News.

The most consistent factor in all of this coverage was the criticism. NBC Nightly News correspondent Matt Bradley’s July 30 quip that “President Donald Trump shifts American climate commitments into reverse” was typical of the media attitude towards the president’s environmental policies.

On June 2, Nightly News correspondent Kristen Welker promoted an anti-Trump protest over this decision, hyping “the backlash is only heating up.”

The same night, CBS Evening News’s anchor Anthony Mason spoke of the “world of opposition to withdraw from the Paris climate accord.” Correspondent Chip Reid echoed by referencing “worldwide condemnation.”

NBC Nightly News, anchor Savannah Guthrie on June 1 criticized the move to withdraw from the climate treaty: “detractors say it is a stunning abandonment of the U.S.’s leadership in the world, and a grave threat to the planet itself.”

To their credit, CBS stood alone in interviewing a conservative to hear the other side of the climate change debate. On April 22, CBS Evening News, correspondent Dean Reynolds noted that Joe Bast, CEO of The Heartland Institute, “looks with approval on Mr. Trump’s decision to roll back regulations limiting greenhouse gases, and to his appointments of fellow skeptics in the administration. Climate change, he [Bast] says, is a naturally occurring cyclical phenomenon caused mostly by the sun, not an approaching disaster accelerated by carbon dioxide emissions caused by humans.”

However, before stating this position, Reynolds noted that “most climate scientists, the United Nations, as well as NASA, dismiss these arguments as propaganda for fossil fuels.

On March 28 NBC Nightly News profiled “celebrations in coal country” over Trump’s environmental proposals, mentioning a barber shop in West Virginia where “they cheered the move, hoping it will bring back jobs.” Afterwards, correspondent Kristen Welker noted that “federal data shows mines have been losing jobs for decades under both parties. Right now, there are less than seventy-five thousand coal jobs, compared to more than six hundred and fifty thousand in renewable energy, which can be less expensive to produce.”