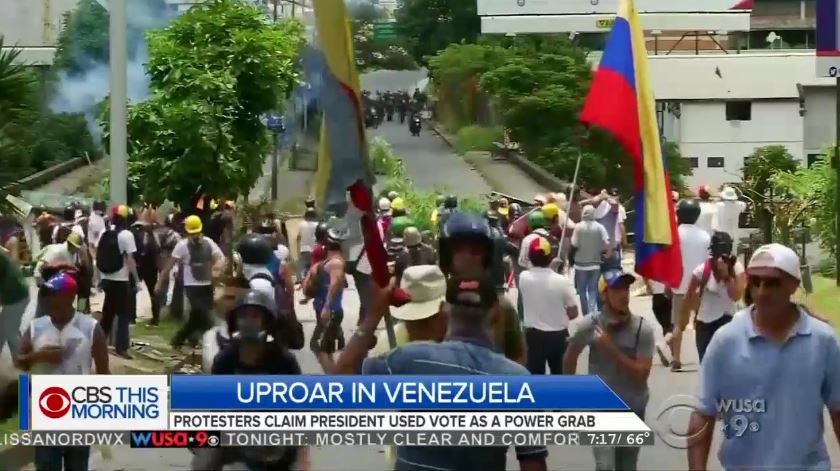 Venezuela’s president held a sham election on July 30 that created an assembly out of his own supporters, to bypass that country’s elected representatives and rewrite the constitution.

But, inexcusably, the broadcast networks seem to be going out of their way to avoid reporting on this glaring example of how socialism inevitably turns out, if it’s allowed to continue unchecked.

Venezuela is the third-largest supplier of oil to the United States, and is now poised to become a resource-rich totalitarian regime, unnervingly close to the United States. More than 140 people have died in protests in the last four months alone, according to NBC Nightly News, as President Nicolás Maduro continues to solidify his hold on the country.

Faced with the possibility of starvation, a growing number of Venezuelans have been applying for asylum in the United States, while others are streaming across the border into Colombia. Alarmed by the unrest, the State Department has issued a warning, asking U.S. citizens not to travel to the country.

Monday’s ABC’s Good Morning America and NBC’s Today completely ignored Maduro’s vote to rewrite the Venezuelan constitution. While World News Tonight did briefly cover the vote (for 37 seconds), it did so without using the word “socialist” – an indefensible trend the broadcast has kept up at least since former Venezuelan President Hugo Chávez’s death in March of 2013.

Even worse, the brief failed to mention any of the rampant poverty, brutal crackdowns or any other regime abuses. Instead, it focused mainly on violence by an “enraged” opposition. Instead, it ended by mentioning how “opposition leaders” say Maduro is “looking to install an autocratic system,” but with no reference to the series of steps he’s already taken to do just that. 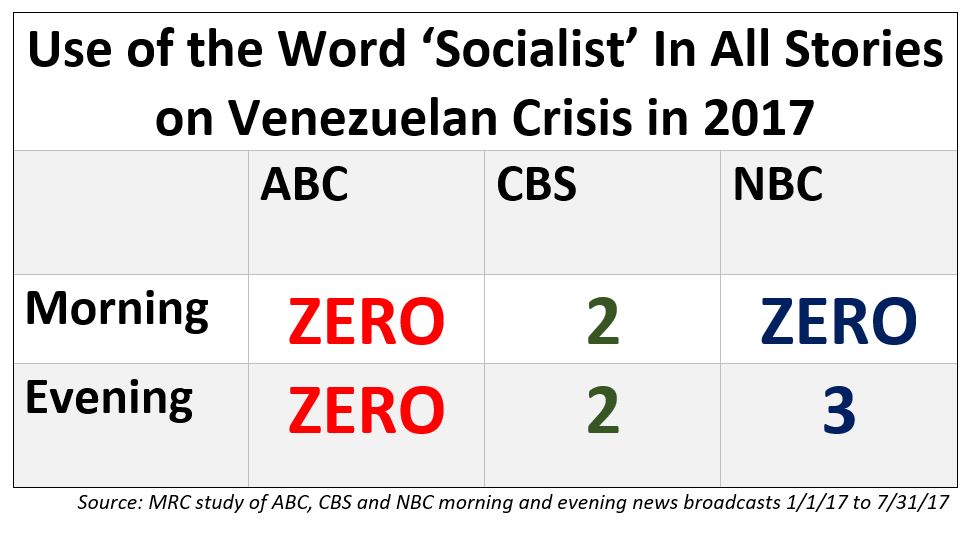 Meanwhile, Today has yet to cover Venezuela’s problems at all in 2017, and all Good Morning America coverage for the year combined still comes in at under a minute (56 seconds).

The CBS Evening News on July 30 was preempted by golf, but the July 29 broadcast also failed to mention the upcoming vote. The day after the vote, July 31, neither ABC’s Good Morning America or NBC’s Today even referenced this at all.

To their credit, both NBC Nightly News and CBS This Morning recognized the seriousness of this vote, each running full reports. But, in doing so, they proved the hypocrisy of the shows that failed to report on what at least some journalists agree to be an important issue.

On NBC Nightly News on July 30, anchor Jose Diaz-Balart recognized that, “the country with the largest oil reserves on earth held a special election that critics say could lead to a dictatorship.” After pointing out that the “all of the candidates today are Maduro supporters, including his wife and son,” Diaz-Balart noted that “The U.S. and other countries around the world have condemned today’s election.”

CBS This Morning mentioned that “demonstrators believe the election continues to hurtle the country toward dictatorship with president Nicolás Maduro and his socialist party at the helm,” although correspondent Manuel Bojorquez only indirectly blamed socialism for the “falling oil prices coupled with skyrocketing inflation” that are crippling the Venezuelan economy.

The problems in Venezuela that are now coming to a head have been building for years. As Margaret Thatcher famously noted on this topic, “The trouble with Socialism is that eventually you run out of other people’s money.” With poverty so extreme that citizens are rationing toilet paper, the situation is ripe for the strong man takeover that Maduro is orchestrating. In a 2016 recap of an evergreen 1995 essay, Mark J. Perry of the American Enterprise Institute referred to the socialism as a “pyramid scheme” that “promised, prosperity, equality and security” while “it delivered poverty, misery, and tyranny.” That is exactly what we’re seeing play out in Venezuela.