Venezuela Descends Into Dictatorship, But Networks Can’t Be Bothered 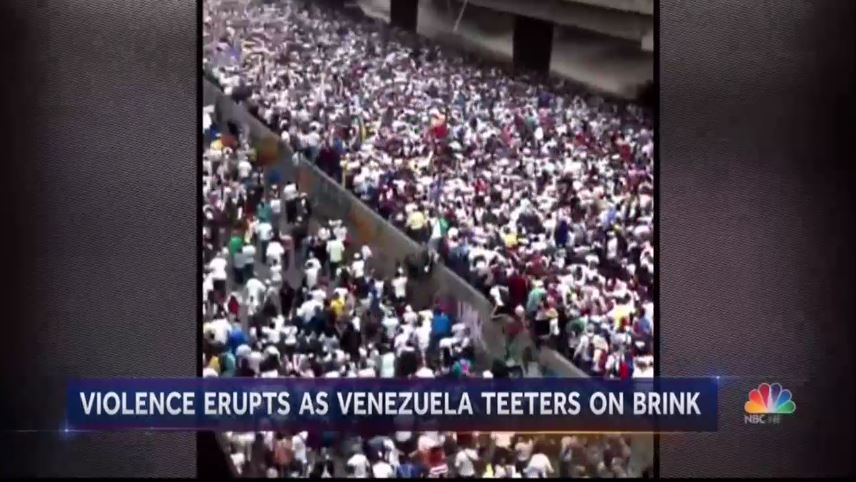 With over 100 Venezuelans dead from the rapidly escalating violence between the government and protesters, a special vote will take place on July 30 to give authoritarian president Nicolas Maduro the power to rewrite the Venezuelan Constitution to strip legislative power from the rightfully-elected National Assembly. After years of struggling with the failures of socialist policy, the people of Venezuela are dangerously close to being subjected to an absolute dictatorship.

NBC’s Today had the worst coverage, failing to mention the crisis in Venezuela even once during all of 2017. ABC’s Good Morning America wasn’t much better, with 37 seconds of total coverage all year. NBC Nightly News and CBS This Morning had the most coverage all year, comparatively, with a paltry 5 minutes 5 seconds and 5 minutes 36 seconds, respectively. ABC's World News Tonight gave the situation 4 minutes and 21 seconds and CBS Evening News gave it 3 minutes and 12 seconds.

In addition, what little coverage there was painstakingly avoided the words “socialism” and “socialist” ABC’s World News Tonight continues its record of failing to use the word “socialism” even once in connection to this story – as they have at least since Chavez’s death in 2013. Additionally, ABC’s Good Morning America, and NBC’s Today haven’t used the “socialist” label in their meager coverage of the unrest, in all of 2017. In fact, the term has been used a total of five times all year: twice each on Evening News and Nightly News and once on CBS This Morning.

Here's how the networks covered a few selected, important stories on this topic.

April 20: Maduro’s government seized a General Motors plant, leading to the plant shutting down and the loss of nearly 2,700 Venezuelan jobs. According to The Washington Post, “[s]ome analysts saw it as part of a pattern of confrontation between the Maduro government and manufacturers as the economic situation deteriorates.” This was only one, albeit substantial, example of Maduro’s government seizing assets from foreign-based companies in the country.

May 18: Prodded by Maduro, the socialist-dominated Supreme Court ruled to strip power from the anti-Maduro Venezuelan National Assembly. The move caused the Trump Administration to impose sanctions on members of the court, as a warning against a regime that is growing increasingly bold in its consolidation of power.

Ignored by: All six broadcast morning and evening shows

July 16: In a non-binding referendum, 98 percent of Venezuelan voters chose to keep their existing constitution, in defiance of Maduro’s power grab. Refusing to back down, Maduro called the referendum illegal and proceeded with his plans to change the constitution anyway.

July 17: President Trump released a statement acknowledging the results of the non-binding referendum and stating that “The United States will not stand by as Venezuela crumbles.” Trump promised “[i]f the Maduro regime imposes its Constituent Assembly on July 30, the United States will take strong and swift economic actions.”

Covered by: CBS This Morning (26 seconds).

July 20: A nationwide strike took place to oppose Maduro’s government, leading to more violence. At least a dozen people were injured in clashes with the National Guard, and a prominent opposition leader was hospitalized after being wounded by shrapnel.

July 30: Maduro calls a sham vote to rewrite the Venezuelan constitution. The vote will allow him to create a new national assembly that can overrule the existing one, preventing opposition leaders from appointing anyone new to the Venezuelan Supreme Court, and essentially quashing the legal authority of the opposition.