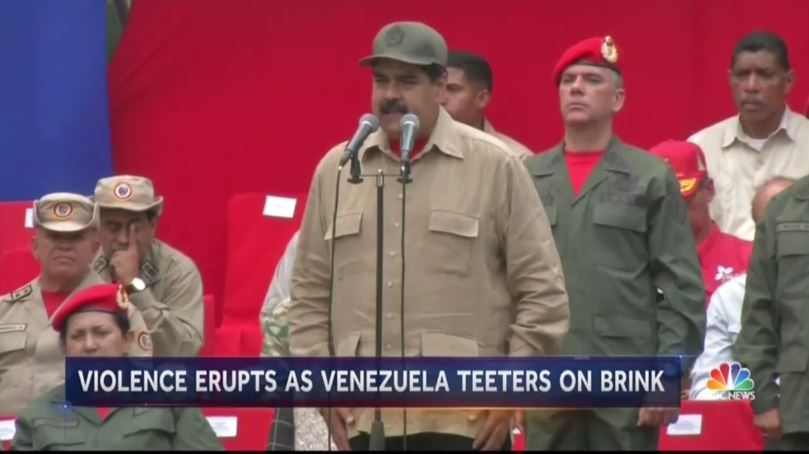 Just this year alone, more than 50 people have been killed protesting the heartbreaking malpractice of Venezuela’s socialist dictatorship. According to the IMF, inflation will surpass 700% this year, while unemployment will hit 25%; shortages of necessities such as food and medicine are rampant. The socialist president has cracked down on any opposition, and used the Venezuelan Supreme Court to nullify the election of an opposition-controlled Congress.

Yet the Big Three evening newscasts have tried to pretend this crisis does not exist, offering virtually no coverage as the situation has deteriorated over the past four years. A new study by the Media Research Center found that from March 2013 (after the death of strongman Venezuelan president Hugo Chavez) through May 29, 2017, the ABC, CBS and NBC evening news shows have aired a mere 25 stories, totaling 28 minutes, 39 seconds of coverage — barely 30 seconds per month — to the rapidly worsening situation in Venezuela. In this same time period, approximately 50,000 individual news stories on other topics aired on these broadcasts (our Bias by the Minute database shows a little more than 1,000 stories per month, and the time frame looks at slightly more than 50 months).

The networks have also been reluctant to attach the “socialist” label to Venezuela’s government, and have utterly failed to criticize liberal politicians and celebrities who have praised the Chavez and Maduro regimes.

■ Turning a Blind Eye to Disaster: MRC looked at all evening news coverage of Venezuela since March 4, 2013, when then-president Hugo Chavez died. Chavez’s death was seen as an opportunity to move beyond his cult-of-personality socialism. Instead, his replacement Nicolás Maduro reacted to the public’s obvious dissatisfaction by further restricting freedoms and silencing any opposition.

None of the Big Three have offered very much coverage, but the NBC Nightly News at least offered more than its competitors, broadcasting 13 stories totaling a meager 16 minutes, 54 seconds. ABC’s World News Tonight followed with 8 minutes, 34 seconds (7 stories) and the CBS Evening News trailed with a paltry 3 minutes and 11 seconds (5 stories).

As the socialist regime has chipped away at the country’s democratic institutions, the networks have largely turned a blind eye. Key examples (for a complete timeline of the crisis of Venezuela, check out this BBC link):

■ In September 2013, Maduro seized on a massive blackout that left 70 percent of the country without power, using it as an excuse to crack down on the opposition. Network coverage: ZERO stories.

■ In November 2013, the then-socialist controlled National Assembly gave Maduro “emergency” powers, permitting him to bypass the National Assembly. Since then, Maduro has repeatedly declared Venezuela in a state of emergency, ruling by decree. Network coverage: ZERO stories.

■ In December 2015, the opposition party won control of the National Assembly from the unpopular socialists, with voters handing them a super-majority of 112 seats vs. 55 for the socialists. Network coverage: ZERO stories

■ In September 2016, there were massive protests against the government, as hundreds of thousands of citizens demanded a recall vote against Maduro. Network coverage: ZERO stories.

■ On May 18, the socialist-dominated Supreme Court ruled to strip power from the anti-Madura Venezuelan Congress. Network coverage: ZERO stories. 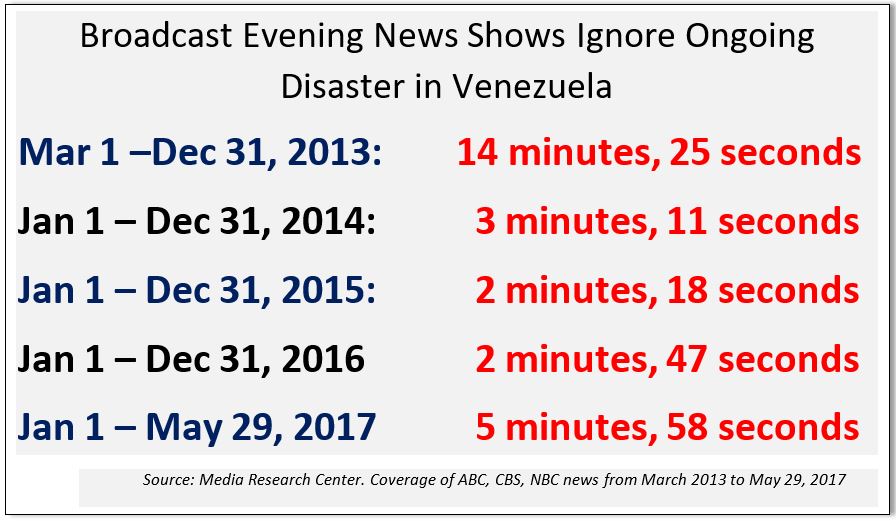 Human Rights Watch has condemned the Venezuelan government for silencing media opponents, saying that the regime “has expanded and abused its powers to regulate media and has worked aggressively to reduce the number of dissenting media outlets....While some newspapers, websites, and radio stations criticize the government, fear of reprisals has made self-censorship a serious problem.”

But over the past four years, the Big Three evening newscasts have made no mention of the persecution of their brethren in Venezuela.

For its part, Amnesty International has criticized the regime’s ongoing detention of more than 100 political prisoners. Both of these groups were often cited by the network evening news shows for other reasons during the time frame of this study (17 times for Human Rights Watch and 14 times for Amnesty International), on issues ranging from Boko Haram to the war in Syria. Yet, their condemnations of Venezuela have gone completely untouched.

Just last week, the Heritage Foundation’s Stephen Moore called out the media for their perpetually bad reporting on this topic. “Venezuela is a human rights crisis of epic proportions with mass hunger, mass poverty, despair, ghetto upon ghetto, and a mass exodus of private businesses and anyone with money....Yet, no one in the media seems to pay any attention to this man-made disaster.”

■ Networks rarely ‘socialist’ label: If TV news coverage of the Venezuelan disaster has been rare, the network story that referred to Maduro and his cronies as socialists was even rarer. In more than four years, ABC World News Tonight has failed to ever call the Venezuelan government “socialist” or even refer to “socialism” in connection with this story. CBS Evening News has only used it once, while NBC Nightly News has used the term 6 times.

One of the exceptions: On the April 20 NBC Nightly News, correspondent Jacob Rascon noted that “The Venezuelan economy has been in freefall for years...Protesters blamed President Nicolas Maduro and his socialist government.”

On May 4, CBS Evening News anchor Scott Pelley finally used the term for the first time since Chavez’s death, when reporting on the worsening situation. “Running battles continue in Venezuela’s capital. They broke out a month ago when the socialist president tried to grab more power. At least thirty-seven have been killed.”

While ABC hasn’t even made a passing reference to socialism on the morning and evening news shows at all, Nightline correspondent Matt Gutman used the term on February 14: “When the price of oil crashed, the economy went with it, exposing the failures of Hugo Chavez’s socialist government.”

Unfortunately, this insight never made it to World News Tonight.

While largely skipping the “socialist” label for Maduro and Chavez, the networks have at times romanticized their cause. On March 5, 2013, when reporting that Chavez had died earlier that day, Pelley asserted that “Chavez was a hero to Venezuela’s poor” – without mentioning that these were the very people his policies hurt the most.

■ Pro-regime celebrities and lawmakers don’t get criticized: In spite of the misery caused by Venezuela’s socialist government, the media have offered no criticism or ridicule to those liberal politicians and celebrities who have cozied up to the regime.

Director Oliver Stone praised Chavez as “a great hero to the majority of his people.” Stone also released “South of the Border,” which contained such blatantly pro-Chavez propaganda, that even the New York Times and the Huffington post slammed it.

Yet, none of these three celebrities were criticized for promoting a foreign despot.

NBC Nightly News on March 8, 2013 did cover the Reverend Jesse Jackson speaking at Chavez’s funeral, saying “let there be peace between nations,” but they reported this without criticism.

Sharp-eyed television viewers, especially those here in the east, may have seen the TV commercial and wondered what was up. In it, we see a Kennedy, Joe Kennedy, son of Bobby and a former congressman himself, saying nice things about Hugo Chavez of Venezuela. He says he’s happy to do it. At the heart of it is Kennedy’s years of work to deliver heating oil to folks in New England who can’t afford it.

Even as the misery of the Chavez-Maduro regime cascaded over Venezuela, there’s been no follow-up criticizing Kennedy for his sycophantic support for their socialist failure.