During the past six months, the broadcast networks have provided massive coverage of the Trump presidency, but last night they had almost no time to let viewers know about an actual success of his administration.

The President's announcement on Wednesday of a $10 billion investment in a U.S.-based manufacturing plant in Wisconsin drew a scant 40 seconds of news coverage on the CBS Evening News (15 seconds) and NBC Nightly News (25 seconds), while ABC's World News Tonight skipped it entirely. The continued record run of the stock market under Trump – the Dow Jones Industrial Average hit another all-time high on Tuesday – was utterly ignored.

In addition, Amazon announced that it planned a massive job fair, with plans to hire 50,000 new employees. This got only 14 seconds of coverage, and only on ABC’s World News Tonight.

Yet, when it came to controversies involving President Donald Trump, the networks continued their relentless coverage with 16 minutes and 19 seconds – roughly a third of the total airtime for all of those broadcasts combined. Last night this coverage focused on Trump’s tweets about transgendered military members and Attorney General Jeff Sessions, but while the topics may be new the negative coverage of this presidency has been constant. 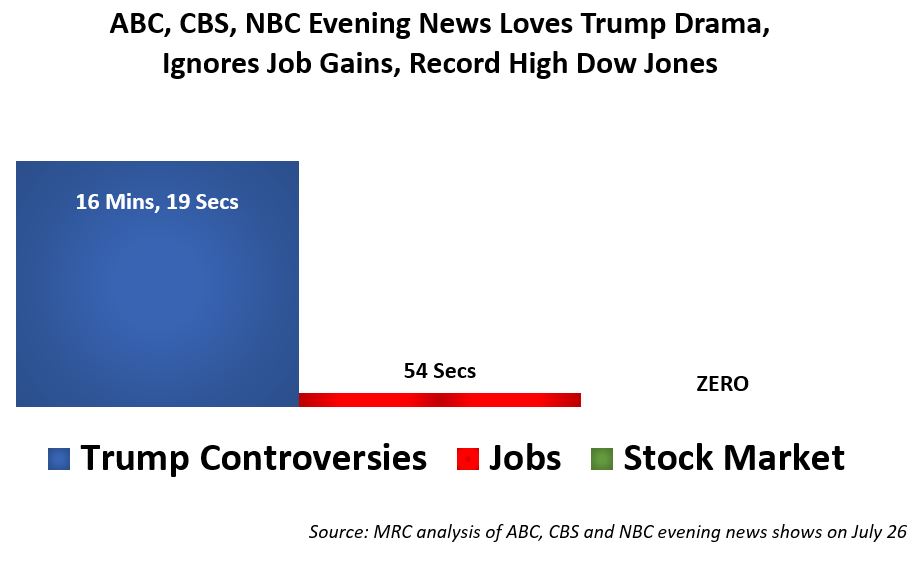 On top of this, in typical fashion, the networks continued to ignore the arrest of one of congresswoman and former DNC head Debbie Wasserman Schultz’s staffers, who was caught in the act of allegedly trying to flee the country.

On Wednesday, the chairman of Taiwanese tech giant Foxconn announced at the White House that his company would open a factory in Wisconsin. According to a tweet from President Trump, this would create “up to 13K new jobs” in the state.