On MSNBC’s Morning Joe on Tuesday, the roundtable turned to the NBC "town hall" Secretary Hillary Clinton had on gun control and other topics. Mike Barnicle began the discussion by declaring that “it would require courage, commitment and a constant hammering on it to get it done.” What was getting done? Preventing the sale and ownership by civilians of AR-15s and AK-47s. While both Sandy Hook and the Umpqua mass murder shootings were committed with handguns, that didn’t stop Barnicle from leading the charge on banning the ownership of semi-automatic rifles, particularly those that he labelled “assault weapons.”

Mika Brzezinski would up the ante by wanting to know why anyone needs to own that many guns, referencing Christopher Harper Mercer’s mother, who had in online forums admitted to owning 14 various types of guns, particularly those dreaded “assault weapons” AK-47 and AR-15.

While Joe Scarborough and Eugene Robinson discussed the hardship of parenting and holding parents responsible for their adult children, Willie Geist chimed in with reason when he pointed down “if you want to arrest or detain or kick down doors of 100 million people, then maybe you can tighten it, but there's not a quick easy law you can pass that stops a lot of these mass shootings.”

That didn’t stop Al Hunt from jumping into the fray and saying we “can't let the perfect be the enemy of the good. The Brady Bill, research shows it did diminish those. Still a lot. If you do piecemeal, do little things which are hard to do, I agree with Mike Barnicle, AK-47s are not used to bag Bambi.”

See the relevant transcript below.

*MIKE BARNICLE: You’re not gonna take guns away from people. Nobody is talking about that. There's one other opening she alluded to, she didn't reference it specifically, and it would require courage, commitment and a constant hammering on it to get it done. The woman, mother of the shooter, Christopher Harper Mercer, there was a piece in the Times and stories in the paper yesterday, among the 14 weapons that family had, AK-47 and AR-15.  You were talking about Afghanistan and Iraq that was what those weapons were designed for, AR-15 and AK-47. They are military assault rifles. There’s no good reason why legitimate hunters or legitimate gun owners would have AR-15s and AK-47s in their arsenal. They oughta be banned from civilian use. And it would take courage on the part of politicians to keep hammering it. I just have a sense among legitimate hunters it's a winner. 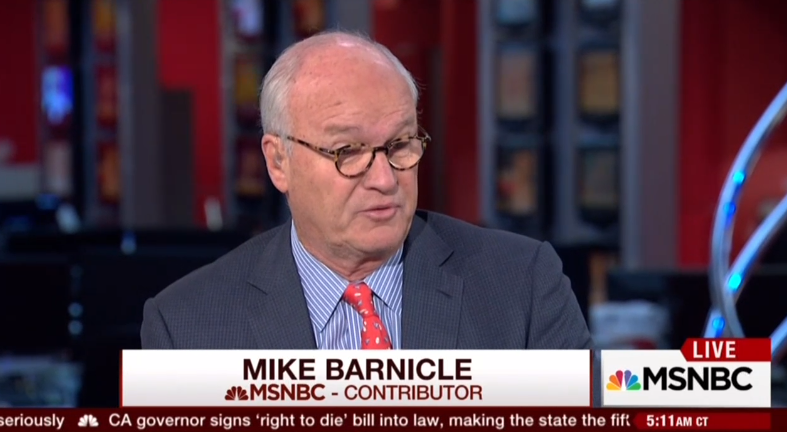 MIKA BRZEZINSKI: Yeah she wrote about her own use of firearms. She owns many as well. And knew very much about her son's purchasing of these guns. He helped her understand the gun laws. It's kind of extremely disturbing. They both had some medical issues.

EUGENE ROBINSON: It's hard to do anything, Joe. It's hard. It's hard for parents, especially for parents of adult children to get them, you know, if they see the behavior and they see the problem rising, if no one has been hurt yet, if you can't prove the person is, you know, definitively a threat to himself or to others, it's very difficult with our mental health system the way it is now, to get the mandatory help some people need.

SCARBOROUGH: That's Willie, what I was talking about yesterday on the New York Times article, where I was going in, okay what law could have passed and you go through all of them and at the end of the day it's what Gene is saying. On most of the shootings if you want to arrest or detain or kick down doors of 100 million people, then maybe you can tighten it, but there's not a quick easy law you can pass that stops a lot of these mass shootings.

WILLIE GEIST: That's what I was going to say. Sometimes it boils down not to a law, you can change some laws, but in these specific cases where these mass shooters it comes down to personal relationship inside a household and that's the last line of defense a lot of times. Not a law but someone in the house who can step in.

AL HUNT: I disagree. No, I disagree. I don't think, you can't let the perfect be the enemy of the good. The Brady Bill, research shows it did diminish those. Still a lot. If you do piece-meal, do little things which are hard to do, I agree with Mike Barnicle, AK-47s are not used to bag Bambi. But 20% who is in opposition is all they care about. So it’s hard to do, but I don’t think that means we shouldn’t do anything.