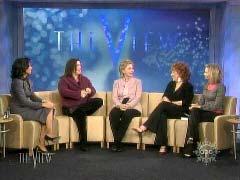 New York Senator Hillary Clinton appeared on Wednesday’s The View to discuss politics and the re-release of her book, It Takes a Village. While there was some cheerleading for the 2008 Democratic presidential frontrunner by co-hosts Joy Behar and Rosie O’Donnell, for the most part, there seemed to be a great deal of restraint on all sides during Clinton’s two segments. Asked about a potential run for the White House, Clinton again said she was thinking about it "trying to sort all this out." On the war in Iraq, Clinton only got one challenging question in regards to her support of a "phased redeployment," from co-host Elisabeth Hasselbeck:

Elisabeth Hasselbeck: "Do you think pulling them out too early will–would equate to–sometimes I think of it as, you know, not finishing all of your antibiotics. Okay, there’s a problem there."

Hasselbeck: "So if you pull out too early, will that create more chaos?"

Behar was the first to mention Iraq during the Clinton interview. She asked the Senator about how she currently feels about her vote in support of the war in 2003. Clinton responded by calling for a "phased redeployment" of troops, which Hasselbeck challenged:

Behar: "Last time you were here, I asked you if you were sorry that you didn't vote against the Iraq war. Do you remember that?"

Clinton: "I do remember that."

Behar: "How do you feel about it now?"

Clinton: "Well, I, you know, I have said repeatedly that, you know, if we had known then, there wouldn't have been a vote, what we know now. The problem is we’ve got to figure out what to do going forward. It, it really, you know, it’s, it’s, it’s such a serious challenge to us and part of the problem is that I think the comprehensiveness of the need for a strategy is something that I don't get a feel that the President and his advisors are really looking at. So I'm hoping that they will, you know, really follow the lead of what the Democrats have been saying for, you know, more than a year, when we voted for something called phased redeployment, which is, we have to begin bringing our troops home."

Behar: "But that's not what he's saying now. He’s saying increase the troops."

Hasselbeck: "He’s saying–[crosstalk] in the short term, right? Is that the plan? Increase the troops short term–"

Clinton: "Right. But, but the problem is that, how will it be different? Will this Iraqi government let our troops go after the terrorists? Will they let them go after the people who are causing the violence or will they say no and pull them back again? So, if it's not going to change the mission, if it's not going to be a different strategy, I don't see where putting more troops will make a difference."

Hasselbeck: "Do you think pulling them out too early will–would equate to–sometimes I think of it as, you know, not finishing all of your antibiotics. Okay, there’s a problem there."

Hasselbeck: "So if you pull out too early, will that create more chaos?"

Clinton: "That’s right. Well, the, but, but the issue is, how do we get the Iraqis to start taking responsibility for themselves?"

It was during the second segment with Clinton that the ‘Hillary-for-President’ cheering arose from Behar and O’Donnell. Discussing working moms and child care, Hasselbeck asked if a female presidential candidate would have an edge over a male rival:

Hasselbeck: "Do you find that that is–being a mom and having worked as a mom and being able to multitask, does that give a would-be president kind of an edge up on, say, a male rival?"

Hasselbeck: "Do you think that?"

Clinton: "Well, you know, Elisabeth, nobody’s ever, nobody’s ever been in a position to ask that question, cause we’ve never had a mother who ever ran for or held that position."

O’Donnell: "But we need one soon!"

Behar was the most enthusiastic supporter of Clinton amongst the View panel, which was clear during this exchange with the New York senator:

Clinton: "Our schools have to be more in tune with what goes on. I mean, how can working parents get to child conferences if they're in the middle of the work day, if they're not given some time off to be able to do that?"

Behar: "So, do you think it would help to have a woman in the White House? I mean, let's go there!"

Crystal McCrary Anthony [laughing]: "She’s not biased at all!"

One wonders if a potential female Republican presidential candidate would be treated with the same level of awe as Clinton. With O’Donnell and Behar’s track records of attacking the GOP and conservatives, it would seem safe to assume that would certainly not be the case.