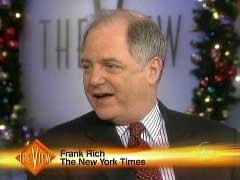 Liberal New York Times columnist Frank Rich was among friends during his appearance on Wednesday’s edition of The View. While co-hosts Elisabeth Hasselbeck and Rosie O’Donnell were nowhere to be found during the segment, Joy Behar and Barbara Walters allowed Rich to promote his book, which Walters herself said "tears the Bush White House apart." While Walters did pose one challenge to the writer’s assertion that the Iraq war cannot be won, most of the questions directed to the columnist would not be considered so tough.

Walters began the interview with the Times columnist with this glowing introduction:

Barbara Walters: "Every Sunday, millions of people turn to New York Times columnist Frank Rich to hear his views on everything from politics to pop culture. That's how important his opinions are. Not everybody loves his opinions, and in his new book, The Greatest Story Ever Sold, he absolutely tears the Bush White House apart. This is a book that is such fascinating reading."

Walters first asked Rich about his most recent column, in which he argued that the war in Iraq was already lost:

Walters: "So last week, in your column, you said it's not about winning this war, we've already lost it and we should get out, right?"

Rich: "Yeah. I think that, you know, we have a situation where it's getting worse by the day, in terms of the violence, the dangers for American troops that are bravely fighting over there. And we might as well figure out how we're going to cut our losses and get out in the best possible way, cause it's not going to get better. It’s sort of a fantasy to think it will."

Walters followed up with the one "tough" question Rich would face for the remainder of the interview:

Walters: "But there are people, including the President, you know, that still talk about winning and that say that if we get out now, it will be such chaos in the Middle East and we will never be respected again and the worst thing we can do is get out."

Rich: "We have no good choices. I think it’s going to be chaos whether we stay or go. I think the reason to think about some sort of timetable for getting out now is we can still be in control of it and manage it. It's getting worse by the day and at a certain point, the events on the ground in Iraq could take it away from us, the right to make decisions."

Joy Behar then chimed in and asked Rich why the administration went into Iraq in the first place.

Joy Behar: "Why do you think we went in there in the first place?...What is your read on why they did that?"

Rich: "I think, you know, the war against the Taliban, against the people who attacked us like al-Qaeda on 9/11, was winding down. We knocked out the Taliban in Afghanistan in the fall of, of ‘01. And I think the feeling was this was an easy add on, be a cake walk. We could take out this thug, which Saddam Hussein is, and be home by Christmas, and that was the plan."

Behar then wanted to know if the administration had been "lying" when it argued that there had been a connection between Iraq and the terrorist attacks of September 11th. Rich responded by comparing the "selling" of the Iraq war to the way makeup and cereal are sold:

Behar: "We know now know that he didn't really have anything to do with 9/11, so were they misinformed or were they lying?"

Rich: "Well, the whole point of my book is it seems that they basically trumped up two stories. One was, as the President himself has now said this year, that somehow there was a connection between Iraq and 9/11, and there was none. And, and the other was the weapons of mass destruction were poised to send mushroom clouds to American cities."

Rich: "My point in the book is to show, really, in a very straightforward way, how they rolled this out. They sold it the way they might sell Cheerios, you know, or cosmetics. And just by pounding it over and over again in our heads til we–the country was in a state of hysteria and thought this war was essential."

Walters then asked Rich if there was "still a story that’s being sold" to the American people:

Walters: "Are we still doing that? Is there still a story that’s being sold?"

Rich: "Well, I think that they've lost control of the story, because what’s happened in the past few months is that we see on television what's going on in Iraq, and they can't control it. That's the whole problem. And so now they really seem to be losing control of it. Their memos leaking, you know, Rumsfeld–Rumsfeld memo just before he was fired was leaked, and, and, you know, they don’t really have control anymore."

Behar then asked Rich whether the federal government's response to Hurricane Katrina demonstrated to Americans that President Bush was "out of control" and "incompetent."

Joy Behar: "Don't you think the tipping point was Katrina, when the United States, the American people saw that this, that this President was out of control and incompetent in many ways?"

Rich: "I think when Katrina happened, and that’s why I ended the book there, cause I thought that was sort of the third act, the final curtain of the story. When people saw federal officials saying everything was hunky dory in New Orleans and yet it wasn’t, and people were screaming for help at the Superdome, people understood that was also what happened in Iraq. We kept being told mission was accomplished, everything was great, and it wasn’t. I think people put two and two together and that's when his poll ratings started to collapse."

The focus of the discussion then turned toward Mel Gibson and a comment he made directed at Rich, saying, "I want his intestines on a stick and to kill his dog." Frank explained that Gibson was upset over his criticism of Passion of the Christ, which, as Clay Waters reported here at TimesWatch in March 2004, Frank described as a "joy ride for sadomasochists." Behar and Rich went on to discuss what they see as Gibson’s seeming penchant for violence and poked fun at his July 2006 drunken rant:

Behar: "About Frank. He said, ‘I want his intestines on a stick and to kill his dog.’ Why doesn't he like you?"

Frank: "And the horrible thing is, I don't even have a dog. I guess–"

Behar: "He'll buy one for you and then kill it."

Frank: "I think that's a new movie, Apocalypto, I think there’s a lot of killing in that. I was very critical of Passion of the Christ. I felt it was not a movie that was fair to basically the Jews of that period. And he took great exception, and I guess in his less than sober period, because it was a year or two ago, right–"

Walters: "Now you see why they all love Frank, right?"

Rich: "He, he made that remark to the New Yorker and–so I can never get a dog."

Behar: "It's part of his, his lexicon, violence, you know. The Apocalypto is, is violent. The Passion of the Christ, poor Jesus, what they did to him in that film. And then I want his intestines on a stick? I mean?"

Rich: "Well, it, it’s a good description of his kind of film making. I mean, if you want to see intestines on a stick, go see a Mel Gibson film..."

The segment then turned into a discussion of the country’s fascination with party girl celebrities like Paris Hilton and Britney Spears. Rich argued that such "escapist entertainment" was a good distraction for the nation, because thinking about Iraq too much would cause us to "take a gun to our heads":

Rich: "You know, 9/11 was a huge shock, this war has gone poorly in Iraq, so people want some escapist entertainment and it's much more fun, I guess, to think about Nicole Ritchie and Paris Hilton than to think about the troops that were killed that day."

Behar: "So–yeah, it’s easier to think of crotch shots of Britney than to think about Iraq, frankly. It is. It’s a nice distraction."

Rich: "It is, and I don’t think there’s anything wrong with that. If we were thinking every minute about this war, we’d take a gun to our heads, you know."