ABC's Gibson Discusses Media Bias on 'The View,' Behar Rants Against the GOP 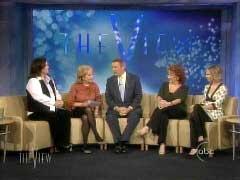 ABC World News anchor Charles Gibson visited the ladies of The View Wednesday morning to discuss a range of topics, from next week’s midterm election and John Kerry’s controversial remark to liberal media bias. Gibson argued that the controversy surrounding Senator Kerry’s recent statement that those who fail to make use of their education will end up "stuck in Iraq," was in reference to President Bush and that Republicans "grabbed" onto the statement to energize the GOP base. When asked by Elisabeth Hasselbeck about a perceived liberal bias in the media, fellow co-host Rosie O’Donnell laughed off the notion, while Gibson stated that balance is something he strives for:

Elisabeth Hasselbeck: "What do you think about the, the fact that a lot of people are talking about a media bias? You know, that they can see seventy-some odd percent of the news stories that come out have a liberal slant versus maybe twelve that, that have a more conservative slant? How do you respond to that?"

Rosie O’Donnell: "I would say that’s a Fox poll and I don’t think it’s accurate..."

Charles Gibson: "...There is no such thing as objectivity, there is just lesser degrees of subjectivity...And you have to, all the time, say to yourself, are we being fair? Are we being down the middle, as we can? And I simply can tell you that is something which, which I try to implant on everybody at World News."

The real fireworks on today’s chat fest, however, occurred prior to the segment with Gibson, between Hasselbeck, the View's token conservative, and liberal Joy Behar:

Before Gibson’s appearance on the program, the View women got into a heated dispute over this remark made by Senator John Kerry during a campaign speech, which they aired:

Senator John Kerry: "You know, education, if you make the most of it, and you study hard, and you do your homework, and you make an effort to be smart, you, you can do well. If you don't, you get stuck in Iraq."

Behar, who realized that Kerry’s comment could hurt Democratic candidates and energize Republican supporters, said Kerry "should put a sock in it," but then went on to spew more Daily Kos talking points:

Behar: " I also have to say that I feel very sad that John McCain and John Kerry are arguing and fighting over, over the support for the troops when both of them are veterans of Vietnam, and these draft dodgers, Bush, Rumsfeld and Cheney are making hay over this. America, wake up!"

Hasselbeck then chimed in, leading to this interesting exchange on Kerry, Bush and elitism:

Hasselbeck: "When I, when I heard him say that, I just, I just counted my blessing, it made me feel thankful that he, that John Kerry isn't the president of the United States. You know, that was a possibility. He’s so elitist, and he makes just, I think he just–"

Hasselbeck: "I believe he thinks he’s better than everybody else. And I, if he was talking about President Bush, and he was saying, if you did your homework, President Bush had a higher I.Q. than he does, and he also had better grades than he did."

Behar: "Well, they both went to Yale, they both had money. Why is Kerry an elitist and Bush not?"

Walters: "He just speaks good English, don’t pick at him for that."

When Walters moved on to ask whether Kerry’s remark would hurt the Democratic Party, Behar asserted that the Republicans would win if people were "stupid enough" to believe supporters of the war, which upset Hasselbeck greatly:

Behar: "Well, as long as the people who are against the Democrats are going to make hay out of this and lie about, about their record and, and go and continue to say that this war has been a good idea, when everybody knows its not been, then they're going to win. If people are stupid enough to believe that, then go ahead."

Behar: "I'm going out there now on a limb, Elisabeth–"

O’Donnell, who had remained silent throughout the debate, threw her two cents in and then acted as a quasi-moderator and allowed Behar and Hasselbeck one final comment

O’Donnell: "Here we go. Wait. Listen. I'm going to give you, just like I'm on ‘Crossfire,’ the closing comment and you a closing comment, and I would just like to say a startling fact. This is November 1st. In October, we lost the most American troops ever, 101 Americans–"

Behar: "Of our people. Our people! Our children!"

O’Donnell: "–who were killed in a civil war in another country that had nothing to do with 9/11, and that had no weapons of mass destruction. Final comment, Joy, and then Elisabeth."

Behar: "All these people who love this war, who don’t they send their husbands and children? Okay."

Behar: "Okay. That's not my final...I have one more thing to say. I just think they should stop changing the conversation. We are in the middle of a heinous war that is, that is destroying our country. It is splitting our country. Stop talking about gay marriage. I don't want to hear about gay marriage right now! I want to hear about this war. Stop it now."

O’Donnell: "And now, Elisabeth, you have a closing comment?"

Hasselbeck: "I think, I think when you go to the polls next week, I think you should choose to either fight the war on terror or fight Republicans. Pick your battle."

As noted earlier, Charles Gibson sat down with the co-hosts to discuss this issue, along with other political topics. The transcript of that interview follows below:

Barbara Walters: "The midterm elections are next week, may decide the future of America, although I think we've been deciding it today. And here to give us a blow by blow of the hottest political battles, is the anchor of ABC World News, I love him so, Charles Gibson. Please welcome, Charlie...So what we were talking about was, is this John Kerry's own problem or is this going to spill over on the Democrats?"

Charles Gibson: "Well, I think it’s a–first of all, it’s an interesting question I asked George Stephanopoulos last night on the air. I said, do you really think that John Kerry intended to denigrate the troops? Does the, does the White House really think that? And as George said, it doesn't make a difference. First of all, it's not in their interest to try to save John Kerry’s tush and secondly, they saw an issue and they grabbed it."

Walters: "But do you think he really meant to do that?"

Gibson: "I think he was talking about George Bush."

Gibson: "But it doesn’t make any difference. What its done is, it has, it is taken the argument back, which is probably advantageous to Republicans, for a Bush v. Kerry argument. And secondly, what is really important, I think to the Republicans and what they have been concerned about all along is, how do we energize our base? How do we get the base Republican voters to go to the polls? And they think they perhaps have found an issue here that, for at least a few days, will energize Republicans. But, but I think, essentially, and we've seen this in the polls over and over again that have been taken, and you could–I'm not talking about individual, are you going to vote for this guy or are you going to vote for that woman. I'm talking about the polls about where is the mood of the country, and, and I think there's no question, when you look at those polls, that the kind of discussion you just had on the air is going on over many dining room tables, over many–"

Walters: "Is this election then a referendum on, on Iraq or is it, as some people say, local issues?"

Walters: "No, you think it’s a referendum on the President and Iraq."

Gibson: "No, this is, this is–in, in race after race when you look at this, it is a referendum. It is the number one issue in people's minds, and when you look at the advertising and the way candidates are approaching this, Democrats are in, in district after district and state after state trying to tie the Republican candidate to the war and to George Bush, and they feel that will be effective for them. And the Republicans feel if they turn out their base that they can certainly hold the Senate, and perhaps even hold the House."

Behar: "This could all be meaningless if those voting machines are tampered with, which is really a problem that I'm having, this whole season–"

Elisabeth Hasselbeck: "You should get an absentee ballot."

Behar: "I'm very worried about that."

O’Donnell: "Charles, have you seen the documentary that's airing on HBO this week called Hacking Democracy, about those machines?"

Gibson: "It just drives me crazy."

Gibson: "It, it goes back to 2000. Electronically we ought to be able to do it. Theoretically, it seems to me, if you vote electronically, with a paper back-up, that it ought to be an accurate count. But in many of these areas, there won't be a, there won’t be a paper back-up. And, and so we actually have on Tuesday night a correspondent who is going to be devoted to, well, he's going to be in Ohio, and there’s a lot going on in Ohio, so he'll be looking at those races. This is Jake Tapper, but also will be looking at the problems with voting machines, to the extent that they may show up."

Hasselbeck: "...What do you think about the, the fact that lot of people are talking about a media bias? You know, that they can see seventy-some odd percent of the news stories that come out have a liberal slant versus maybe twelve that, that have a more conservative slant? How do you respond to that?"

O’Donnell: "I would say that’s a Fox poll and I don’t think it’s accurate, but--"

Gibson: "I, I always–I, I can't speak for everybody. I, the, the dictum which is foremost in my mind, and which is something that I try to carry around in the back of my mind like a little plaque, is something that David Brinkley used to say. There is no such thing as objectivity, there is just lesser degrees of subjectivity."

Hasselbeck: "I agree with that."

Gibson: "And you have to, all the time, say to yourself, are we being fair? Are we being down the middle, as we can. And I simply can tell you that is something which, which I try to implant on everybody at World News."

Behar: "Well, talk radio is very conservative, so it kind of balances itself out in the media, if that happens to be true, what you’re saying, which I doubt."

Gibson: "My, my concern, and there was an attempt at liberal talk radio recently with Air America."

Behar: "Oh, well that failed because they weren't entertaining enough."

Gibson: "Is there something about conservative talk radio that is inherently more entertaining than liberal talk radio?"

Behar: "I guess so, because it's more black and white."