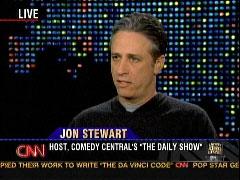 Jon Stewart, host of Comedy Central’s The Daily Show, used his February 27 appearance on Larry King Live to take some political jabs at the Bush administration. Stewart launched several attacks against the Bush White House, including his charge that the administration has "shown no real credibility."

Jon Stewart: "...My mind has been blown just so consistently by this administration’s insistence on their own competence without ever, sort of, delivering, kind of, any sort of evidence to that...They say trust us, everything’s fine. Yet, they’ve shown no real credibility."

In response to a question on the public’s reaction over the controversial deal between the U.S. and a United Arab Emirates-owned company to manage six American ports, Stewart went on the attack again:

Stewart: "I keep wondering what it takes to get fired from this administration. It seems like, literally, the worse you do, the bigger the medal you get."

The rest of Stewart’s liberal talking points are behind the cut.

Also regarding the ports deal, Stewart seemed to be channeling Senator Hillary Clinton’s remarks on Republicans "playing the fear card," when he stated:

Stewart: "...In America today, it’s as though somebody has stoked fear in this country. I don’t know who that might have been, but it appears that the country is poised to react, let’s say reflexively, with a certain xenophobic zeal."

Larry King: "But when you stoke fear, why then would you have the people you are saying to be fearful of run your ports?"

Stewart: "‘Cause you forgot you had stoked the fear...People are reacting to the way that this administration does their business, which is, I really feel like Bush just is like Santa. I know who’s naughty. I know who’s nice. You have no reason to pay attention. No, the Dubai guys are ok. These guys over here, they’re evildoers. These guys are ok. Don’t look into it."

During his appearance, Stewart made a ridiculous claim regarding the amount of power Democrats have in Washington, not once, but twice.

Stewart: "...When you look at, at the vote, how it breaks down it’s, you know, fifty-one percent for Bush, forty-nine percent for whoever the Democrat was, but the Democrats have only like two or three percent of the power."

Later in the hour, Stewart continued to whine:

Stewart: "I’m leaving the Democrats out because I honestly don’t feel that they make an impact. They have forty-nine percent of the vote and three percent of the power. At a certain point you go, guys, pick up your game."

It will be interesting to what extent Stewart brings these sentiments with him when he hosts the Academy Awards on March 5, in front of what, no doubt, will be a very receptive audience.