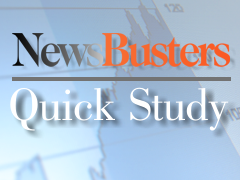 Now that the dust has settled on both parties' vice presidential picks, it's time to take a look at how the media treated Joe Biden and Sarah Palin in the crucial early hours after they were announced as running mates.

This analysis is the first of several "Quick Study" reports we'll be running this election season to give a snapshot of press coverage, primarily through the lens of cable television.

Looking at the transcripts of CNN, FNC, and MSNBC during the two "primetime" hours of the day John McCain and Barack Obama announced their running mates, a trend becomes quite clear: The media were much more likely to report negative information about the Alaskan Palin than the Delawarean Biden.

Perhaps unsurprisingly given its decision to market itself as the network of the far left, MSNBC was the most unfair of the cable news channels. After Democrats learned Biden would be their vice presidential nominee August 23rd, MSNBC aired 47 positive statements about Obama's running mate. The network aired just 4 about Sara Palin when she was announced August 29th, making it 12 times more likely to praise Biden than Palin.

MSNBC skewed leftward when it came to negative information about McCain's running mate. It aired 20 negative statements about Palin and 14 about Biden.

As for CNN, while the first cable news channel was not as effusive in its praise of Biden as MSNBC (the network aired 29 positive statements about the Democrat versus 15 about Palin), it actually outstripped MSNBC in attacking Sarah Palin.

Particularly notable in the negativity department for CNN was Campbell Brown who repeatedly slammed Palin, making a point to question her experience as she did just after 8pm on August 29th:

Political insiders were pretty impressed when there was all this talk about who was on McCain's short list of vp candidates. Most pretty well-known Republicans, but he didn't choose any of them. Instead everybody now getting to know Alaska Governor Sarah Palin tonight. Some are calling this a pretty risky move by Senator McCain.

John McCain has said that he would pick a running mate who would be able to step into the president's shoes on day one. I don't have to tell you, Sarah Palin's only been governor for less than two years. Of all the Republicans out there, is she really the most qualified person to be commander in chief in a crisis?

"So much of your campaign's case against Senator Obama has focused on how little time that he's been in the Senate and how inexperienced he is on matters of international affairs, on military affairs. I mean, doesn't naming Governor Palin as his running mate undermine your entire argument against Senator Obama?" she asked McCain strategist Michael Duhaime.

Brown continued her negativity this week, getting into a verbal spat with GOP strategist Tucker Bounds which was so notable, it caught the attention of McCain himself who canceled an interview with Brown's CNN colleague Larry King over the incident. She hardly appears to be alone as a quick glance at the NewsBusters home page shows.