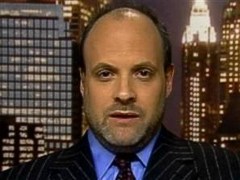 Howard Wolfson has become the latest prominent Democrat to join forces with Fox News Channel during the general election, hailing it for its "comprehensive and fair and evenhanded" coverage during the primaries.

That's quite an endorsement coming from one of the Democratic party's biggest communications mavens, and not one known for being especially soft-gloved. It's the equivalent of MSNBC suddenly getting endorsed by the likes of Mary Matalin or Ari Fleischer, something which is far less likely to happen. New York Times reporter Jim Rutenberg broke the story:

Howard Wolfson, who was a top strategist for the presidential campaign of Senator Hillary Rodham Clinton, is going where some Democrats were unwilling to go during the early days of the election season: the Fox News Channel. [...]

Mr. Wolfson is joining a network that Democrats shunned for a time, complaining that its coverage was unfair. But aides to Mrs. Clinton came to view Fox News as distinctly fair to her in a news media climate that they believed favored Senator Barack Obama.

“I thought that Fox’s coverage during the primary was comprehensive and fair and evenhanded,” Mr. Wolfson said Monday in a telephone interview from Liverpool, England, where he was vacationing. “It’s a huge audience, and it is important to have a strong, progressive voice on the network.” [...]

Mr. Wolfson’s decision to join Fox represents a general feeling among Clinton partisans that the network treated her more fairly than did other networks it viewed as overly friendly to Mr. Obama.

The night Mrs. Clinton won the Pennsylvania primary, several months after Mrs. Clinton joined other Democrats in opting out of a debate that Fox News was to sponsor, her campaign chairman Terry McAuliffe declared live on Fox, “Fair and Balanced Fox!” (The network was first to declare her the victor that night.) Last month the network signed Lanny Davis, a former special counsel to Bill Clinton and a vocal support of Mrs. Clinton, as a contributor.

The list of FNC Democrats continues to grow. One thing that is notable about this trend is that, in contrast to the resident conservatives at CNN and MSNBC, Fox's liberals like Wolfson, Davis, and Susan Estrich, generally tend to be more "on-message" than CNN's and MSNBC's conservatives such as Tucker Carlson, Joe Scarborough, and Amy Holmes.