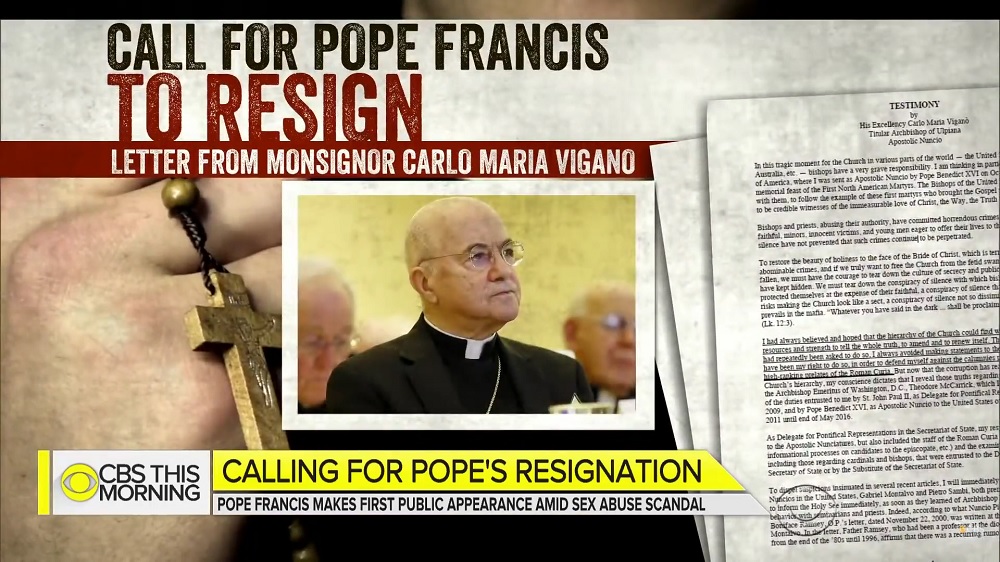 The Washington Post followed the example of AP and The New York Times with a Thursday article that played up the role of conservative Catholics in a controversy involving a former Vatican diplomat's recent "testimony" against Pope Francis.

Long-time Post religioin reporter Michelle Boorstein narrowed her scope and focused exclusively on the involvement of an "influential...conservative Catholic" media in the issue. Boorstein emphasized that "conservative Catholic media outlets have become power players by conveying the anti-Francis point of view." She also zeroed in on the role of "powerful Italian conservatives" in breaking the story.

The correspondent used the "conservative" term a total of 30 times in her write-up. (For a contrast, see Boorstein on April 5, in which she couldn't find a liberal/leftist label for Vermont ice cream barons Ben & Jerry, or "Black Lives Matters supporter DeRay McKesson," or the socialists at Sojourners magazine.)

Boorstein first noted that the "news this week that Catholic journalists were involved in editing and distributing a Vatican diplomat’s explosive and largely unverified letter calling for the pope’s resignation reveals an influential and tightly knit conservative Catholic digital media network that’s been particularly active during the tenure of its nemesis, Pope Francis." She soon added that the reporting from these conservative "power players" were akin to "the way in which Breitbart News and Drudge Report have served as media conduits for the brand of conservative American populism led by President Trump."

If the Post can easily identify how a "tight-knit" ideological network can unite to remove a powerful leader, certainly they can understand how conservatives see them and their fellow liberal 'power players' at 'media conduits.'

Boorstein continued by pointing out the involvement of Italian Catholic blogger Aldo Maria Valli, who met with Archbishop Carlo Maria Viganò before the former papal diplomat released his document. She underlined that "Valli was only one star in the constellation of conservative Catholic media who reportedly were part of the process of getting out the 11-page letter." After summarizing how another Italian journalist helped the archbishop edit the "testimony," the Washington Post journalist detailed how an American-based Catholic outlet published the document. She likened a key figure connected to this outlet to controversial siblings involved in right-of-center politics in the U.S.

Viganò ultimately distributed his letter through a handful of conservative Catholic sites, including the [National Catholic] Register, which is owned by the Alabama-based conglomerate EWTN, the Eternal Word Television Network. EWTN runs 11 round-the-clock networks that reach 270 million homes in 145 countries, according to its website. EWTN was launched in the early 1980s by nun-magnate Mother Angelica, who was a media visionary committed to promoting traditional social values.

This week, the New York Times reported that, two weeks ago, Viganò shared his plan with Timothy Busch, a Koch Brothers-like figure in conservative Catholic circles who sits on the board of EWTN....

Several paragraphs later, the correspondent quoted from John Thavis, whom she described as the former Rome "bureau chief of the Catholic News Service." Thavis claimed that "a lot of the smaller Catholic organizations take a conservative line, perhaps reflecting the church politics of their financial backers." She didn't disclose, however, that CNS is operated by the United States Conference of Catholic Bishops, the main organizing body of the American Catholic hierarchy.

It should also be pointed out that Thavis ripped the bishops who sided with Archbishop Viganò in a Wednesday post on Twitter: "I find it odd that none of them seem bothered by the character assassination in his letter, or his obsession with eradicating 'homosexual networks,' or the fact that he calls the pope a propagator of evil." He also gave possible hints of his own by bias by re-Tweeting articles from pro-LGBT Fr. James Martin and the notoriously heterodox National Catholic Reporter on Thursday.

Boorstein also returned to the subject of Busch by noting that he "not only sits on the board of EWTN and many other Catholic organizations but is also the namesake for the business school at Catholic University, a graduate school known for working to reconcile free markets and capitalism and Catholic teaching." To her credit, she added that "Francis...is more in the socialist model of Catholicism."

Near the end of her article, the Washington Post journalist highlighted that "conservative Catholic outlets have stirred the pot before Viganò. A year ago, Catholic University's Theological College seminary canceled an appearance by the liberal Jesuit James Martin, a prominent advocate for the acceptance of LGBT people, citing 'increasing negative feedback from various social media sites.'"

PS: On Thursday, Reuters published a report that, like Boorstein, hyed the involvement of conservative Catholic media outlets in the Viganò controversy. Correspondent Philip Pullella didn't use the "conservative" label to the same extent as his counterpart at the Post (a mere 11 times). He did include a quote from an anonymous "senior Vatican prelate," who trumpeted that "the conservatives have declared war and they are convinced they can reform the Church with a frontal attack."

Pullella also cited Fordham University's David Gibson, who echoed a claim from Boorstein: "It’s very reminiscent of what is going on in conservative politics in the United States. It's the same playbook." However, the Reuters correspondent never mentioned that Gibson is a former reporter for Religion News Service. During his time with the outlet, the academic had a record of bias towards the left. Pullella concluded his report with two quotes from Columbia University Professor Alexander Stille, who also attacked conservatives.