Networks Punt on Bombing Plot Against Confederate Monument in Houston 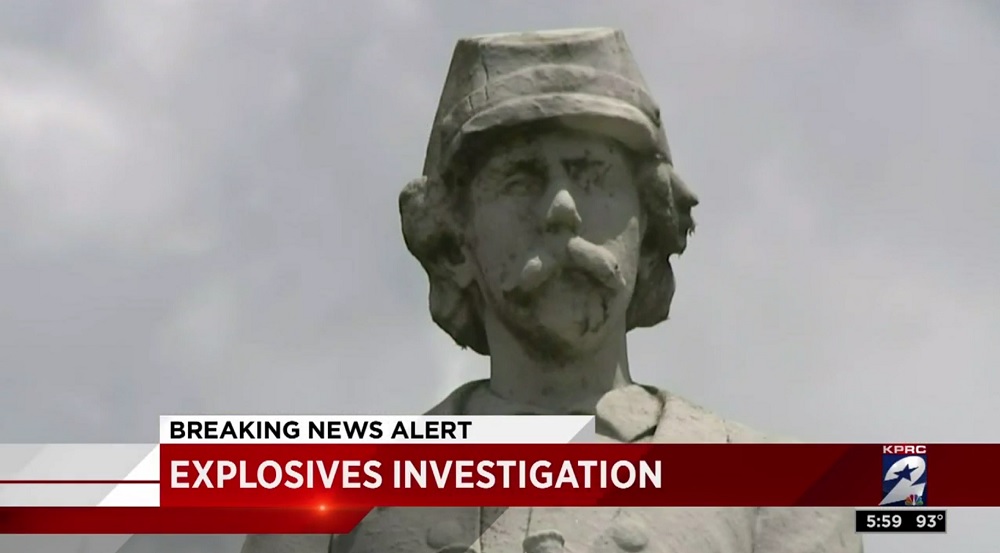 ABC, CBS, and NBC's evening newscasts on Monday all failed to cover the thwarted bombing of a Confederate monument in Houston, Texas. The Big Three networks led and concluded each program with full reports on the solar eclipse that crossed the United States, but didn't even set aside a news brief to the arrest of Andrew Cecil Schneck, who allegedly prepared explosives and tried to set them off near the Texas landmark. CNN and MSNBC also punted on covering the FBI's investigation of the bomb plot, while Fox News aired an eleven-second news brief on Monday evening [video below].

Correspondents Daniel Arkin and Tracy Connor covered Schneck's arrest in a Monday afternoon article on NBCNews.com. The pair disclosed that a park ranger found the suspect "kneeling in the bushes near the statue of Richard Dowling, a commander in the Confederate army" in Hermann Park, one of the most-visited public spaces in Houston. According to a court document, the law enforcement officer "observed Schneck to be holding two small boxes with various items inside," including "what appeared to be duct tape and wires." During the arrest, the ranger asked Schneck "whether he wanted to harm the Dowling statue...[He] replied that he did not 'like that guy.'"

The NBC journalists' online coverage of Schneck's alleged bomb plot apparently didn't warrant any on-air coverage on NBC Nightly News or MSNBC's late afternoon and evening programming. By contrast, anchor Eboni Williams zeroed in on the story during the eleven-second news brief on The Fox News Specialists: "Highlighting the intensity of the controversy, federal officials announced today that a 25-year-old man has been arrested after attempting to blow up a statue of Confederate officer Richard Dowling on Saturday night."

The City of Houston's website includes a short description of the Richard Dowling monument. It had been dedicated in 1905 in honor of the Civil War veteran, who led Confederate troops to victory at the Second Battle of Sabine Pass, which lies on the border between Texas and Louisiana. Dowling was "hailed as a war hero in Houston, and the end of the war saw him resume his successful business career. Yellow fever took his life in 1867."

NBC's Houston affiliate, KPRC-TV, also gave additional details on Schneck's arrest in a Monday write-up. Initial tests of the suspect's device found that device contained "most likely nitroglycerin and hexamethylene triperoxide diamine." A criminal complaint against Schneck outlined that the latter susbstance is a "high explosive organic compound used as an initiating, or primary explosive." After summarizing his criminal history, the KPRC article noted that "if convicted for Saturday's incident, Schneck faces a minimum of five to 40 years in federal prison and a possible $250,000 fine."