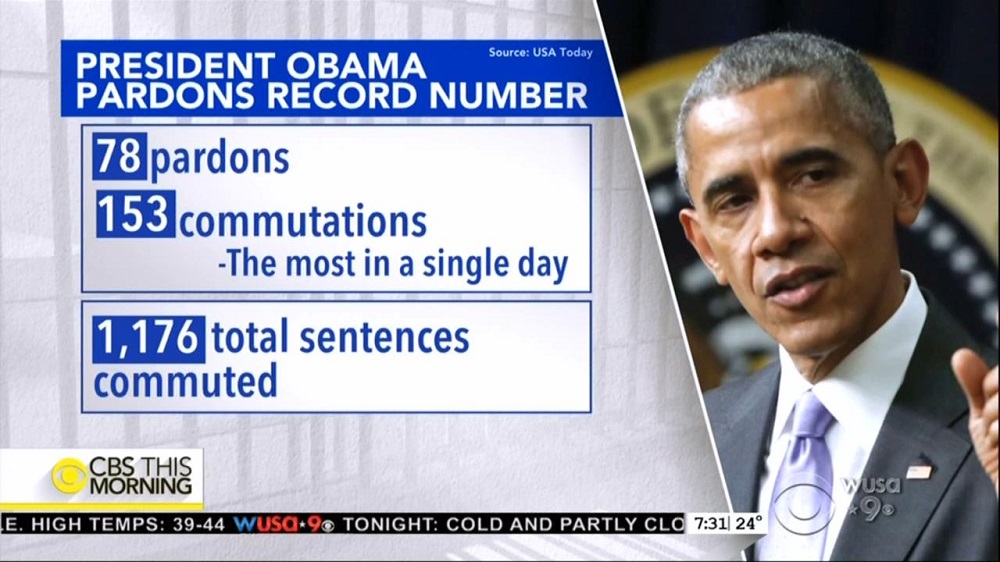 None of the Big Three networks' Monday evening newscasts, nor ABC and NBC's morning shows on Tuesday, covered how President Obama set a one-day record for pardons and commutations on Monday. ABC's Good Morning America on Tuesday apparently thought Merriam-Webster's 2016 'Word of the Year' more important, as it devoted 45 seconds of air time to that story. The same morning, NBC's Today also didn't cover the pardons record, but set aside a minute and 23 seconds to a help line for the board game Monopoly in the United Kingdom.

Anchor Norah O'Donnell gave the only Big Three coverage of President Obama's record on Tuesday's CBS This Morning. O'Donnell read a 25-second news brief on the presidential pardons and commutations:

NORAH O'DONNELL: USA Today reports that President Obama set a presidential clemency record. The President pardoned 78 people yesterday, and commuted the sentences of another 153 federal inmates. That is the most ever granted by a president in one day. The President has ordered 1,176 commutations in all — mostly, for low-level drug offenders. More than half of those prisoners have been freed in the past year.

It should be pointed out that, as of late Tuesday morning, all three cable news networks have covered the story. Fox News Channel spotlighted the pardons on Monday evening's Special Report. MSNBC mentioned them on Tuesday's MSNBC Live. CNN arrived last on the development, with a passing reference on Tuesday's At This Hour.

President Barack Obama on Monday granted clemency to 231 individuals, the largest single day act of his presidency and totaling 1,324 total while in office.

Obama granted 153 commutations, bringing the total number of commutations while he's been in office to 1,176, including 395 life sentences.

A majority of the commutations involved drug related charges.

Obama also granted pardons to 78 individuals, doubling his previous number of pardons for a total of 148.

White House Counsel Neil Eggleston said Monday that he expects Obama will issue even more grants of commutations and pardons before leaving office....

Malloy later pointed out how "sentence reform advocates feel a sense of urgency because they doubt the Trump administration will continue Obama's initiative to provide relief to nonviolent drug offenders, some of whom are serving four or more times the sentence they would receive today, according to administration officials."