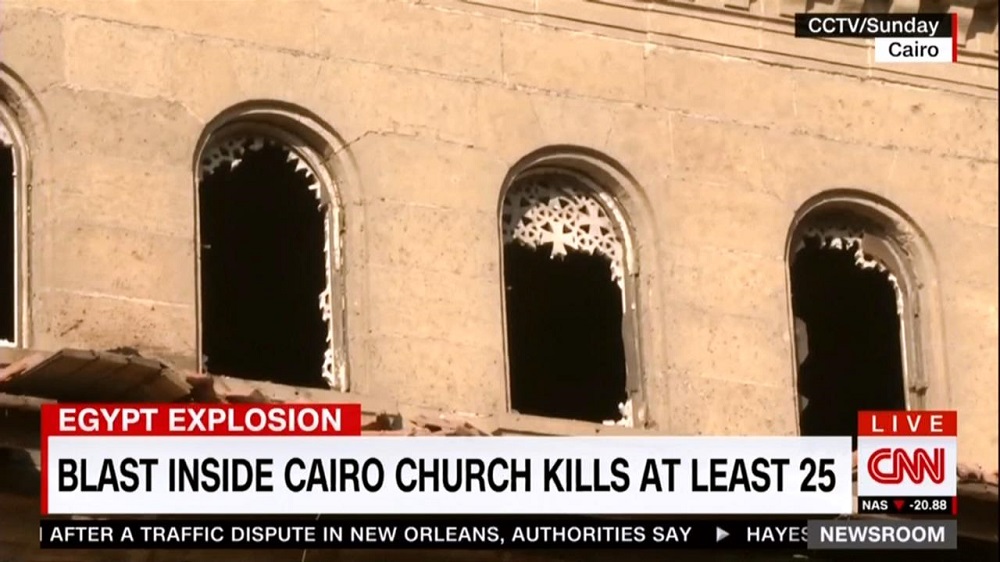 As of Monday morning, NBC's Today and CNN's New Day have yet to cover the deadly terrorist attack on a Coptic Christian church in Cairo, Egypt on Sunday. The NBC morning newscast's omission is particularly conspicuous, as Sunday's NBC Nightly News devoted a full report to the bombing. CBS's Sunday Morning gave the attack a one-sentence mention on December 11, 2016. However, CBS This Morning didn't cover it on Monday. ABC's Good Morning America mentioned the anti-Christian bombing in passing on Sunday, but didn't report on it on Monday.

The CNN morning show's failure to cover the terrorist attack also sticks out, as the early morning program that airs before it, Early Start, aired a two-minute-long full report on the story on Monday. Anchor Carol Costello also devoted a news brief to the deadly explosion during the 9 am Eastern hour of CNN Newsroom, which follows New Day: [video from CNN and NBC below]

CAROL COSTELLO: In Cairo, Egypt, the first funeral services [are] now being held, after a suicide bomber killed dozens inside a Coptic Christian church. The blast happened during a worship service Sunday morning — ripping through a section of the church for women. At least 25 parishioners died; nearly 50 others were injured. Egypt's president says three men and a woman have been arrested.

Costello also mentioned the bombing during a lead-in to a segment on the twin bombings in Istanbul, Turkey during the 10 am Eastern hour of the program.

It should be pointed out that instead of covering the terrorist attack, NBC's Today devoted almost four minutes of air time to the controversy surrounding author Sara Gruen, who purchased a large quantity of a popular children's toy. ABC's GMA stood out as the only Big Three morning show to cover the bombing on Sunday. However, the following morning, the newscast ignored the international news, and set aside 47 seconds to President Obama and actor Bill Murray putting golf balls in the Oval Office.

The full transcript of correspondent Matt Bradley's report on the terrorist attack in Egypt from NBC Nightly News on December 11, 2016:

KATE SNOW: Overseas, horrific scenes today in Egypt, where a bombing at Cairo's largest Christian cathedral left at least 25 people dead and wounded almost 50 — many of them women and children attending Sunday Mass. It comes as Egypt deals with increasing sectarian tensions.

We get more tonight from NBC's Matt Bradley.

MATT BRADLEY (voice-over): Wails of grief turned to shouts of outrage — a bombing that tore through a crowded Sunday morning Mass in Cairo left at least two dozen dead; dozens more injured; and a church adjacent to the iconic St. Mark's Cathedral broken and bloodied. The symbolism lost on no one. This is the most important church complex for the Middle East's largest Christian minority. And with Christians under fire across the region, many here feel neglected by the very regime that claims to protect them. (clip of woman shouting in foreign language) This woman screams at a local official, 'Is it okay that the church was hit?'

This is the second such attack in three days. A blast at a security checkpoint on Friday killed six police officers. Jihadists claimed responsibility. Today's bombing has, so far, gone unclaimed. Suspicion will likely fall on the Muslim Brotherhood, the Islamist group President [Abdel] Sisi deposed in 2013. At a rally shortly after the attack, a crowd chant slogans rarely heard since Egypt's revolution: 'The people want the downfall of the regime' — a bad omen for a president who rose to power on the exact same slogan. Matt Bradley, NBC News.