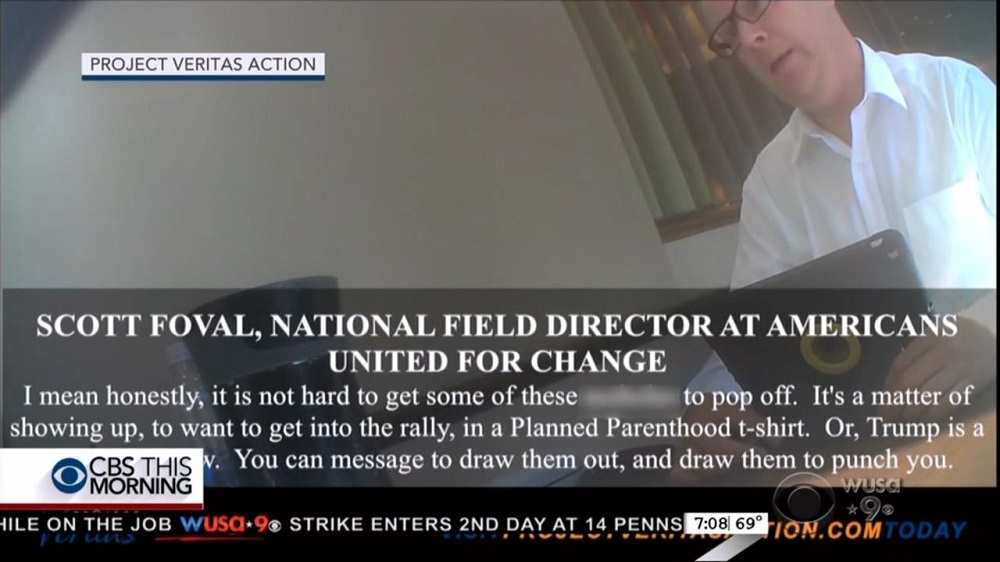 Thursday's CBS This Morning was the first Big Three newscast to notice the latest Project Veritas undercover videos that exposed how Democratic Party operatives worked to disrupt Donald Trump rallies. During a fact check of Wednesday's presidential debate, Nancy Cordes spotlighted how "Democratic contractors were caught on video appearing to plan to provoke Trump supporters." [video below] ABC and NBC's morning and evening newscasts have yet to cover the controversy. Instead, NBC's Today on Wednesday devoted 33 seconds to a North Korean smoking chimpanzee. ABC's GMA on Wednesday set aside over a minute to possible new music from John Mayer.

Cordes zeroed in on the Project Veritas revelation during the two minute and 34-second segment. She first pointed out that "Trump accused Clinton last night of hiring people to disrupt his rallies." After playing a clip of the billionaire's statement, the journalist continued with her line about "Democratic contractors...appearing to plan to provoke Trump supporters." She added that "there's no indication Clinton's campaign paid for it or even knew about it."

This doesn't tell the whole story, however. Two of the "contractors," as Cordes put it, who appeared in the undercover videos, had to step down from their positions after their release. The first, Scott Foval, worked for a group called Americans United for Change. In one of the videos, Foval disclosed that "the [Hillary Clinton] campaign pays DNC, DNC pays Democracy Partners, Democracy Partners pays the Foval Group, the Foval Group goes and executes the (expletive deleted) on the ground" — meaning, the provocation of the Trump supporters at the rallies. So, contrary to Cordes's reporting, the Clinton campaign indirectly paid for the incitement.

The other Democratic operative who resigned — Robert Creamer — worked for the organization Democracy Partners; and was, according to a CNN report on Tuesday, "helping the Democratic National Committee with Clinton's campaign." In his statement, Creamer, who is married to Illinois Congresswoman Jan Schakowsky, outlined that he was "unwilling to become a distraction to the important task of electing Hilary Clinton...As a result I have indicated to the Democratic National Committee that I am stepping back from my responsibilities working with the campaign." The CNN report also highlighted that Creamer "confirmed that he was referring to the Clinton campaign, with which he was 'fully integrated.'"

The full transcript of Nancy Cordes's report from the October 20, 2016 edition of CBS This Morning:

NORAH O'DONNELL: We saw the candidates challenge each other's ideas throughout the debate, but some of the claims on both sides were off the mark. Nancy Cordes is in the debate spin room to do some fact checking — starting with Donald Trump. Nancy, good morning.

NANCY CORDES: Good morning. Well, for the third debate in a row, Donald Trump expressed doubt that Russians are behind the recent hackings of Democratic groups. That put him at odds — not just with Clinton, but with the entire U.S. intelligence community.

DONALD TRUMP, (R), PRESIDENTIAL NOMINEE (from presidential debate): She has no idea whether it's Russia, China, or anybody else—

HILLARY CLINTON, (D), PRESIDENTIAL NOMINEE: You take a stand, because — I am not—

TRUMP: Hillary, you have no idea—

CLINTON: Seventeen — seventeen — do you doubt 17—

TRUMP: Our — our country has no idea—

CORDES (voice-over): In this case, Clinton had it right. Two weeks ago, the U.S. intelligence community announced it is confident that the Russian government directed the recent compromises of e-mails.

On the issue of immigration—

CLINTON: I voted for border security, and there are—

TRUMP: And the wall—

CORDES: We rate Trump's claim as partially true. As senator, Clinton did vote for a bill to build 700 miles of fencing along parts of the 2,000-mile southern border; but not a massive wall, as Trump has proposed.

TRUMP: She's the one — and Obama — that caused the violence.

CORDES: The truth on that score is unclear. Democratic contractors were caught on video appearing to plan to provoke Trump supporters; but there's no indication Clinton's campaign paid for it or even knew about it.

As in previous debates, Trump denied making some controversial comments that are immortalized on video.

CLINTON: He said that he could not possibly have done those things to those women, because they were not attractive enough for them to be assaulted—

TRUMP (from campaign rally): Believe me: she would not be my first choice — that I can tell you.

CLINTON (from presidential debate): He also went after a disabled reporter — mocked and mimicked him on national television—

CORDES (on-camera): Clinton argued last night that her proposals on infrastructure, education, wouldn't add a penny to the national debt. But an independent analysis finds that that's false — that she would actually add about $200 billion to the debt over ten years. Gayle, they say that's still far less than Trump, who would add 5.3 trillion [dollars] to the debt over that same time period.

GAYLE KING: All right. That is a big difference. Thank you very much, Nancy.