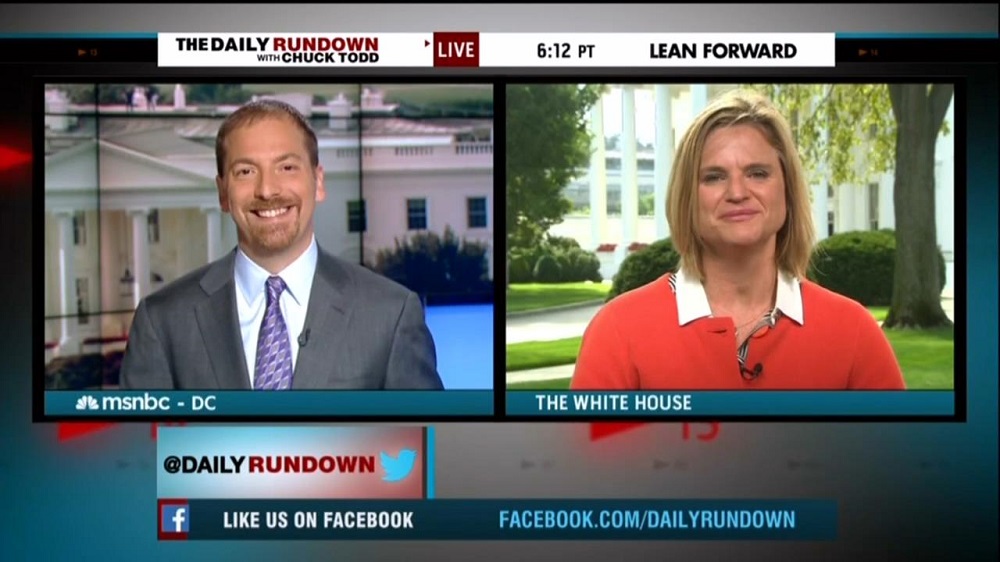 On Monday, Chuck Ross of The Daily Caller blog spotlighted NBC's Chuck Todd and his wife's apparently cozy relationship with Hillary Clinton's campaign communication director, Jennifer Palmieri. The Todds sent out invitations for a September 2015 event at their house honoring Palmieri and her husband, Jim Lyons. The couple included the Clinton flack's supervisor, campaign chairman John Podesta, as disclosed in one of the e-mails released by Wikileaks. Of course, just days earlier, WikiLeaks published other Podesta e-mails that revealed Palmieri and her associates' low opinions of Catholic and evangelical Christians.

Ross noted in his item that "an invitation for the shindig was sent on July 11, 2015 to John Podesta, Clinton's campaign chairman.." He also pointed that "Todd's wife, Kristian...was at that time a consultant for former Virginia Sen. Jim Webb, one of Hillary Clinton's challengers."

This isn't the first Podesta e-mail that revealed a Todd connection to Palmieri. Earlier in 2015, the Clinton campaign communication director bewailed a supposedly "outrageous" interview that NBC's Cynthia McFadden conducted with Bill Clinton (in reality, it was a softball segment). Palmieri sent an e-mail to her associates underlining that she had "called Chuck Todd (as head of political unit) to let him know how outrageous and ludicrous this was and that our side of the house is watching to see how NBC handles this."

Back in 2014, Palmieri appeared on Todd's MSNBC show at the time, The Daily Rundown, in her previous role as the Obama White House communications director. The host was about to leave to become the host of NBC's Meet the Press, so the guest had some very kind parting words for him [video below]:

JENNIFER PALMIERI, WHITE HOUSE DIR. OF COMMUNICATIONS: I know! Oh, yeah — as you know, it's — it's a show I'm a big fan of; and — you know, and all the work that your team does, too. You guys are pretty smart, pretty professional — a lot of good research. It's good stuff—

TODD: Well, the staff — the staff deserves a lot more credit than I do; so Jennifer Palmieri, thanks very much.