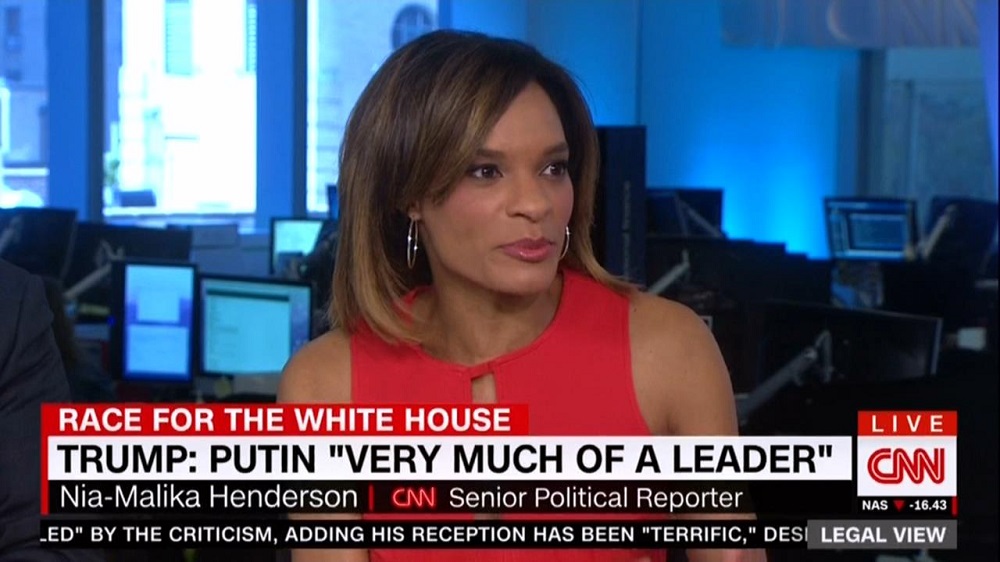 On Thursday's Legal View, two CNN journalists played up Hillary Clinton's first press conference in many months. Ashleigh Banfield trumpeted how "Republicans can no longer say, 270-some-odd days since Hillary held a news conference. There is some real strategy to this." Nia-Malika Henderson touted that the presser was a "really smart shift for her....she's able to drive the narrative — drive the conversation." [video below]

Banfield raised the former first lady's encounter with the press midway through a panel discussion segment with Henderson and Reliable Sources host Brian Stelter. The anchor noted that Mrs. Clinton was "doing the gaggle....and I have a question for you about the television nature of this...she talks to the press — holding an actual press conference with an actual podium, answering actual questions." She continued with her line about Republicans losing their talking point and the "real strategy" of this move.

Stelter replied with some criticism for the Democratic presidential nominee: "Suddenly, the media is convenient for Hillary Clinton....I think what she was doing today was having the last word after the forum. Remember, she spoke first at the forum; then, Donald Trump....Her performance at the forum left a lot to be desired. So, she tried to change the topic this morning — make it all about Trump." Henderson then chimed in with her "really smart shift" statement about Mrs. Clinton.

Earlier in the segment, Banfield harped on Donald Trump's latest praise for Russian President Vladimir Putin, where he also took a shot at President Obama: "'Far more than our president has been a leader' — look, that's the kind of thing that makes people go, what!? Did he really? Oh, my — but you know something? His supporters like the fact that he makes them say, what? Really? Good!"

The transcript of the relevant portion of the panel discussion segment from CNN's Legal View With Ashleigh Banfield on September 8, 2016:

ASHLEIGH BANFIELD: Nia-Malika, I'm going to start with you on this whole Putin business. Just in case anybody went to bed early last night and, maybe, missed what Donald Trump said about Vladimir Putin, I just want to replay what it was Hillary Clinton was just referring to. What it was that made her invoke Ronald Reagan's name, as though he were spinning in his grave over hearing Donald Trump talk about Vladimir Putin. Here's what Donald Trump said last night.

DONALD TRUMP (R), PRESIDENTIAL NOMINEE (from MSNBC presidential forum): If he says great things about me, I'm going the say great things about him. I've already said he is really very much of a leader. I mean, you can say, oh, isn't that a terrible thing? He called the man — the man has very strong control over a country.

Now, it's a very different system, and I don't happen to like the system, But certainly, in that system, he's been a leader — far more than our president has been a leader.

BANFIELD: 'Far more than our president has been a leader' — look, that's the kind of thing that makes people go, what!?

BANFIELD: Did he really?

BANFIELD: Oh, my — but you know something? His supporters like the fact that he makes them say, what? Really? Good!

HENDERSON: Yeah. I think that's right. And, you know, it would be surprising, in some ways, if we hadn't heard this kind of language from Donald Trump about Putin before. They have something of a bromance. (Stelter laughs) He, at one point, said that he had — he'd met — met him at some point. Apparently, they haven't really met—

HENDERSON: So, there is this sort of mutual admiration society—

BANFIELD: They both were on the same '60 Minutes' episode—

HENDERSON: Which, I guess, counts as a meeting in some sort of way—

BANFIELD: But they weren't in the same country—

STELTER: Which is a great example of how his—

STELTER: I think we, in the media, take him more literally sometimes than his supporters do.

BANFIELD: So do a lot of foreign leaders — if you're in the White House, they take you literally. That's, I think, the issue that Hillary Clinton has — and when she was on the tarmac this morning doing the gaggle—

BANFIELD: She was parsing almost item by item—

BANFIELD: And I have a question for you about the television nature of this — here she is walking out before she gets on the plane in White Plains, New York — and she talks to the press — holding an actual press conference with an actual podium (Henderson and Stelter laugh), answering actual questions. The Republicans can no longer say, 270-some-odd days since Hillary held a news conference. There is some — there is some real strategy to this in—

BANFIELD: In how this looks; and how it appears to Trump supporters, as well as Hillary Clinton supporters.

STELTER: Suddenly, the media is convenient for Hillary Clinton. She wants to have these press conferences. She's had a couple of informal ones on her plane this week as well.

I think what she was doing today was having the last word after the forum. Remember, she spoke first at the forum; then, Donald Trump; so Trump, sort of, had the last word. She was able to then come out this morning and restart this conversation—

Her performance at the forum left a lot to be desired. So, she tried to change the topic this morning — make it all about Trump — which is, really, this entire election in a nutshell, right? Whoever we're talking about is the loser—

STELTER: Whoever we're not talking about is the winner.

HENDERSON: And it's this really smart shift for her. I mean, it was, sort of, a last word — you're right — and the first word. So she's able to drive the narrative — drive the conversation.