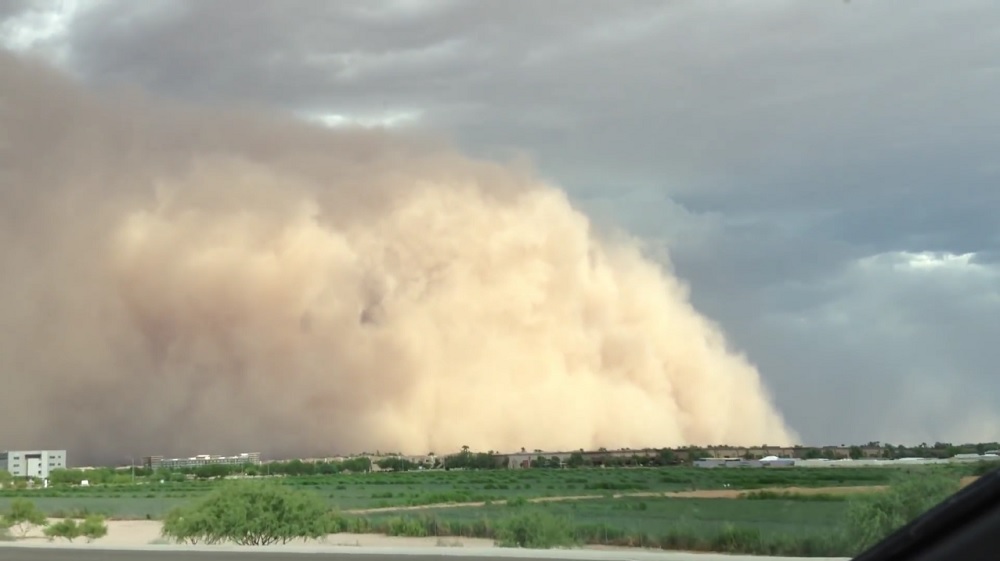 Jason Samenow spotlighted how "the meteorological term 'haboob,' a word with Arabic roots, didn't sit well with some residents" around Lubbock, Texas in a Tuesday item for The Washington Post's Capital Weather Gang blog. Samenow underlined that the National Weather Service's "use of 'haboob' was entirely appropriate," and played up how "on Facebook, a number of readers posted strongly worded retorts to those who posted complaints about the Weather Service's use of the term." The writer touted Facebook users who called those who objected "ignorant," "stupid," and "super annoying to the civilized world."

Samenow led his article, "Arabic weather term 'haboob' is apparently troubling for some Texans," by noting how "a wall of dust raced toward Lubbock, Tex., on Sunday, and the National Weather Service threw out a word of caution on its Facebook page. 'A haboob is rapidly approaching the Lubbock airport and may affect the city as well,' the meteorologists wrote." He continued with by quoting two negative online reactions to the use of the term:

Haboob!?! I'm a Texan. Not a foreigner from Iraq or Afghanistan. They might have haboobs but around here in the Panhandle of TEXAS, we have Dust Storms.....

In Texas, nimrod, this is called a sandstorm. We've had them for years! If you would like to move to the Middle East you can call this a haboob. While you reside here, call it a sandstorm.

The Washington Post weather editor then gave his "entirely appropriate" remark about the term, and described the weather conditions that cause a haboob: "It describes a situation in which a collapsing thunderstorm exhales a burst of wind. This burst of wind, or outflow, collects dust in the surrounding arid environment. The dust can grow into a towering dark cloud, the so-called haboob, that sweeps across the landscape, cutting visibility to near zero."

Samenow further underlined that "it's also true that many weather and Earth science terms we use are derived from other languages," and cited hurricane, tornado, and derecho as examples. He condescendingly added, "In fact, there is very little in the English language that doesn't have roots somewhere else in the world."

The editor later quoted meteorologist Bob Henson's Tuesday article on the Weather Underground website, who explained the difference between haboobs and larger dust/sand storms. He also cited how Henson pointed out that "'haboob' is hardly a new term in the meteorological literature." However, Samenow left out that the Weather Underground expert disclosed that haboob is a "once-obscure term" that has "only recently made it into public discourse."

Henson also correctly pointed out the influence of online/social media in the usage of the popularization of such scientific terms:

"...[W]ith their adoption of Twitter and Facebook, NWS offices now have a direct line to the public, together with the ability to introduce semi-technical terms that otherwise might not have made it through the filter of mass media. The ascent of online media has also made it more tempting for journalists and pundits to coin or promulgate terms that have a chance of going viral. Already, the age of social and online media has popularized 'polar vortex,' 'derecho,' and several others."

Samenow later summarized how "objections to the use of haboob are not unique to Texas," and noted how the New York Times covered a previous "uproar" in Arizona over the use of "haboob" in 2011. He underlined that "the actions of a few shouldn't color all Texans and Arizonans as prejudiced." However, his article — especially the final paragraphs — forwarded the left-of-center stereotype about many conservative Texans and Arizonans:

...The [2011] Times [article] quoted David Wilson of Goodyear, Ariz., who said: "Let's not become so 'xenophobic' that we forget to remember that we are citizens of the world, nor fail to recognize the contributions of all cultures to the richness of our language."

Meanwhile, on Facebook, a number of readers posted strongly worded retorts to those who posted complaints about the Weather Service's use of the term in Lubbock:

Reader Trent Spencer said: "I keep forgetting how ignorant the people of the Panhandle can be."

And Charles Russell added: "To all of you people complaining about a word. Do you all realize how stupid y'all look? I mean, the rest of the country and the world is laughing at y'all. …  [S]top getting offended over nothing. It's super annoying to the civilized world."