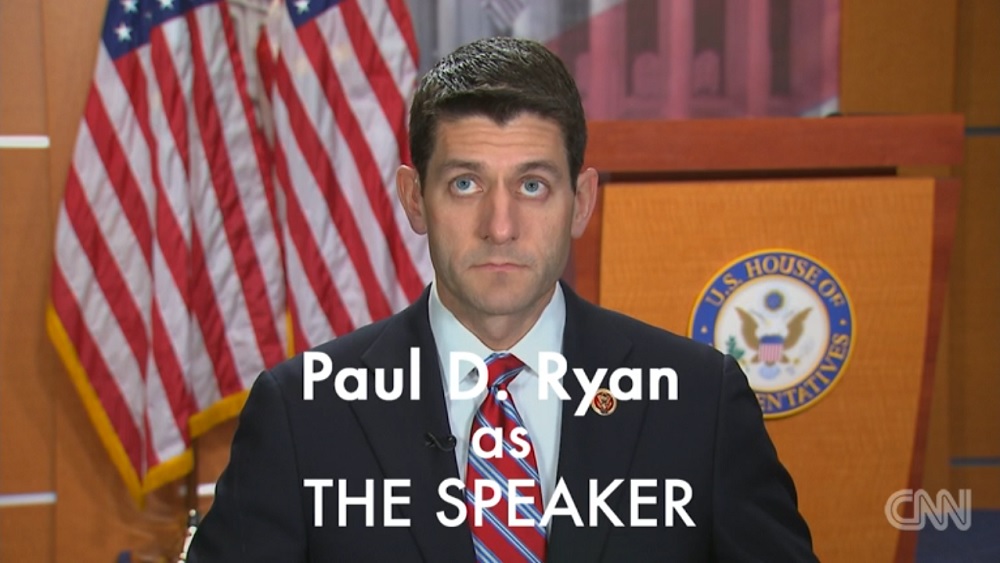 On Monday, CNN Politics's Chris Moody and Alexander Rosen promoted/paid tribute to President Obama's final State of the Union address by producing an online video in the style of movie director Wes Anderson. Moody narrated the video, which spotlighted a pro-ObamaCare moment from the President's 2015 speech to Congress, where Senator Marco Rubio and other Republicans refused to stand and applaud. It also touted Senator Rubio's infamous drink of water during the 2013 Republican response. [video below]

The two correspondents specifically emulated Anderson's 2001 film, The Royal Tenenbaums, in the CNN.com post, "The State of the Union Address as a Wes Anderson film." It began with an opening credits featuring quirky footage of many political leaders, including President Obama, Speaker of the House Paul Ryan, Vice President Joe Biden, and South Carolina Governor Nikki Haley, as they were being prepared for TV interviews [see screen cap of Ryan above]. They divided their video into "chapters," just as the actual Anderson movie was.

Moody narrated "Chapter 1," which was about U.S. Capitol. Rosen gave a voice-over for "Chapter 2," detailing how the State of the Union address is an outgrowth of an Article II, Section 3 mandate from the U.S. Constitution that the President "shall from time to time give to the Congress Information of the State of the Union." However, the Speaker of the Union needs to send a formal invitation to the chief executive before he can address the federal legislature.

"Chapter 3" gave general details on the speech, such as the House sergeant at arms introducing the President, and how "Democrats stand and cheer; Republicans sit and don't." This is where the two CNN journalist included the clip of Obama's 2015 address, where he claimed that "more of our people are insured than ever before." The Democratic members of Congress did, indeed give a standing ovation," and the Republicans remained seated. The ovation footage zeroed in on Senator Rubio's non-verbal reaction to the line.

Moody and Rosen continued with the several Republican responses in "Chapter 4." The began with a slowed-down version of Louisiana Governor Bobby Jindal's walk to the podium during his response to the President's 2009 State of the Union address. They played an 30-plus second excerpt from the song These Days by folk singer Nico (which was included in the soundtrack for The Royal Tenenbaums) to accompany the slow-motion edit of Jindal. The correspondent followed this with clips from Senator Joni Ernst, Rubio's sip of water, and Rep. Cathy McMorris Rodgers.

The final clip from the responses "chapter" was from the conclusion of former Virginia Governor Bob McDonnell's 2010 response, which he gave from the chamber of the Virginia House of Delegates in Richmond. Of course, McDonnell is currently appealing his conviction on federal corruption charges.

The Wes Anderson-style video included an epilogue, which noted that "next year, much like Wes Anderson movies, the State of the Union address will look and feel very familiar — with a different lead character, but many of the same faces."