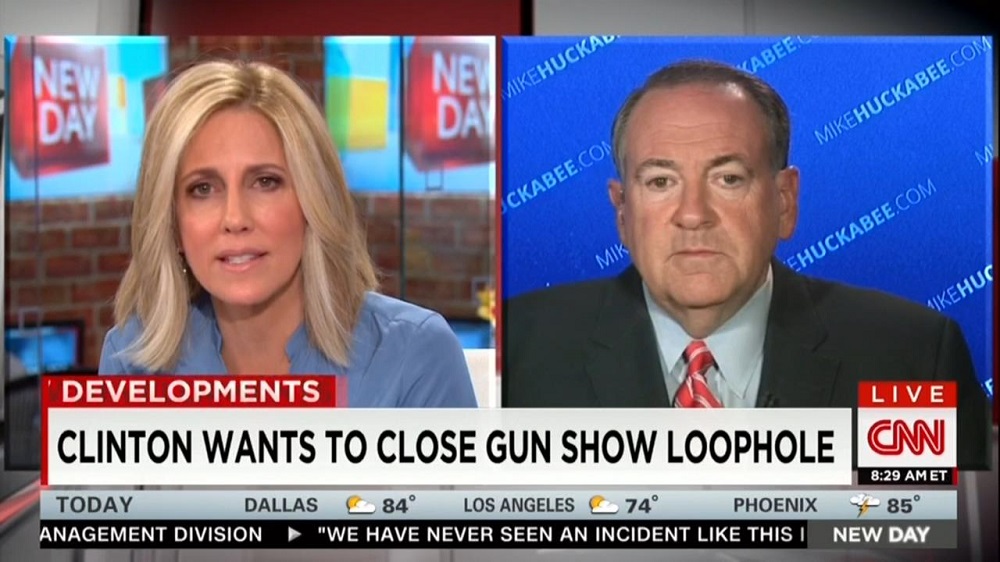 CNN's Alisyn Camerota touted Hillary Clinton's new gun control proposals during an interview of former Governor Mike Huckabee on Monday's New Day. Camerota pointed out Mrs. Clinton's "tighten the gun show Internet sales loophole" idea, and asserted, "Isn't that one a no-brainer?" She then asked, "Shouldn't there be universal background checks, and people not be able to buy guns online? Are you comfortable with that suggestion of hers?" [video below]

The anchor also attempted to argue against the pro-gun rights talking point that an armed individual could have stopped the mass murderer's rampage by citing how there was a veteran with a concealed-carry license who was "quite a distance away," in his words: "If he had drawn his gun and raced to the scene, he was afraid that he would have been shot by the SWAT team. You know, it doesn't always work that way – to think that...more guns would have stopped this crazed gunman."

Camerota's "no-brainer" label of the Democratic presidential candidate's gun control proposal came near the end of the segment with Huckabee:

ALISYN CAMEROTA: Let me show you what Hillary Clinton is proposing today. Okay – she's suggesting some gun control issues, so – and I want to get your comments: 'Tighten the gun show Internet sales loophole' – okay? Isn't that one a no-brainer? I mean, shouldn't there be universal background checks, and people not be able to buy guns online? Are you comfortable with that suggestion of hers?

MIKE HUCKABEE, (R), PRESIDENTIAL CANDIDATE: I mean, if it would prevent – but statistically, that has almost – virtually no impact whatsoever on gun crime. So, once again, I think that these are the kind of measures that get proposed because they sound good – but if you look at the figures, that doesn't really change the dynamics.

CAMEROTA: Okay. But – but you're still comfortable. You would be comfortable with that?...

HUCKABEE: I think it's up for debate.

She followed up by playing up a recent Quinnipiac University poll (she didn't actually name the source during the segment) that found that 93 percent "support universal background checks," and asked, "So, do you support those?" Huckabee replied, "As long as they're done without this extraordinarily cumbersome process, I think that can be done. And there have been a lot of proposals where it could be an instant background check. I think those are things that even the NRA has supported in the past."

It should be pointed out that Quinnipiac poll didn't ask specifically about "universal background checks," as Camerota put it. The poll actually asked, "Do you support or oppose requiring background checks for all gun buyers?"

Earlier in the segment, the CNN journalist brought up the taken-out-of-context remark by Jeb Bush on the mass shooting in Oregon. The former Arkansas governor responded to the issue by defending his Republican competitor:

CAMEROTA: Jeb Bush said basically, 'bad stuff happens.' Is that your feeling about these things, too?

HUCKABEE: Well, you know, I think that was taken out of context. Let me defend Jeb, and I'm – you know, an opponent of his in the primary. But he was asked a question. I think he probably would have worded it differently if he had it to do over, but I think what he was trying to say is – look, car wrecks happen every day. There are airplane crashes. There are things that happen – some which we can prevent; some we can't. But we can't – for example, we could stop most of the car wrecks if we restricted speeds down to 25 miles per hour. There would be very few car accidents if no car were allowed to go faster than 25 miles per hour. But as a society, we would never accept that. So sometimes, we have to decide, what risk are we willing to take?

This sparked an exchange between Camerota and Huckabee over his support for the Second Amendment. It's also where she brought up the concealed-carry issue:

HUCKABEE: No. I don't say that at all, Alisyn. The fact is, schools – I know we perceive that they're the most dangerous place, and it's worse than it's ever been. Statistically, that's simply not true.

Here's a figure I never hear talked about – two million times a year, the presence of a gun in the hands of a legal gun owner stops a crime – a violent crime. We never hear that part of it.

The fact is, every time we have had one of these shootings that the President mentioned, every one of them happened in a gun-free zone. So, you know, we can say we're going to have more gun-free zones, but that ends up being the worst thing – because it just gives the shooter a real confidence that he walks into that environment and he's the only one armed. Even in this case, it turns out that he shot himself. But it was only when the police confronted him that he did that.

CAMEROTA: Yeah. You know, Governor, there was someone actually in that vicinity. There was another student, who did have a firearm. He had a concealed-carry license – he was a veteran – and he talked about why he decided not to try to kill the gunman. So listen to this for a second.

UNIDENTIFIED MAN: We were quite a distance away from the actual building where it was happening and – which could have opened up us to be potential targets ourselves and – you know, not knowing where SWAT was on their response time, they – they wouldn't know who we were, and if we had our guns ready to shoot, they could think we were the bad guys.

CAMEROTA: I mean, there you go. That – that's a logical fear. If he had drawn his gun and raced to the scene, he was afraid that he would have been shot by the SWAT team. You know, it doesn't always work that way – to think that other – that more guns would have stopped this crazed gunman.

HUCKABEE: No – what he did was exactly right, because he was a distance away. He wasn't, like, in the presence of the shooter. And he did what everyone is trained to do, if you've had a concealed-carry permit. It's not to go brandishing your weapon as soon as – you know, you hear of something going on – and you're not a cop. You don't get to run to the scene.

But if you're at the scene and somebody starts shooting, and someone in that classroom had been able to bring a weapon out – you know, what we did have was a true hero. Chris Mintz, who was a ten-year army veteran, who ended up getting shot five times by this guy, but he – he tried to stop him. He physically tried to stop him. There were heroic actions in the midst of this, but nobody is suggesting that if you have a gun – you're a mile away – you jump in your car and you drive over and run out with your – you know, gun in the air. But gosh, that – that is a good way to get killed, because the cops don't know whether you're part of the active shooter scenario or whether you're a defender-

CAMEROTA: Look – I mean, that's the point – that it's chaotic-

HUCKABEE: So, no one is suggesting that-

CAMEROTA: Of course. I mean, it's chaotic when these things are unfolding-

HUCKABEE: Yes. Absolutely, it is!