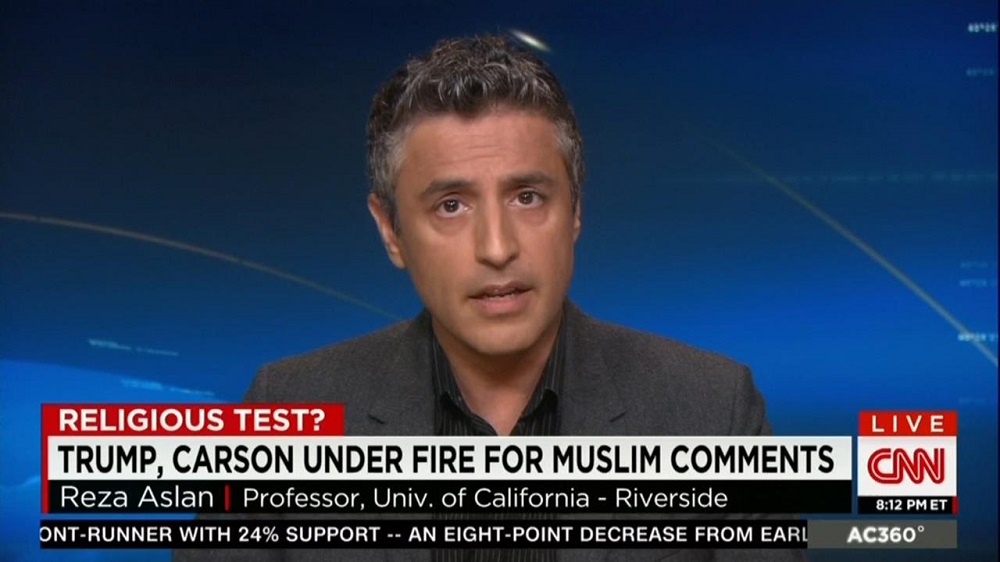 Anderson Cooper gave liberal author Reza Aslan a platform to bash Republicans on the Monday edition of his CNN program. Aslan asserted that Dr. Ben Carson's "I would not advocate that we put a Muslim in charge of this nation" remark is just the latest example that "xenophobia [and] anti-Muslim bashing...[is] how you get votes." He also stated that "the only thing I'm surprised about is that the..Muslim bashing has taken this long to come out in the GOP field." [video below]

Cooper introduced Aslan as a "religious scholar and best-selling author," but failed to disclose that the guest is developing a series with CNN titled Believer. The network describes the project as a "new spiritual adventure series" where the University of California, Riverside professor plans to "immerse himself into one of the world’s most fascinating faith-based groups to experience life as a true believer."

The anchor brought Aslan, along with former Ted Cruz staffer Amanda Carpenter and former Reagan adviser (and NewsBusters contributing writer) Jeffrey Lord for a panel discussion on the controversy surrounding Dr. Carson. Cooper first asked Aslan, "As a religious scholar; as a Muslim; as a American, what is your reaction when you hear Dr. Carson saying that he wouldn't support the idea of a Muslim president?" The guest wasted little time before targeting the GOP presidential field and grassroots:

REZA ASLAN, RELIGIOUS SCHOLAR: I'm not that surprised. In fact...the only thing I'm surprised about is that the – sort, of Muslim bashing has taken this long to come out in the GOP field. I mean, in 2012...we had Herman Cain saying that he would never have a Muslim serve on his Cabinet. We had Newt Gingrich promising a constitutional amendment banning sharia in this country. And frankly...the comments of Trump; and particularly, Dr. Carson, I think, are going to be rewarded in the GOP field....I think that their numbers are going to go up; and I think that, as a result, you're going to see the other candidates, sort of playing this game as well. The xenophobia, anti-Muslim bashing in the – the modern GOP today – sadly, that's how you get votes.

Cooper then turned to Carpenter, who obviously disagreed with Aslan's take. She underlined that Scott Walker's "dropping out of the race is a dramatic rejection of the direction that Donald Trump and Ben Carson have taken this party – particularly, with the Muslim comments, and just larger no control over their message....I think a lot of people are hitting the panic button now about Donald Trump and Ben Carson; and essentially, are rallying people to get out, figure out who the alternative is going to be."

The CNN host used his question to Lord to spark a back-and-forth over Trump's role in perpetuating the birther issue with President Obama:

COOPER: Jeffrey, I know you've said Dr. Carson is just flat out wrong about this. But as far as Donald Trump goes, when asked about the idea of a Muslim president, he says some people have – you know, said it already happened. Isn't that just kind of stirring the pot?

JEFFREY LORD, TRUMP SUPPORTER: Well, I'll tell you what's stirring the pot, Anderson. I have a column coming out tomorrow in the American Spectator in which I took a look at Reggie Love. Reggie Love was President Obama and Senator Obama's, as they call him in the trade, 'body man' – the guy who sticks with a candidate all the way through. He served both with the – in the campaign and in the White House with him. And he wrote a book of memoirs that came out this past January, and he recounts a personal fight between Senator Obama and Hillary Clinton – a very agitated discussion on the runway on the tarmac at Reagan Airport in which Senator Obama accused Hillary Clinton personally – and I'm quoting from the book directly – labeling him as a Muslim. In other words....he was accusing she and her campaign of doing this-

COOPER: Even if that's true, and it came from that-

COOPER: Eight years later, is it responsible to still be saying that?

LORD: Well – well, look, clearly – clearly, a lot of people feel this. Now, I – as I've said, I believe President Obama is a Christian. My problem with him is that in his past capacity as a Christian and a presidential candidate, he didn't act on Jeremiah Wright. He had the authority to get him booted from that church pulpit, and he didn't do it. And I'm sure – and I assume it was for political reasons....

COOPER: But Jeffrey, you are...dodging the essential question – which is, is it responsible for Donald Trump, eight years after – even if Hillary Clinton introduced this idea – to still be talking about it?

LORD: Well, I mean – you know, I mean, this is a choice of firestorms. Why are we talking about Donald Trump and not Hillary Clinton? She's a candidate in this race. And Anderson, I have to say – you know, we got, what? Ninety-two million people out of the workforce – this is the kind of conversation that people like us have. Here in central Pennsylvania, people aren't interested in this kind of thing. They're trying to – you know, get jobs, pay mortgages – do all of that sort of thing. This is the kind of conversations that – you know, the kind of thing that we talk about among ourselves in the media....

And I would add one last thing – I've said before – this is what Rush Limbaugh calls the drive-bys – you know, we pull up; we shoot; we cause all this excitement on a topic; and then, we move onto the next one. And that's what's happening here, and that's what's going to continue to happen, I imagine.

Cooper followed up by getting Aslan's take on Lord's point: "Reza, as somebody who is Muslim, I would imagine that there's a lot of Muslims who actually do care about this, and this is a big issue...So, I mean, do you think it's fair to say that this is just a media invention?" The liberal academic responded with another attack on the Republican Party in general, and Dr. Carson in particular:

ASLAN: It's not just Muslims who care. It's Americans who care. Actually, 66 percent of Americans disagree with Ben Carson, and say a Muslim can be president; 79 percent of Americans between the ages of 18 and 26 believe that to be the case. And frankly, Ben Carson, for a man who wants the job of enforcing the Constitution, doesn't understand it very well –  because what he said violates Article VI of the Constitution which says there shall never be any kind of religious tests for office. And more importantly, the inability to just simply say Trump's comments were wrong and stupid, and let's move on, is an indication exactly of what I said-

LORD: Well, what's wrong about them?

ASLAN: Which is that this is a winning argument.

What's wrong about it? It doesn't matter if people are saying that President Obama is a Muslim. People are also saying that there are UFO's. A responsible man running for office knows the truth, and would say, that is not the case.