MSNBC airs a bizarre video montage at the beginning of every episode of The Ed Show, but the program was especially outlandish on Monday and Wednesday, depicting President Obama as a series of larger-than-life figures. The liberal network first portrayed the chief executive as Superman standing on top of the White House, and later placed the Democrat's head on George Washington's body in the famed painting of the crossing of the Delaware River.

Two days later, The Ed Show lead segment repeatedly showed a graphic depicting the President as Uncle Sam, holding a pen in his boxing glove-covered hand: [video below the jump] 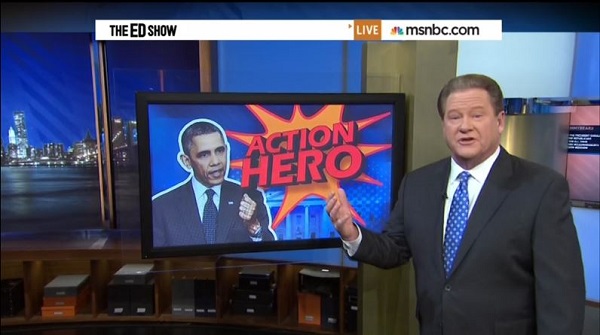 After the montage on both Monday and Tuesday, host Ed Schultz gave his commentary in front of a graphic trumpeting President Obama as an "action hero," and touted the liberal politician's controversial vow to take executive action on several issues, as a means to motivate Congress to pass his legislative agenda.

While MSNBC makes no secret of its pro-Obama stance, Schultz stands out in particular for being awestruck by the President. Almost two months earlier, the host compared the supposed comeback of ObamaCare to Auburn University's upset win over the University of Alabama two days earlier.

Back on September 13, 2013, Schultz bemoaned the Democrat's 45 percent approval rating at the time: "I just cannot believe this number. Seriously." He added that "it amazes me that people don't love Obama...It just amazes me he can't get above 50 percent when it comes to a favorable view of the economy."

ED SCHULTZ: ...The Republicans are in terrible despair right now. They don't have any plans, they don't have an alternative plan for health care. They can't stop this roll that the progressive movement is on and they are going to do anything they possibly can to block ObamaCare. Can we say that President Obama has 'em exactly where he wants 'em?

You know, it kind of reminds me of that 1971 movie Patton. It was played by George Scott. George Patton – was played by George Scott and General Patton was in the field, and he was watching Rommel bring his tanks into a trap. And General Patton put the glasses on, the field glasses and said "Rommel, you bastard! I read your book!" Our guy reads a lot, too. He's got these folks right where they deserve to be.

The screen caps of the Superman, George Washington, and Uncle Sam depictions of President Obama from MSNBC's The Ed Show on Monday and Wednesday: 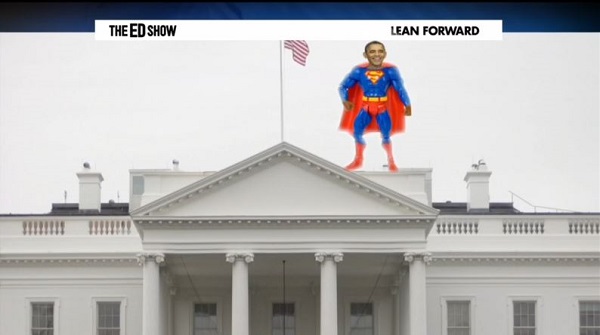 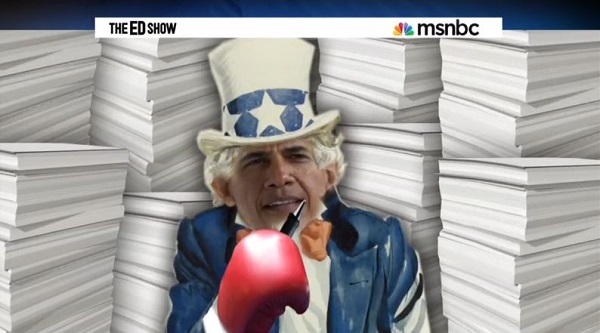