On Thursday's CBS This Morning, just hours after Mitt Romney's "crisp" debate performance, Norah O'Donnell stuck to her fixation on playing up the Republican's supposed negatives. O'Donnell maligned how Romney phrased his opposition to the federal government's subsidization of PBS: "This may have been the first time in a presidential debate that Big Bird was mentioned. It seems kind of like a silly thing to bring up."

Gayle King, an admitted friend of Michelle Obama and donor to the President's reelection campaign, also spotlighted a Tweet that referenced a decades-old anecdote about Romney placing his dog, Seamus, in a carrier on top of his car: "This wasn't a debate so much as Mitt Romney just took Obama for a cross-country drive strapped to the roof of his car."

Co-anchor Charlie Rose turned to National Journal correspondent Major Garrett for post-debate analysis. Rose acknowledged the consensus that Romney did well in his first question to Garrett: "So, what does the Romney campaign have to do now to take advantage of what everybody believes was a victory in the debate?"

Later, King chimed in by reading the Romney's-dog-on-the-roof Tweet, and continued by asking, "What is the spin that the White House is putting on what happened to the President last night to explain it?" 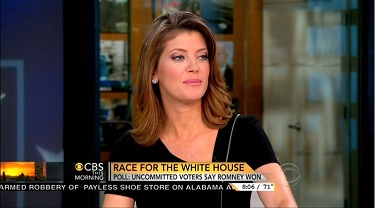 Towards the end of the segment, after using her "silly" label of Romney's Big Bird reference, O'Donnell wondered if "it an effective line by Mitt Romney, or did it obscure some of the larger fiscal challenges that this country is facing."

This is a misleading question from the CBS journalist, as the former Massachusetts governor made his Muppet reference in the middle of answer on federal spending. Here's the context from the NY Times transcript of the debate:

MITT ROMNEY: ... What things would I cut from spending? Well, first of all, I will eliminate all programs by this test -- if they don't pass it: Is the program so critical it's worth borrowing money from China to pay for it? And if not, I’ll get rid of it. "Obamacare" is on my list. I apologize, Mr. President. I use that term with all respect.

So, before PBS and Big Bird, Romney gave his broad criterion and singled out a large budgetary expenditure - the President's health care law. Leave it to O'Donnell to spin the Republican's answer as somehow "obscuring" the broader issue of federal spending.

The full transcript of the Major Garrett segment from Thursday's CBS This Morning:

ROSE: So, what does the Romney campaign have to do now to take advantage of what everybody believes was a victory in the debate?

GARRETT: Well, Charlie, there's a very simple answer to that, and two Romney campaign officials told it to me before the debate started. They said, if this night works for us, our biggest challenge will be not dousing the flame we set tonight, meaning, they know that they've internally messed up advantages and advantageous moments Mitt Romney has set for his campaign. So, they know now the most important thing between this debate and the next one is not to blow the momentum - to enhance it, to blow on that fire and make it larger and not douse it. That's the biggest challenge the Romney campaign faces.

ROSE: And so, what's the challenge for the Obama campaign?

GARRETT: To bounce back. Two very significant Democrats who I talked to last night, looking at the debate, said ,well, I would call the debate trading places. Mitt Romney's back was against the wall. Now, the President's back is against the wall, and he's going to have to have a much sharper, much more pointed, and much more passionate debate performance, or people will not have the confidence that he has what it takes for a second term and a vision to carry that through.

GAYLE KING: Major, let me read you a Tweet this morning. It says, 'This wasn't a debate so much as Mitt Romney just took Obama for a cross-country drive strapped to the roof of his car'. So, what is the spin that the White House is putting on what happened to the President last night to explain it?

GARRETT: Well, the White House knows that the President was on the low end of the energetic scale, and they're calling that presidential and slightly deferential. But that surprised a lot of us, who were expecting at least part of the President's performance to reflect that which his campaign has said about Governor Romney. There were at least ten lines of attack that the President left off the table completely - nothing about China, outsourcing, Bain Capital, 47 percent, exotic offshore business or tax shelter arrangements - all kinds of things that the campaign has been pounding Mitt Romney on that the President did not bring up himself.

And several Democrats I talked to last night, who are not on the Obama payroll, said the President's demeanor left the country with the impression that Mitt Romney is an acceptable alternative, whom the President disagrees with, where the whole tone of his campaign is yes, I disagree with you, but more importantly, you're an unacceptable alternative. Those who are closest to the President and wish him well know that dynamic is going to have to change in the second debate.

NORAH O'DONNELL: Major, this may have been the first time in a presidential debate that Big Bird was mentioned. It seems kind of like a silly thing to bring up. However, if you look on social media - whether it was Twitter, whether it was Google searches or even on Facebook - it was a term that was searched a great deal and you can see that graphic there. What does that tell us and – was it an effective line by Mitt Romney, or did it obscure some of the larger fiscal challenges that this country is facing?

There were things that Mitt Romney said in moments that may not have looked electric on camera, but that they can use downstream. Big Bird, and PBS and attacking things that most swing voters and independents like and tend to keep in government is something that they're going to mine in the future - when Governor Romney made a joke about getting a better accountant. Trust me, I think you'll see that showing up in either campaign stump speeches or advertisements - endorsing in ways that he hadn't before and as explicitly as before, Paul Ryan's voucher mechanism for Medicare retirees ten years from now. These are things that the Obama team believes, like with Big Bird, Governor Romney said and they can use against him - not in the moment of the debate, but downstream, in preparation for the second debate. Like I said, that's the long game; that's the nuanced answer; that's the nuanced spin for what they know internally was not a great night for the President, and to make it better, they have a lot of work ahead of them.

ROSE: Do you think, Major, that the President was surprised, coming out of the block, by Romney's performance, and therefore, was simply taken aback and never got back on stride?

GARRETT: Well, as Bill [Plante] said, incumbents often have problems in their very first debate. It is not unusual for presidents to be somewhat taken aback by the idea of someone standing right across from them and telling them that they're wrong. That's not a typical experience for presidents in the Oval Office. It's exactly the opposite. So, I think the President was taken aback, and when your challenger is funnier than you on the 20th anniversary of your wedding, you know you're off to a bad start. [Rose and O'Donnell laugh]