Anchor Erica Hill gave actress Jane Lynch a platform on Tuesday's CBS This Morning to laud President Obama's flip-flop on same-sex "marriage." Hill set it up by citing a recent Tweet from the open homosexual: "You weighed in...on Twitter actually and you thanked him [Obama] for the dignity that those words brought you." Lynch gushed, "I really felt it.....It really moved me. It touched me." [audio available here; video below the jump]

Obama supporter and co-anchor Gayle King herself waxed ecstatic over the presidential announcement in her follow-up question to Lynch: "Did you think, he's talking to us?" King also complimented the television personality over her new book, and singled out a detail in it about the "wife" of the actress: "I love, in the book, that you actually have the picture of when you two first met."

The morning show put the actress's Tweet on the screen as Hill brought up the subject: "Pretty darn happy today. Thanks Mr President, for supporting the dignity of my family and so many others!" Lynch sang the President her praises in reply, and added to it when King followed up with her beyond sympathetic question: "I kind of look at it as just another issue. I take it a little personally, but- you know, this should change. But it felt, like I saw Andrew Sullivan on the Chris Matthews Show, he started to cry, when he was talking about it."

Hill even asked about the response of Lynch's adoptive daughter to Obama's announcement: 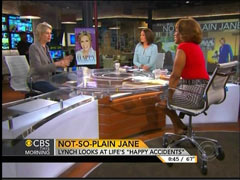 HILL: Did your daughter have any reaction?

LYNCH: No, not really. You know, my daughter is unquestioning about this stuff, you know? And she's growing up in Los Angeles- we're teeming with gay people and straight people and-

KING: For her, this is our family.

LYNCH: This- you know, we are living the TV show 'Modern Family.' You know, we've got every stripe of family, you know, in our neighborhood.

Earlier in the interview, King enthusiastically asked her guest about how she met her "wife":

KING: We have to talk about your wife, Lara [Embry]....because I love, in the book, that you actually have the picture of when you two first met.....You were at a charity- talk about 'happy accidents'- because, you know, she's there and you're there. And she was a charity winner. She had won something.

LYNCH: Yeah. She won an award....She was being honored from the National Center for Lesbian Rights for the work she had done in Florida for gay adoptions, and I was giving an award to Ilene Chaiken, who was the creator of "The L Word" [the TV show]. And so, we've- all get together and have our portraits taken, and they said, would you two like to take a picture together? Well, Lara actually said, I want to take a picture with her, which was very nice. (Hill and King laugh) And we yucked it up for the camera and I said to her- and I was immediately smitten- and I said, we'll get to tell our children ten years from now- very presumptive of me- that this is the moment we met. And indeed....I have a child now, as a result of this marriage.

[Update: The transcript of the relevant portion of Erica Hill and Gayle King's interview of Jane Lynch on Tuesday's CBS This Morning, starting at the 43 minutes into the 8 am Eastern hour mark, is available at MRC.org.]