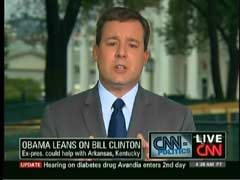 On Wednesday's American Morning, CNN's Ed Henry lauded former President Clinton as "one of the best politicians the Democrats have ever had...in the last quarter century" and touted his apparent credibility over current President Barack Obama. Henry also speculated that if "Al Gore...had used President Clinton more in 2000, he may have been president."

Substitute anchor Drew Griffin brought on the White House correspondent 26 minutes into the 7 am Eastern hour to discuss the Obama White House's intention to "aggressively use the former president on the campaign trail over the next few months. One party official familiar with the plan calls it a- quote, 'no-brainer.'" During the second half of the segment, Griffin asked, "How can Bill Clinton do it all? I mean, he was picked by President Obama, basically, to rebuild Haiti. Now, they seem to be yanking him off of that and heading him out to the campaign trail, just to save the Democrats in the House in November."

Henry used the "no-brainer" quote from the unnamed Democratic Party official in his answer and immediately proceeded to use his superlatives about Clinton:

HENRY: Well, they're careful here inside the White House to say that they don't want to yank him off the Haiti job or any of his other important Clinton Foundation work, for example, altogether. They just want him to fit it in, because they say- look, as you noted, it's a no-brainer.

This is one of the best politicians the Democrats have ever had- you know, in the last quarter century. And, as President Obama faces these credibility questions and all these various national polls right now, and as he tries to make this case that there is a real choice between the Democratic message and the Republican message, people inside the White House say there's no one better at making that case, that contrast between the Democrats and the Republicans, than Bill Clinton. So they want to use him early and often, and they point to what happened in 2000 when Al Gore had trepidation about using Bill Clinton- sort of backfired on him, blew up in his face. If they had used President Clinton more in 2000, he may have been president, Drew.

Is Henry forgetting and/or brushing aside Clinton's own credibility issues, such as his law license in Arkansas being suspended for five years after he lied under oath about his affair with Monica Lewinsky?

Griffin followed through by asking about the current Democratic occupant of the White House: "You know, I can't resist, Ed, but what about using President Obama, the current president? He just doesn't have the clout?" The CNN correspondent acknowledged Obama's failing poll numbers, but then touted him as still being more or less equal to former President Clinton:

HENRY: ...Clearly, he's facing these credibility questions because of all these national polls you've been talking about. The ABC one yesterday saying 6 in 10 Americans basically don't have faith in this president right now to make the right decisions. They're pushing back on that, obviously, inside the White House, and saying- look, they're going to send him out on the campaign trail. But there's certain states like Arkansas where President Obama is just deeply unpopular- lost to John McCain there by double digits. And so, they see it as a one-two punch. President Obama will be out there in some states, Bill Clinton will go to other ones, Drew.