Jack Cafferty Just Can't Get Over His Anti-Palin Obsession 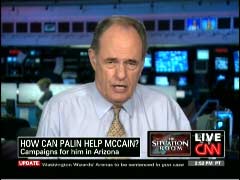 The CNN personality, who devoted 35% of his "Cafferty File" segments over a month period in 2008 to bashing the former Republican vice presidential candidate, couldn't resist devoting his 5 pm Eastern commentary to Palin's Friday appearance with McCain in Arizona. After getting out of the way the obligatory references to her Fox News gig and her upcoming television series on TLC, Cafferty unleashed hell upon his nemesis on the right, pointing to her as the sole cause for the senator's failed presidential bid, and even omitted that she is the former governor of the 49th state:

CAFFERTY: History might suggest that John McCain had a pretty good chance at becoming the next president of the United States, once upon a time. Then he heard about the mayor of Wasilla, was smitten, suffered a total lapse of judgment, and asked Caribou Barbie if she'd like to be the vice president. Well, she jumped at the chance, and that was the beginning of the end of McCain's chances. Palin did a couple of interviews on the CBS Evening News with Katie Couric, and presto! Obama was in.

After noting McCain's challenge in the upcoming Republican primary for the Arizona senate race, the commentator kept up the fire on Palin: "Sarah Palin, in addition to being virtually without qualification to hold elected office, is also one of the reasons for the deep divisions in this country. She inflamed the conservative base of the Republican Party with irresponsible comments about things like government death panels- government wants to kill your grandmother. She's a lightning rod for criticism and controversy. Who needs this?"

Most of the viewer responses that Cafferty read near the end of the hour came from the bash Palin camp, who even took turns taking shots at her former running mate:

CAFFERTY: The question this hour is, what can Sarah Palin do for John McCain that she hasn't already done? (laughs) I love this question.

Vanna in California: 'I find this unbelievable. Actually, it'd be funny if his job wasn't so important. He has truly lost his mind, or what was left of it. Just makes me that much happier he never made it to the White House.'

Tim in Toledo writes, 'McCain's obviously a slow learner. She will give him exactly what she gave him during the presidential election: an increased chance at losing. Maybe that's what he wants.'

Bruce in Oregon says, 'Give the old chameleon the coup de grace? She is one toxic specimen.'

Raffi in Montreal: 'Ask not what Sarah Palin can do for John McCain, ask what John McCain is suffering from.'

Ada writes, 'She can help him lose. McCain needs to stay home. It seems he has a learning disability. This woman brought him down before. He's calling on her again? Something is wrong with this man. She is only in it for herself, she even abandoned the Alaskan people before her term was over. With Sarah, it's all about the money.'

Tom in Ohio writes, 'Put a Democrat in his seat. (She's got some experience in this area).'

Mike writes, 'I qualify this as an assisted suicide!'

And Sandy writes, 'I'm sorry CNN. I had to turn you off when you covered the Palin speech. She makes my ears bleed and causes melting of the brain. Poor McCain- I used to have so much respect for him.'

On the other hand, Cafferty has also been on a tear against House Speaker Nancy Pelosi over the past months, so there's some balance to his bashing.
Campaigns & Elections Labeling Conservatives & Republicans Bias by Omission 2010 Congressional CNN The Situation Room Sarah Palin