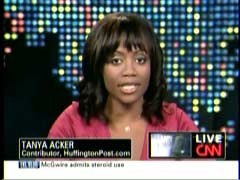 The Anderson Cooper 360 blog on CNN.com capped a leftward trend during the week of March 1 with a post on Friday from Obama supporter Tanya Acker, who accused pro-life activists of "racial paternalism" for highlighting the high abortion rate among blacks. Earlier in the week, the blog promoted the latest anti-conservative study from the Southern Poverty Law Center and sought anti-Jim Bunning sob stories.

Acker, an AC360 and Huffington Post contributor who has ranted against John Boehner and Sarah Palin, and lauded Van Jones in recent weeks on her Twitter account, blasted "anti-choice activists" in the blog entry titled "Thank you very much, but we can think for ourselves: African-American women and choice." The attorney and Obama supporter (the AC360 blog mentioned this detail at the beginning of her May 9, 2008 entry, but it hasn't come up since) wasted no time in insinuating that racism motivated a new pro-life billboard campaign noting the high black abortion rate:

In an attempt to exploit racial fears and perhaps assume for themselves the broad legitimacy of a civil rights movement, anti-choice activists are now targeting African-Americans – claiming that the exercise of reproductive freedom by African-American women is effecting a 'genocide' in the African-American community....While I do not dispute the sincerity of many in the pro-life movement, this attempt is cynical, misguided, and dangerous.

Later in the column, the CNN contributor went out of the way to defend the work of Planned Parenthood in minority communities. She also leveled her "racial paternalism" argument against pro-lifers.

While anti-choice activists may condemn the location of family planning clinics, such as Planned Parenthood, in these communities, this condemnation is itself further evidence of their cynicism – and of their indifference to the actual health care needs of low-income women (a disproportionate number of whom are African-American). The majority of health care services provided by Planned Parenthood, for instance, are non-abortion related and include cancer screening, STD testing, and other preventive health services. We may agree to disagree about the morality of abortion but I do hope there is no legitimate disagreement about the need for low-income women to have access to these health resources.

There is yet another element of this campaign that I find particularly unsettling. Implicit in this strategy is the assumption that the womb of an African-American woman is somehow "community property" – and that our family planning and reproductive decisions cannot properly be based upon individual choices and circumstances but must instead take into account the need to "propagate the race." It seems as if anti-choice strategists are suggesting that African-American women need to be saved from themselves and their own freely made choices – or worse yet, that the African-American community needs to be saved from its women. Forgive me, but the time for that sort of racial paternalism is long since past.

There are real issues of concern affecting African-Americans today – inadequate access to health care, disproportionate incarceration rates, a substandard public education system (which is the only option for many of its children), and numerous others. Cynical attempts to exploit those problems so as to gain advantage in a contentious debate are no substitute for the real attention our community deserves.

Acker's argument echoed that of Dr. Artis Cash of Al Sharpton's National Action Network, who appeared on the February 24 edition of American Morning opposite Catherine Davis, director of minority outreach for Georgia Right to Life. Cash blasted pro-lifers during the panel discussion: "...For this organization to demoralize and criminalize the African-American female is just uncalled for....I don't know how this group could come in and now change our agenda when we have an agenda. Our agenda is that double-digit unemployment that exists in the black community."

Three days earlier, on March 2, the AC360 blog excerpted the latest report by Mark Potok of Southern Poverty Law Center which connected the tea party movement to an "an explosion of new extremist groups and activism across the nation." The same day, the blog also sought responses from people who have lost their unemployment benefits due to Senator Jim Bunning's opposition to a $10 billion emergency measure: "Have you lost your unemployment benefits as a result? We want to hear from you! Let us know."
Abortion Race Issues Liberals & Democrats Conservatives & Republicans Culture/Society Racism CNN CNN.com Artis Cash Tanya Acker