Larry King to Michael Moore: 'You are Our #1 Propagandist' 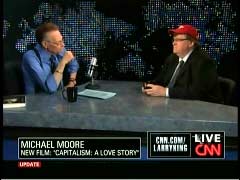 CNN’s Larry King fawned over Michael Moore during an hour-long interview on his program on Wednesday, calling the leftist’s latest feature “a brilliant documentary,” and went on to label the director “our number one propagandist.” King encouraged all of his viewers to see Moore’s “Capitalism: A Love Story,” which was released in New York City and L.A. earlier that day.

The CNN anchor led his 9 pm Eastern program with his gush over the apparent magnificence of Moore and his latest documentary: “I’ve seen this movie, and I’ll tell you, whether people agree or disagree with it- and there will be people who disagree- this is a brilliant documentary. You are our number one propagandist, in the good sense that a propagandist presents their viewpoint very well. Maybe no one does it better.”

The director posted a Tweet about his appearance on the CNN program, and returned the favor to King: “He [King] saw ‘Capitalism,’ called it ‘excellent’ and told his viewers to go see it. A legend and a nice guy.’”

Despite his obvious bias against the American free enterprise system, Moore did have a word of criticism towards his fellow leftists on the issue of the Tea Parties, after King asked him about them: “I think everybody has a right to get involved....I don’t know how much that’s being funded by certain interests associated with the health care industry, but- nonetheless, these are people who are standing up for what they believe in, and liberals should quit complaining about that and say- you know- hey, we’re the majority. Where are we? Why- why aren’t we going to the town hall meetings? Why aren’t we standing up for these things?”