During the two minutes between Roland Martin and Jeffrey Toobin’s two attacks on Sarah Palin after her speech at the Republican convention on Wednesday night, veteran journalist Carl Bernstein also criticized Republicans, since in his view, the Alaska governor’s speech demonstrated "that the Republican Right is running this election." CNN correspondent John King then reacted to Bernstein’s assessment, and offered some constructive criticism of the difference in coverage between the two conventions: "...[L]anguage matters in what we do, and I don't necessarily disagree with the point of what Carl was saying -- but we do speak a different language when we talk about this party [the Republican Party], and I think that's why we're often criticized." He then scolded the media in terms of labeling:

KING: To say the Right is running the Republican campaign -- if that means these people are the Right, then Carl's exactly right. But we didn't say, during the Democratic convention... all those delegates down on the floor -- you know, many of them were members of the Left.

Bernstein, after making his "Republican Right" comment, labeled Palin a "cultural warrior," and continued using the mantra in the press about the governor’s qualifications: "[S]he showed she's going to be a great cultural warrior, which is something very different than a qualified vice president. She might be a great Republican Secretary of the Interior -- 'drill, drill, drill' -- but ask the question -- and I think the Democrats will ask this -- suppose something happens to -- were to happen to John McCain between now and the election. Would this be the Republicans' candidate for President of the United States? At some point, we're going to go back to the qualification question." 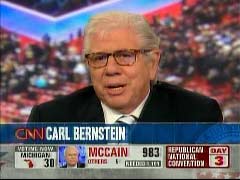 The veteran journalist then issued a lament of the "culture warrior" aspect to Palin’s speech: "A great cultural warrior speech -- the tragedy of this election might be that we have now returned in this country to the cultural warfare that John McCain, above all other politicians in this country, said had to end, as has Barack Obama, and now, it looks like we're really fighting it out."

John King then made his "language" remark, and went into detail about his point: "To say the Right is running the Republican campaign -- if that means these people are the Right, then Carl's exactly right. But we didn't say, during the Democratic convention, the teachers' unions and the SEIU and the AFL-CIO -- are they running the Obama campaign? And all those delegates down on the floor -- you know, many of them were members of the Left."

ANDERSON COOPER: I will also say I didn't hear people talking about who was the speech writer for any of the Democrats' speeches.

COOPER: It seem we're only highlighting who the speech writer is for her speech.