Does ‘When We Rise’s’ Failure Signal End to the Culture’s Long ‘Gay Moment?’

Is the media’s long “gay moment” finally over? Last week when Disney breathlessly let it be known the new live action Beauty and the Beast had a “gay moment,” the reaction came more in the form of resigned sighs than outrage or applause. Could it be that after a decade of gays being constantly feted in the media, wildly overrepresented on TV and in movies, and their agenda pushed into even kids’ cartoons, America finally has reached LGBT (and sometimes Y) fatigue? 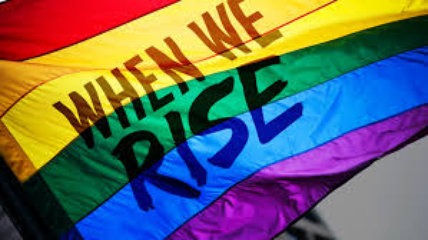 But the far more visible failure is ABC’s over-hyped gay agenda mini-series When We Rise, which crashed like a cheap Pride Parade float last week. Heat Street said the series, created by Dustin Lance Black, “flopped on Monday,” lost “almost one million viewers from on Tuesday and drew a “pathetic” “audience of only 2.05 million on Wednesday.”

What happened? Well, perhaps people do not like to be hit over the head repeatedly, even if the club used has pretty rainbow colors. Heat Street surmised that “viewers don’t respond well to ‘virtue scheduling’ on TV. When We Rise at times resembled an infomercial for GLAD (Gay and Lesbian Advocates and Defenders).”

And the series was full of stock LGBT bugbears. Reagan didn’t care about AIDS; Jerry Falwell, the pope and the police were all out get the gays. Each episode had its evil Republican villains, and ignorant, fearful Christians. But it’s no easy task to pull off an us-versus-them tale when you view most of the audience as part of “them.”

The truth is, When We Rise was as self-absorbed and entitled as the LGBT movement it chronicled – utterly lacking empathy for anyone who’s convictions don’t allow them to fall in line with the agenda. Thus, gay marriage wasn’t enough, they had to make Christians bake the cakes for those weddings. Rather than persuade, Black et al used the opportunity of When We Rise to slander Middle Americans as benighted cretins brimming with hate for gays.

The truth is, Dustin, we’re benighted cretins who just aren’t that into you – one way or the other.