Author Tim Wise said on Monday's OutFront that the historical depiction of Jesus as white has resulted in slavery and genocide and "speaks to the entire history of white supremacy."

"Here's the reality. The image of a white Jesus has been used to justify enslavement, conquest, colonialism, the genocide of indigenous peoples. There are literally millions of human beings whose lives have been snuffed out by people who conquered under the banner of a white god," Wise claimed.

He added that "black folks can think Jesus is black and view Christ as black, but at the end of the day, the image that has been used to dominate Christianity in this world and on this planet is the white image."

Wise was on CNN to discuss Fox anchor Megyn Kelly's controversial claim that Santa Claus and Jesus were white. Back in July, he said on CNN that the Supreme Court "basically called 40 million black folks that word [the N-word]" by striking down Section 4 of the Voting Rights Act.

Joining Wise in his backlash against Kelly, filmmaker Rochelle Oliver accused her and others of racism against black people:

Below is a transcript of the segment, which aired on OutFront on December 16 at 7:35 p.m. EST:

JAKE TAPPER: Fox News anchor Megyn Kelly, who caused quite a stir for suggesting that Santa and Jesus were white, is taking on her critics. She insisted on her show Friday that the whole controversy was motivated by race-baiting and because she works at Fox. 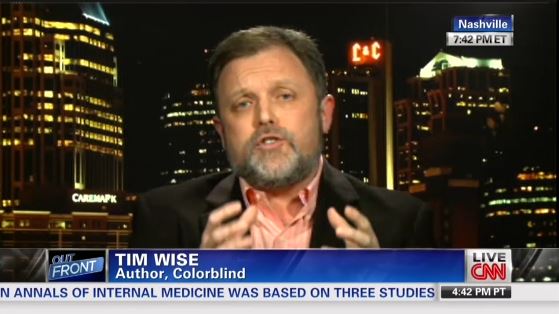 TIM WISE: What Megyn Kelly said was very simply, quote, "Santa is white," end of quote. And so is Jesus. So, I think the real issue, if you want to make a joke about Santa's whiteness, here's a way to do it that would not presume white normalcy or that white is the norm. You could say for instance, and I would, that if there were Santa, he'd have to be white because no black man could break into millions of homes, even if he was bearing presents, and not be shot by some neighborhood watch captain. That's a way to be funny.

But Fox News would never do that because that would presume that they had to admit racial profiling and racism were real. So there's that. I think the real issue was that she made a statement of fact, not for her own opinion, but fact. There's a difference between believing in Santa or Jesus or the Buddha. Buddha did not come from Kansas. Jesus was not born in a manger in central Pennsylvania. He was a man of color. And the fact that we have represented him for centuries literally as a white man speaks to the entire history of white supremacy.

TAPPER: Okay. Rochelle, I want you to respond to the points being made. I would like to say also that – I mean, many cultures throughout the world represent Jesus and Santa as their own culture, whether it's Latinos or African-Americans or Africans or whites.

TAPPER: So but, Rochelle, please weigh in.

OLIVER: Megyn Kelly did say that Santa is just white. She was very clear about that. And the fact is where can talk about that this is Santa and this is a fictitious character, but the real issue here is that people who think like Megyn Kelly believe it's more comfortable for them to believe that there is a white man flying around the earth with magical reindeer than to believe that a black man in the year 2013 can actually be kind, can be loving and can actually be caring toward children. That's really the issue here, not only –

ROBBINS: That is absurd that you're actually saying this right now.

OLIVER: Big-ups to my Jamaican Santas, sak pase to my Haitian Santas, and you know what? (Unintelligible) to my Cuban Santas, because I'm in Miami, and every corner reflects the community. And, you know – how – the characters of kindness and love and caring are not exclusive to the white race. And that's what was wrong with what Megyn Kelly says. And she didn't apologize for that. She merely defended her point.

WISE: Here's the reality. The image of a white Jesus has been used to justify enslavement, conquest, colonialism, the genocide of indigenous peoples. There are literally millions of human beings whose lives have been snuffed out by people who conquered under the banner of a white god.

That is a far more significant problem than whether a black writer in 2013 suggests somewhat humorously but perhaps seriously that we should change Santa to a penguin. No one is going to die because of that iconography. The white Jesus, white god imagery has resulted in death. That's something folks ought to deal with.

OLIVER: That was great. Tim, I'll go. It sounds awesome.

TAPPER: Without defending genocide, let me just ask you to – I read something interesting in an interview with the scholar Reza Aslan who is I think it's fair to say, not a conservative. And his argument in an interview The Washington Post ran with him was that Jesus was from Galilee and probably looked like a Palestinian Jew. But Christ is what we make of him, and that if there are Asians who are Christians, they celebrate, they worship an Asian Christ, same thing with South Americans, same thing with whites. Do you think there's something inherently wrong – I understand what you're saying that a white Jesus has been used to do horrible things, but –

WISE: No, Reza's right. But the difference is that the power of others to make Jesus or to make Christ as they view him has never come close to the power of the European power to make Jesus white. In other words, black folks can think Jesus is black and view Christ as black, but at the end of the day, the image that has been used to dominate Christianity in this world and on this planet is the white image. So, therefore, you can believe – you can think Jesus looks like whatever you want or that Christ looks like whatever you want.