What?! Piers Morgan Falsely Claims Virginia Had Highest Murder Rate In U.S. for 2009

When guest A.W.R. Hawkins cited Virginia as an example where violent crime fell in 2012 as gun sales increased, Morgan answered that "It's Virginia, the very state you just quoted to me actually has the highest murder rate in the country. According to 2009 statistics by the FBI." Morgan's assertion was entirely false, according to the FBI's 2009 report on crime.

The FBI's 2009 Crime In the United States report placed Virginia behind 23 other states plus Washington, D.C. and Puerto Rico in the murder and nonnegligent manslaughter rate per 100,000 inhabitants. And in case Morgan was referring to the firearm murder rate, Virginia still did not have the highest in the country.

Interviewing Hawkins, Morgan said it was "disconcerting" to hear that gun sales jumped in Newtown, Connecticut after last year's school shooting: "This situation in Newtown, is it not disconcerting that in the very place where we saw this horrendous massacre that we see such a spike in gun sales?"

On Tuesday, Morgan also used an accidental shooting by a gun safety instructor to push his gun control agenda. "Of course," he tweeted of the news of an instructor accidentally shooting a student in Ohio.

[UPDATED: 8/15/13 6:38 p.m. ET] Over 38 hours after Piers Morgan claimed that Virginia had the highest murder rate in the country in 2009, he admitted on Twitter that he was wrong, with his "apologies to @AWRHawkins". He added that he will apologize on air during tonight's show.

Below is a transcript of the segment, which aired on August 13 on Piers Morgan Live at 9:19 p.m. EDT:

PIERS MORGAN: Nearly eight months after the massacre in Newtown there's been a spike in the desire to own guns in Connecticut. Statewide, over 90,000 guns have been authorized for sale. You know how I feel about this issue. Well, joining me now is a man who couldn't disagree with me more. He believes that more guns equals less crime. On "The Grill" tonight, A. 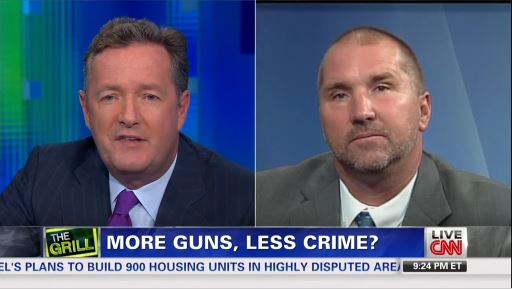 W.R. Hawkins, Breitbart News contributor with a PhD in military history. Welcome to you, Mr. Hawkins. Tell me first of all about the situation in –

AWR HAWKINS, Breitbart news contributor: Thank you, Piers. Great to be with you.

MORGAN: Yeah. This situation in Newtown, is it not disconcerting that in the very place where we saw this horrendous massacre that we see such a spike in gun sales?

HAWKINS: Well, I'm attracted to these stories on gun sales as in Virginia, as in the other states that you mentioned because they demonstrate that more guns equal less crime, and I think it's important that we understand that when you or President Obama or whoever supports forcibly disarming the American citizenry, we make the vulnerable more vulnerable. We make the weak or those prone to attack more prone to attack and that's especially true of women.

And, Piers, that's what's really on my mind when I think about the fact that when we take guns away women cannot defend themselves. The numbers bear that out. And gun control will never fix this. Gun control never makes the vulnerable less vulnerable. It always makes them more vulnerable. For me, I want to see not just men but women be able to defend their lives with guns as needed and that means they need access to them. As they have access to them, we see more guns less crime.

MORGAN: How do you explain then that so many other countries that have brought in tough gun control have seen gun crime dramatically reduced? And I'm thinking of Great Britain. I'm thinking of Australia, Japan and Germany. I mean, there are dozens of countries that have gone the complete opposite way to America and seen a dramatic reduction in the gun murder rate. Why not America?

HAWKINS: Well, I think that's a great question. Let me tell you a story and then I can answer that. The story is real fast. The first week of January, there was a woman in Georgia. A gentleman was breaking into her home. She grabbed her two kids, she swept them up. She ran into the attic. The intruder came to the house. He started kicking in the attic door.

MORGAN: Why don't we take a woman who was in this very position, a woman who armed herself to the teeth, as it turned out, to protect herself exactly in the way that you're talking about. She bought six guns, legally including an AR-15 assault rifle and had them in their home specifically to protect herself, as you put it, from other people who may have guns. What she hadn't realized was that her deranged son who had severe mental issues, clearly, Adam Lanza, was going to steal her guns, walk up to her bedroom, shoot her dead in the head and then go to the local elementary school and shoot 20 children and six teachers. So your argument that the presence of guns makes women safer, in that case, looks ridiculous.

HAWKINS: Well, it doesn't, Piers, because the situation I quoted to you was real just as the situation you quoted to me. What we have to understand, gun control is ultimately a war on women, Piers. That's a true statement. Because it makes women who are prone to attack more prone to attack and prone to more frequent attack. They have no way to defend themselves. Let's go across the pond to your country. You touched on it earlier. If I go across the pond and I look at England and Wales, for every 100,000 people, Piers. For every 100,000 there are 775 violent crimes. That category includes sexual assault. Those are crimes against women.

Now if you look at those same numbers in America for every 100,000, there are 383 violent crimes, that's less than 50 percent of what we see over – across the pond, Piers. What's the difference? The difference is here women can shoot back. You chase them into an attic they are going to shoot at you to protect their own lives and the lives of their children. And I'm just telling you, Piers, my opinion – and I bet you share this opinion with me. My opinion is that those women should be able to arm themselves. They should be able to defend their lives and their bodies.

MORGAN: Yeah, see, my problem is I don't want to see all the women in America armed with guns. Because unfortunately where there are guns, as we know, even in domestic environment in America, in homes, there is a much higher incidence of suicide with guns, of domestic violence with guns, and so on. So it has the complete opposite effect to what you're saying.

And also on this comparison that you have drawn between Great Britain, say, and America, how do you explain this fact that in Britain we have on average 35 gun murders a year and very, very tough gun control including a ban on handguns and all assault weapons? And in America where you have very lax gun control, you have 12,000 gun murders a year? How does that work in your warped twisted logic? Explain to me.

HAWKINS: Well, it's a great question, Piers. Let's look at Virginia. That's what we started with. In Virginia, there was a 16 percent increase in gun sales in 2012. That's 490,119 guns were sold. Now you would expect, the way you speak, Piers, for violent crime to rise proportionally. It didn't. It fell 5 percent. There were 4,378 incidents of violent crime. That includes those –

MORGAN: Which state has the highest murder rate in the country, according to the FBI? Do you know? In America?

HAWKINS: No, I haven't looked at those stats on that. But I can tell you this, Piers.

MORGAN: Allow me. Allow me to help you.

HAWKINS: I mean, look at Chicago, where gun con –

MORGAN: Allow me to help you. It's Virginia.

HAWKINS: Can I say one other thing, Piers?

MORGAN: Well, no, because here is the point, Mr. Hawkins. It's Virginia, the very state you just quoted to me actually has the highest murder rate in the country. According to 2009 statistics by the FBI.

HAWKINS: The good news is that that murder rate went down because they had more guns and it resulted in a 5 percent decrease in violent crime. You want to look at a state with gun control, look at Illinois but particularly look at Chicago. In 2010 there were 1,440 sexual assaults in one year. In 2011 there were 441 murders.

Piers, think about this and I know – I know this matters to you. 10 percent of those murders were women, 10 percent of those victims. I would prefer that those 44 women had guns to defend their lives. In 2012 it was 512 murders, 51 of those persons approximately were women. I would prefer that those women have guns to protect their lives. Piers, Gun control is a war on women and it's a war we need to quit fighting.

MORGAN: Yeah, I would tell that to the families of the women who were killed at Sandy Hook. I'm not sure they would see it quite the same way. But Mr. Hawkins, thank you very much indeed for joining me.

HAWKINS: Thank you, Piers, I appreciate it. Thank you.